As loyal followers of the Devin Townsend Project immerse themselves in the band's latest opus, Transcendence, there's plenty of lip service being paid to the musical genius that is Devin Townsend. Standard routine some 20+ years into his career, but even though it's the man's name on the marquee Transcendence isn't a solo affair featuring his long time backing band. This time out Townsend opened up his creative process to input from his Project mates - Dave Young (guitars, keyboards), Brian Waddell (bass), Ryan van Poederooyen (drums) and Mike St. Jean (keyboards) - to create what many fans and critics have said is DTP's strongest album in years. Together since 2008, this is the Devin Townsend Project's seventh album to date but only their first working as a unit in building an album from the ground up, perhaps making it seem that Townsend is a late bloomer when it comes to the concept of teamwork. As one might expect of a musical genius...

"The Devin Townsend Project didn't start with writing together as the intention" says Townsend. "If we had started with that intention and it took me 10 years to finally implement it I'd be an asshole, but it started as the Devin Townsend Project playing all sorts of stuff from different stages of my career live, and everybody was on board for that. The decision to open things up in the way that I did for Transcendence was moreso out of 'What do we do now?' I've got all these projects that I'm really excited about doing, but DTP had gone pretty okay for us. It's a healthy environment in a lot of ways; it's not toxic emotional content, it has an audience, so to not continue it would have been a mistake for me professionally let alone musically. But, in order to make it count in ways I can still get behind I need a theme of some sort, something to sink my teeth into, and collaborating with the other guys became that something. After I wrote the book (Only Half There) and being able to look objectively at these things I'd written down, my objectives musically or otherwise are that I don't want to keep doing the same thing over and over and over again. It seemed like an interesting thing to do, plus these guys have put in a ton of work and a lot of money into DTP, so it made sense."


Townsend has said numerous times in the press that the Devin Townsend Project's double album from 2014, Z², was a not a fun record to make. It makes sense that he looked to his bandmates for support in figuring out the whole 'What do we do now?' issue to create a stronger album.

"The Z² thing was such a blur for me, man. I'd just finished Casualties Of Cool, I didn't really want to be recording, and I think the things that I grasped onto as inspiration at that point were more to do with death, which doesn't really bode well for an entertainment piece in the first place. Transcendence is much more user friendly. I struggle with the desire to always kind of sabotage things, and that's something I'm certainly more aware of now than I used to be. The benefits of continuing on a certain path musically are obvious; you can get momentum, get an audience, all these things, but my patience is so limited. Had my financial situation been different 15 years ago I'd probably be doing something completely different from what I'm doing now. With that in mind, the fact that Transcendence turned out really well is great and I thank the guys for their involvement with that."

Transcendence leans in a progressive direction, mixing it up between compact to-the-point songs and longer intricate tracks, recalling the vibe and atmosphere of Townsend's critically acclaimed Ocean Machine record from 1997. The nice thing about DTP prog is that he - or rather, they - are able to churn out an 9+ minute crusher and still remember how to write shorter songs with an equal amount of thought and intensity, something many "real" prog metal bands - those schooled in Dream Theater 101 - have a hard time doing.

"I appreciate that. I think a lot of that with this record is that I had written so many songs and presented them to the guys as opposed to typically saying 'Okay here are 12 songs and this is how they go...' Within the parameters of how it got massaged together, the fact there are some of these longer progressive bits is more of an indicator of the personalities of the people involved rather than a conscious decision. There's enough shrapnel in those songs that we could have done a record of three minute songs or a record of eight minute songs. It seems like the ones that gelled best with everybody were a decent cross-section between the two." 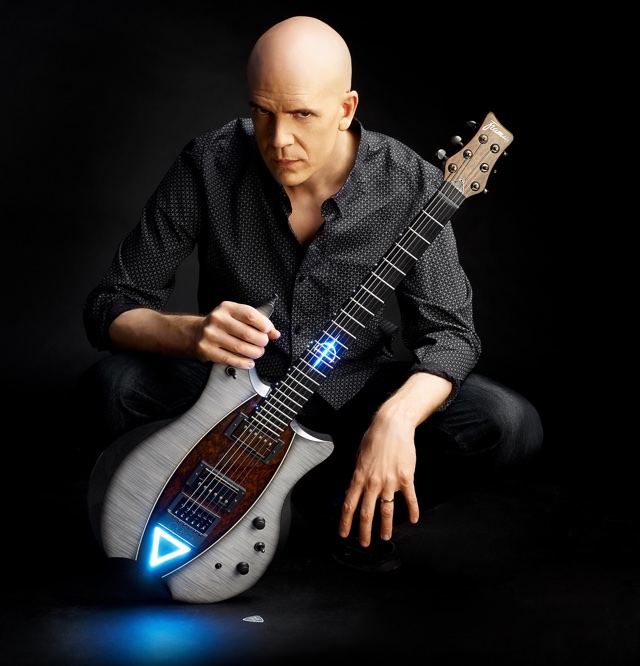 In keeping what seems to have become a tradition, Transcendence finds DTP covering - better said, updating - some of Townsend's older work, namely the song "Truth" which originally appeared on his 1998 solo album, Infinity. Previously, "Hyperdrive" from Ziltoid The Omniscient (2007) was resurrected on Addicted (2009), and "Kingdom" from Physicist (2000) was updated on Epicloud (2012). Diehard fans that have been paying attention will note that the Physicist tune "Victim" was also pimped for Transcendence, appearing on the 11 track bonus disc.

"I don't know why I do that," Townsend muses. "I think it's probably and practically between intentional and accidental. My work in general is underlined by the fact I believe I'm an obsessive perfectionist that has never gotten anything perfect and never will. There's an underlying stream of irritation that goes with everything I do, so when I look back at what I've worked on, especially something that is of value to me, it always pisses me off because it wasn't done correctly or it doesn't sound right. I have no problems with trying it again. Hopefully the theme of whatever album I'm working with will be able to incorporate that emotional component in ways that it doesn't seem cloying."

"The thing with 'Truth' is... the intention of that song and the whole Infinity era was kind of skewed for me. I came out of it almost immediately thinking 'I didn't get that one right.' I guess there's even an irony to the title, 'Truth', because it was a deluded truth in a way (laughs). Because I like the songs and I personally didn't think I hit the mark, and because Transcendence was rooted in discipline and compromise which is very separate from Infinity, it seemed appropriate to do the song again." 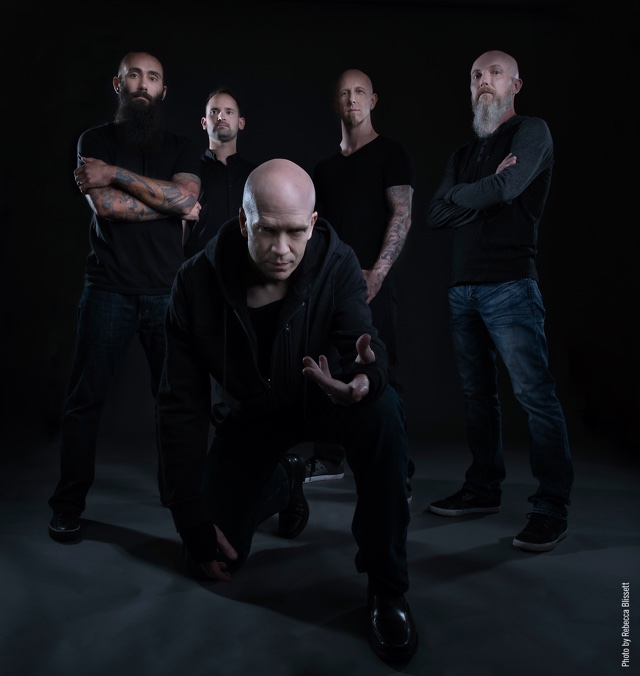 Then there's the choice to cover of Ween's "Transdermal Celebration" that closes Transcendence, a song that sounds like it was written by DTP specifically for the album.

"We didn't do the cover for a lack of original music; it just seemed like it would be fun and be a way to underline everybody's participation on Transcendence. Plus, I like the idea that it's the last song on the record because it's another anology for letting things go."

For Townsend, the "letting go" aspect of making Transcendence was a very big deal, and one the ultimately paid off where the vast majority of fans  and he himself are concerned.

"There are a lot of things in my creative arsenal, and each one of them is vying to come out. In the past I've recognized that through making records there are certain techniques I should avoid based on how it resonates with the rest of my life. If there's anything I miss from that sort of unhinged part of my personality is the lack of parameters. I'm looking forward to letting things go a little bit more on this symphony thing I'm working on. Regardless of whether it'll be a visceral heavy metal thing, which it won't, there's a spirit to that sort of freedom that I look forward to exploring again in some ways."

"As a bandleader, boss, husband, father, friend, being up to do interviews at 9:00am (laughs), all of these things require a lot of discipline. Exercising every day, not drinking, not smoking, it works for me. I'm very compartmentalized in the ways that I work now and it's been very efficient, but there's also a part of me that wants to be free. I think it's taken the DTP experience and the Transcendence record in particular to recognize the ways in which I can do that and not have it be really destructive for me."

Townsend agrees you could call Transcendence art on a leash...

"I certainly credit the guys in the band, management, the label, the artists and everybody who was involved to try and rein it in a touch. I think that's why Transcendence is a challenging album for me to appreciate because there's a feeling of... embarrassment with it. It's like 'Okay, Dev there are all these things that come naturally to you and we're going to pull back on the reins to make things a bit more palatable.' And I'm saying 'Yeah, but I wanna do a symphony rooted in sex and violence and I want it have this metaphor and....' Then they say 'Or, we do a cool 10 song record and a cool cover, then you can go play...' (laughs). I spent a lot of energy really trying to participate without feeling like I was being condescending. As opposed to 'Okay, we'll do it your way' we really had to work together and it was challenging for me. As a result of this project and doing it for six months, I constantly felt that I needed to change. On this record I was very rarely able to say 'Hey, this is your fault!' because everybody was being so careful with me and so kind, allowing me to do what I want."

"It was a conscious decision to open this up a bit, but it was something that was separate from the music in a lot of ways. The music is cool, but it's what went into the music that's important to me and I hope that in the future I'll have an opportunity to step out in ways that are more in line with that lack of desire to be reined in. Maybe I've learned a few lessons from this, though As I listen through the record I think it's really good. I'm connected to it in some ways and disconnected in others, but I think it's a good step."