EAGLES OF DEATH METAL's JESSE HUGHES - "These Questions That You're Asking Me ... In One Move, You're Sinking My Battleship" 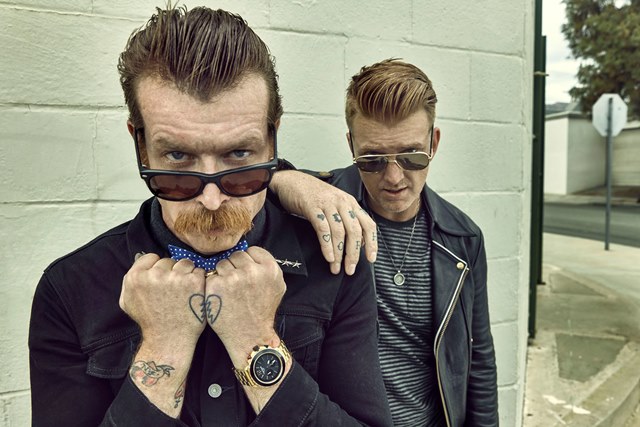 You can always count on Eagles Of Death Metal for a rockin' good time. And the duo - singer/guitarist Jesse Hughes and drummer Josh Homme (yep, the same Josh Homme from Queens Of The Stone Age and Kyuss fame) are back with their fourth full-length overall, Zipper Down. Always a fun chap to chat with (I should know, as I've had the pleasure of interviewing Mr. Hughes quite a few times over the years), the man with the ever-present mustache discussed the new disc, as well as the possibility of penning tunes for pop acts, and of course, his old pal, Axl Rose.

BraveWords: What is sexier - the songs on Zipper Down or the album cover?

Jesse Hughes: "Well, that album cover's pretty sexy. And I have to say, I've always wanted to be a human nipple - I just never knew how good I would be at it. So it's sort of the reassuring things that come from an album cover like this. Zipper Down is probably technically the least sexy, simply because it's an old desert phrase that means like, when someone's getting too excited or too drunk or too loud, you'll hear someone say, 'Come on bro…zipper down.' It's almost like a 'keep it together' modified, to sort of insinuate that it's better when titties hang out, I guess."

BraveWords: How did the idea come to remake a few tunes off your solo album [2011's Honkey Kong]?

Jesse Hughes: "I was just looking at every punk rock album ever released in the '80s, and noticed that they just kept releasing the same songs. And then I remembered that Modern English had a hit with 'Melt With You' 25 years apart [it was actually 1982 and 1990], and I was like, 'Great idea!' It makes the songwriting process a whole lot simpler. Actually, when I released the Boots Electric solo album, Joshua has always been one of my biggest supporters, he particularly loved the three songs that we chose to put on the Eagles Of Death Metal album. He gets jealous, like any friend in a relationship - somebody else was producing me [Money Mark], and it was one of my heroes, and I know it particularly irked him a little bit, even though he would have never admitted it. So I feel like the true reason is that he felt like those songs should have been Eagles songs and it should have been done a little differently. Dude, covering myself with a vanity level like I have? Covering myself is not a problem."

Jesse Hughes: "I love 'Skin Tight Boogie' because I love the way Tuesday's voice sounds when she does her little 'Blondie rap.' I love 'The Deuce' because it's probably one of my best guitar solos and that's also one of the first Eagles songs I got to produce. Like, I was at the controls, producing everything. I love the 'Save A Prayer' cover [a Duran Duran tune], because I love that song, and not much more reason than that. And I also love 'Skin Tight Boogie,' because I think it has some of Joshua's best guitar playing, because he does a couple of the solos with me, which was awesome. And I have a great, almost like, spiteful pleasure in the fact that his best guitar performances aren't even on his own records!" 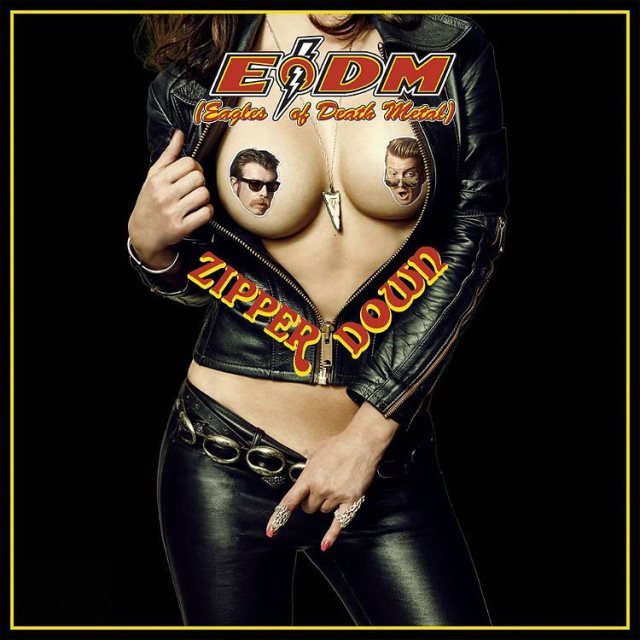 BraveWords: You don't seem to get the credit for helping bring back the popularity of the mustache in rock n' roll. You were rocking a 'stache back in '04.

Jesse Hughes: "Thank you, man. It's a quiet realization that I've made, because I can't really say it out loud. I wasn't trying to bring back the mustache, I was really just trying to get laid, and I figured that if I looked like every of-age girl's dad when they were about four, I would have a Freudian advantage that could not be fucked with."

BraveWords: You'll be happy to know that as of this moment, I am sporting a mustache, too!

Jesse Hughes: "Awesome, dude! And when you sport it seriously, not like an ironic mustache, but when it's a serious mustache, I don't give a fuck what anyone says, you feel tougher and your dick even looks a little bit bigger. There's something about the way the proportion of the hair on the face literally confounds the human body and makes the dick look bigger. It's a fluke of science. Nobody can really explain it - but it is a fact."

BraveWords: Who would you say are some of the greatest mustaches in rock n' roll history?

Jesse Hughes: "Doc Holliday and Wyatt Earp, because I don't give a fuck if they didn’t play guitars, they played the other kind of instrument - that kills assholes - and they were rock n' rollers, for sure. Um, let me see, the Three Dog Night dudes, their mustaches were epic. Tom Selleck, of course, being the biggest selling male calendar and poster image of all-time, he's like the male version of Farrah Fawcett. And you know who else has a great mustache? My actual literal direct inspiration for my mustache was in Boogie Nights, and it's the character…he's the dude who gets shot and tries to rob the safe [the character Todd Parker, played by actor Thomas Jane]. He's the only actor in that movie that actually grew out his own mustache. Everyone else had a fake mustache or a hairpiece, and the second he walks on the screen, you're immediately like, 'Whoa!' And I was able to see the real power of a real mustache."

BraveWords: 'Cherry Cola' is one of my favorite rock tunes of recent times.

Jesse Hughes: "Well, I wrote that about a truly special person in my life. She owns a bar in Toronto, Canada, called Cherry Cola - named after the song, because her name is Cherish. And I won't say who exactly it was, but I knew that the hero of mine from whom I was stealing the song had written a special song, so I felt I had better than less odds of getting something special out of it. But those songs, those are what I call my 'top tier songs' - that's one of my best songs. And those are the songs that I wasn't trying to write, which is kind of what makes it very frustrating, that part of the writing process. The most incredible song I am able to write is the one I wasn't trying, and really was so inconsiderate of the reality as I was writing it…you know what I'm saying? 'Cherry Cola,' that's just a crude expression of a sensation I was feeling. And if you haven't noticed, it is a single theme repeated."

BraveWords: I think you would work well as a songwriter for pop acts, since many EoDM songs are so simple and catchy. Would you ever collaborate with say…Britney Spears, if the opportunity ever came up?

Jesse Hughes: "You know, Greg, I'm not blowing smoke up your ass - you and I have a long-term relationship. You were one of the first people that ever seriously interviewed me - I don't drink, so I remember my life. And the things that are important in my life are valuable to me, so you and I have a relationship, and I want to you tell you, these questions that you're asking me right now, it's like we're playing Battleship, and in one move, you're sinking my Battleship - but not in a bad way, you know what I'm saying? I love songwriting, and I would love to do that. And that would fit right in my whole concept of everything, because that's the kind of shit that artists that take themselves 'seriously' aren't supposed to do. Like, if you're going to take the big check for selling your songs to a commercial, you're not supposed to smile while you receive it. I don't follow that. I think that selling out is simply making the record you're told to make, and everything else is a profit off of an honest business. That's how I look at shit. Britney Spears, man, I'll tell you what, I think she is one of the fuckin' finest pop artists we've ever had. And it would be an honor to get to write for her. But the girl that I really want to write for is Kesha. That's where I think that I could start. Because maybe the worlds won't mix - have you ever seen the video for 'Rock Me Amadeus' by Falco? It's Hells Angels and Mozart people! It's a hilarious convergence of extreme worlds."

Jesse Hughes: "You know what man, every year, since Axl Rose fired us from the tour [in 2006], I have sent him a very sincere request - around Christmas time - inviting him to come in the studio and record two Christmas songs, and be released as 'The Pigeons Of Shit Metal.' And I always close it with a very judgmental, 'Because I want you to know Axl, I'm willing to forgive you, and I feel like the rest of the world is, too.' So I think that final statement he probably doesn't appreciate too much, but Axl Rose unfairly - and incorrectly - is identified as 'Guns N' Roses.' And I take umbrage to that. To me, Guns N' Roses is Duff McKagan, Izzy fuckin' Stradlin, Slash, and Steve Adler, and then Axl. When Axl was alone in the band, it was just 'G n' R.' The 'uns' and the 'oses' became Velvet Revolver. And we just played a show in England, and Duff was there. It was fuckin' awesome. I think if Guns N' Roses really wants to play again, then Axl should grow the fuck up, and let THE Guns N' Roses play. And that ain't gonna happen unless it's the actual members. Unless you want to turn Guns N' Roses into a band like Menudo, or if it's trying to turn it into Ringling Bros. and Barnum & Bailey Circus. I mean, the Ringling brothers are dead, but you can still go to their circus, I guess."