EDGE OF PARADISE – “Alive Is A Whole New World, Another Planet” 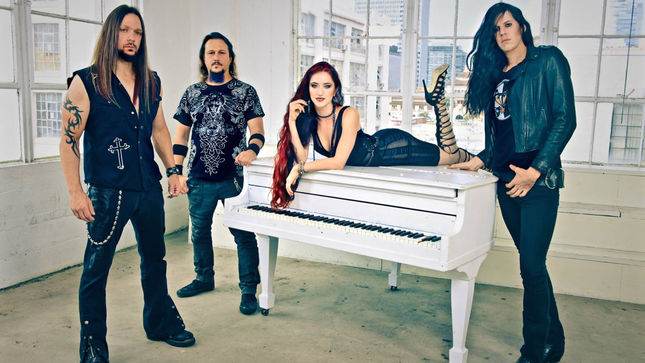 “They’re very hard songs to sing. Sometimes I’m thinking, what the hell was I thinking? Why am I putting myself through this? But I really love these songs, and I really love singing live,” says Edge Of Paradise vocalist Margarita Monet, talking about her band’s brand new EP titled Alive.

Alive is the third release from California based industrial metal outfit Edge Of Paradise. After releasing two previous full-length albums: Mask (2011) and Immortal Waltz (2015), Margarita, along with her bandmates Dave Bates (guitar), John Chominsky (drums), and Nick Ericson (bass) opted to record a five-song EP as opposed to another full-length album for reasons which she explains. “Honestly, it’s due to budgeting because we pay for everything ourselves. We didn’t want to wait too long to release another album, we wanted to keep the momentum going. Also, we want to make sure every single song is as great as possible production-wise to compete with the bigger bands out there. And all these songs (on Alive) have a common theme to them; it felt like a good package to present to the world.”

Does Alive fall under the category of concept record? “Maybe… it has a message to it. Every song deals with a different issue, but they all explore the modern day way of living and how we get so caught up in it that we forget we’re actually alive; our humanity and that sort of stuff.” It seems that everybody is glued to their screen these days – be it their phone, tablet, or computer – that’s all they’re concerned about and sadly, everything happening around them in the real world is missed. “Even at concerts, people watch it through their phone,” laments Margarita. “Being in a band, I have to be on my phone all the time because everything is through the Internet nowadays. But I’m not a person who would take selfies every other minute – I hate that.”

The aforementioned desire for top-notch production led Edge Of Paradise to assemble an all-star team to work on Alive: producer Chuck Johnson (Korn, Slipknot) was joined by Jay Ruston (Anthrax, Steel Panther), Mike Plotnikoff (Buckcherry, Fear Factory), and Michael Wagener (Metallica, Alice Cooper) on the mix. The question beckons, why enlist three different mixers for five songs? “Michael Wagener is part of the team; he produced our last CD Immortal Waltz, and we wanted to have him on this as well. ‘Mystery’ is a ballad and Michael’s the king of ballads; it was awesome that he could mix that for us. We started working with Jay Ruston, but he was working with Stone Sour and we had a deadline, so we were introduced to Mike Plotnikoff – he’s amazing, and he’s ten minutes away from us; that worked out really well. ‘Dust To Dust’ and ‘Humanoid’, the songs that he mixed, he really put his stamp on it and elevated them to a new level. We didn’t plan this but everything fell into place and we couldn’t be happier with it.” 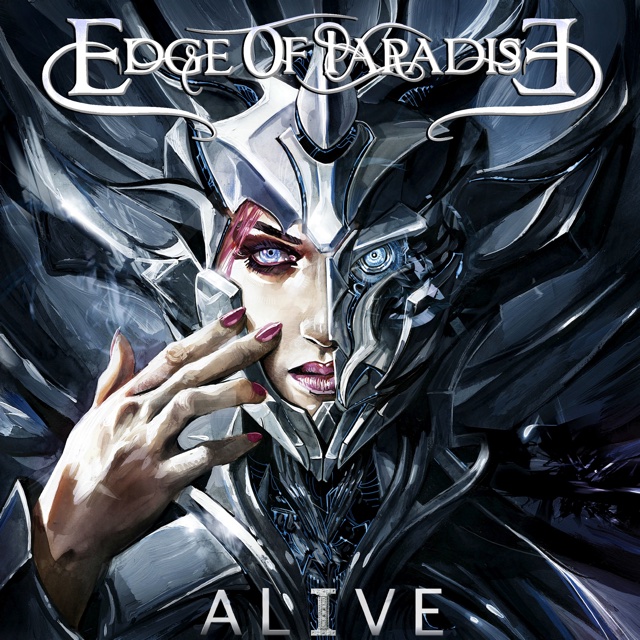 “Mystery” really sticks out because of the piano part, and the fact that it’s a ballad when the other four songs on Alive are heavier in nature. “I’ve played piano my whole life so I wanted to incorporate that,” admits Margarita. “I play keyboards on all the songs. I like to play around with sounds and now the music is more industrial, I feel really comfortable playing this sort of stuff. I was happy we had a song I could do that on.” When it comes to the live setting, will the piano and keyboards be tracks that are played from the soundboard? “If the stage is big enough I’ll probably play it live, and then throughout the song we’ll have the track come in. I sometimes will incorporate the keyboard live; I’m not stuck behind it, sometimes I play during the guitar solos. But as we move along, I think we might actually get a keyboard player.”

Returning to the studio, Margarita recalls laying down the music that came to be the Alive EP. “We recorded ‘Shade Of Crazy’ probably six months ago, but we didn’t get the distribution deal (with ILS / Universal) until four months ago; that accelerated the process because we had to get it done. We had the songs written, but recording them is another thing because our songs are very layered. It takes us about a month to record a song and make it really good. We had to rush this a little bit so all in all, it took us about six months to finish everything – with a little break in the middle cause we went on tour. We went to different studios; we recorded at Clear Lakes, we also recorded at Terence’s Studio out in Thousand Oaks – wherever we could get into we went. We have a little studio at home where we demo everything… it’s a pain in the ass when you go to different studios. It’s such a headache to edit the files and make sure everything is in the right place. I wish we could just go to one place and do the whole record there. Being a new band, you have to deal with all this stuff; but I learned my Pro Tools.” Speaking of “Shade Of Crazy”, one just has to ask, what shade of crazy are you? “Oh god! Many shades of crazy… to be doing this, you have to be crazy right. I’m actually pretty normal, but everyone has their different sides. I show my crazy side on stage – there you go.”

Thus far two videos have been filmed to promote Alive, both of which can be seen below. One for “Shade Of Crazy” and one for the title track. Margarita enjoyed those experiences, yet describes them as “a pain in the ass, honestly. We had to do everything ourselves – build our sets, make our costumes – but it was cool to be in control of it. We had a lot of fun doing it, but it’s so much work making videos. I hope that we’re going to make more for these songs cause we could come up with some cool concepts.” 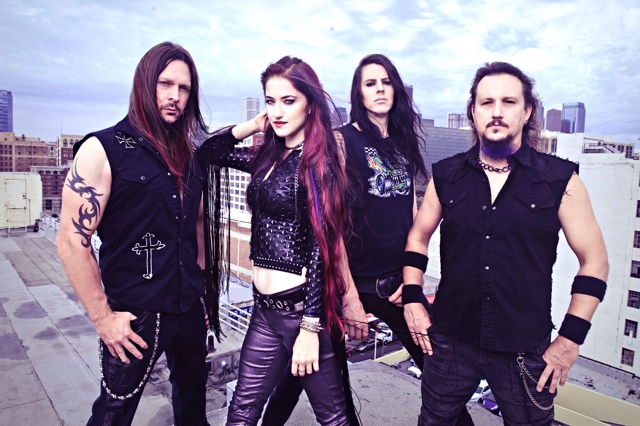 The artwork that adorns Alive, pictured above and created by Timo Wuerz, is rather striking. “He made it just for us, he’s amazing! Timo did the cover for our last CD Immortal Waltz, he was introduced to us by our previous label Pure Steel in Germany. When it came time for this CD, he had to do it. I didn’t want to tell him exactly what I wanted. We just told him kind of what the music is about and let him come up with it, because it’s always good to have someone else’s perspective. He sent us a bunch of different sketches and we went with this painting.”

In closing, Margarita looks both back and forward. Compared to the previous Edge Of Paradise albums Mask and Immortal Waltz, Alive “is a whole new world, another planet. It’s another level for us. It’s a natural evolution. Mask sounds like a different band because I didn’t write any of the songs. I consider Immortal Waltz our debut CD. And Alive really showcases the potential of the band. We’ve grown as musicians and as people; I’m a more mature vocalist and songwriter now. As a singer you never stop evolving.”

For the future, “the goal is to tour as much as we can and keep recording music.” Margarita’s dream tour package would include “Rammstein, Korn, and Rob Zombie; those bands with us right in the middle.” Those acts have pretty elaborate stage shows, something Edge Of Paradise aspires to, assuming the budget allows. “Yes, we have an elaborate show – as much as we can. The bigger the budget, the bigger the show; trust me. That’s one thing I really love about rock shows is how visual you can make them. Our music is kind of theatrical so I want to have the visuals to back it up. We already do to a certain extent, I just want it to keep evolving into a bigger, more stunning visual. We want to make the show an experience for people and draw them into our world.”