For non-German-speaking Rammstein fans that have wondered what frontman Till Lindemann has been singing about for the past 20 years, the Lindemann debut Skills In Pills will answer that question. May whatever deity you bow down to save your soul if you're a prude.

It's actually not as bad as all that provided your sense of humour is plugged in along with your earbuds. If you enter Skills In Pills expecting emotional depth and moral introspection you're most certainly in the wrong place. There are a couple such moments, but you need to weed them out amongst done-for-fun tracks like "Praise Abort", "Ladyboy", "Golden Shower", "Fish On", "Skills In Pills" and "Fat" (which spawned the title of this story). Settling in to discuss the new record with Till Lindemann and Pain / Hypocrisy frontman Peter Tägtgren, it becomes clear within the first 30 seconds that the duo had a riot putting it together. The share a mutual respect as musicians and friends, and their chemistry is that of two high school punks up to no good and looking forward to the repercussions.

To be clear, Lindemann is not a solo project. Peter Tägtgren is an equal partner, but most folks outside Scandinavia can't pronounce his surname so the duo went with the next obvious choice.

BraveWords: For those that haven't heard the Lindemann material yet, your sound is a mix between Rammstein and Pain, which should come as a surprise to exactly nobody.

Peter: "Oh yeah, it's definitely a mix of the two."

Till: "Call it PainStein-ish (laughs)."

Peter: "You'll always hear Rammstein in there because of Til's voice, and the keyboards and chugging guitars are definitely me. But, it was put together in a different way and I did things that I've never done before on this album. There are two ballads on the album, for example. At the beginning Till was talking about doing one and I was like, 'No, I don't want to do a fucking ballad...' but somehow he convinced me (laughs). We were writing a piece and it turned into something else, so what we accomplished as the final result turned out to be very fresh." 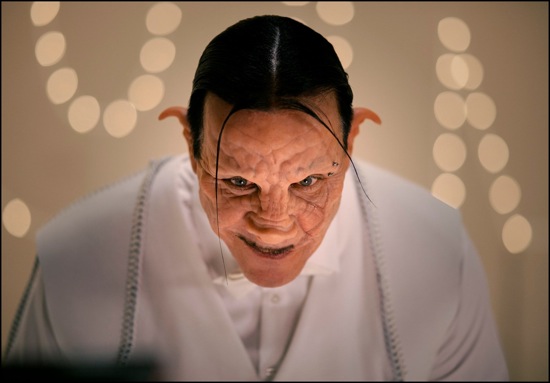 BraveWords: How did the two of you hook up for this project? It's not a strange pairing given the similarities between Pain and Rammstein's sound, but it seems unlikely given that the bands travel in different circles in terms of popularity and exposure.

Peter: "We've known each other for 13 years. Rammstein was in Sweden mixing their Mutter album (2001) and they were hanging out a lot at bars in Stockholm. I was there with Pain and we always ran into each other one way or another. At some point we ended up drunk as fuck together one night and said 'We should do something...'"

Peter: "Yeah, but it took 13 years to find the time to do it. Til invited me down for one of the final shows on the last Rammstein tour in Sweden, I took my family with me, and he mentioned the band were going to be taking a break, so now would be a good time to do one or two songs and just put them out on the internet, just to see what people think."

Till: "It wasn't planned. I promised Peter that I'd jam with him for Pain, maybe do one song or some choruses on an album, so we decided to do one song together. It was a lot of fun, it came out great, we decided to do another song, and at that point we'd tasted blood so it was on. It made sense to try and make a full album."

BraveWords: Is it fair to say that the record was outside the comfort zone for both of you, which is what made it fun? The obvious difference is Till singing English instead of German, which is odd if you're a Rammstein fan.

Till: "Definitely. With this project I was involved in sone of the production of the songs, I did some arranging as well. With Rammstein I'm usually too busy writing lyrics for the music the other guys come up with. In that case I'm also working with five other people so I have to consider their moods, their feelings on certain things, which is different from this. And for Peter, this was the first time he had someone in his studio that opened his mouth and said to him 'Maybe you can change this...', which was a bit strange for him because he's used to working by himself. So, it was a very different situation for both of us."

Peter: "Yeah, but I learned a lot from working with Till because I brought ideas to the table and we'd work on them together. I think that experience helped to make me a better songwriter and producer." 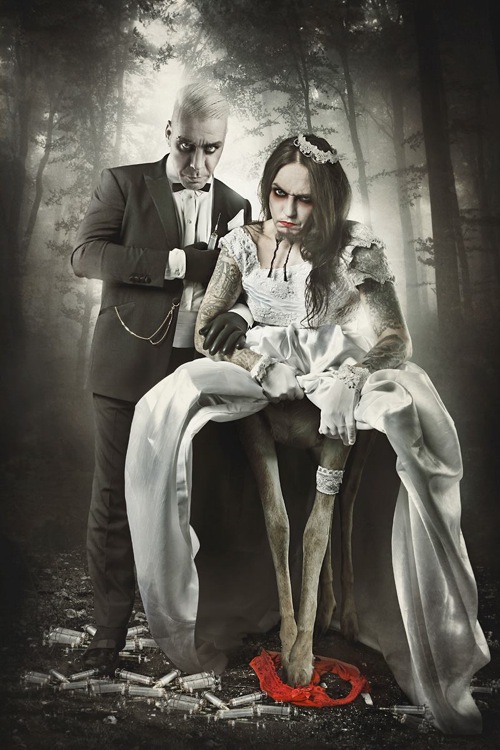 BraveWords: Is the new album all brand new material, or did you defrost any respective leftovers from previous Pain or Rammstein sessions?

Peter: "It's all brand new, and we didn't think about releasing it so there was no pressure. You go with the flow, which is why the shit on the record is super honest."

BraveWords: Being able to speak English - or any language for that matter - doesn't mean you'll be able to write at the same level as you do in your mother tongue. People who understand your Rammstein lyrics may be surprised at how well you execute your thoughts on the Lindemann record, both written and vocally. Was it difficult composing in English?

Till: "It came easy at the beginning, up to the point where we decided this was going to be a serious project. As soon as it was decided we were going to release something I got really nervous because it meant the song would be published, and you have to be good at what you're doing if that's going to happen. I was excited but I was also afraid of turning myself into a fool with the lyrics."

BraveWords: But you kept the same focus and attitude that fuels Rammstein's lyrics and your poetry books.

Til: "Of course. If you're writing lyrics it comes from your heart and soul, and that's not going to change just because of the language. The topics and themes are similar to Rammstein, but somehow it's not as brutal and there's more humour in it. I think that's because of the songs being in English. I think some people who know my writing will be surprised. There's one song on the record called 'Yukon', for example, that I wrote about canoeing in Canada and crossing the border into Alaska. It was a very inspirational journey, so since you're Canadian you might like it."

BraveWords: Peter, you played all the instruments but did you bring anyone else to back-up or strengthen your performances, maybe make the songs fatter?

Till: "Yeah, yeah, the big show-off. He wanted to do it all by himself (laughs)." 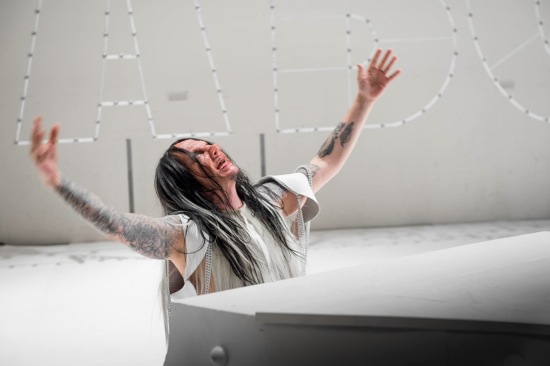 Peter (laughs): "I live in a such a remote place in Sweden, I might as well do it myself, but with the orchestral stuff I actually called up Clemens Wijers from Carach Angren because I mixed their album and I was so impressed by the orchestra stuff he did. I asked him where he recorded it and he said, 'Oh, I did it myself at home.' Normally he does music for movies, so I asked him if he could pimp up my orchestra stuff for Lindemann (on 'That's My Heart') and he totally fucking did it."

BraveWords: No singing or screaming from you? It sounds like you edged your way onto the end of "Fish On".

Till: "He was screaming all the time at me (laughs)."

Peter: "Yeah. 'Do it right for once, you idiot!' (laughs). That was the only screaming I was doing. I did all the instruments and he did all the vocals. That was it."

BraveWords: Any chance of touring for the album? Doing so makes for an interesting scenario since Till has been playing huge arena stages for years. There's a Rammstein contingent that would lose their minds at the thought of seeing him in an intimate setting.

Peter: "That's a tough question. It depends; if people hate it we'll stay home (laughs). We'll lock ourselves away for a year. We have to wait and see what the reactions are before we can make a decision like that. We can do this stuff live, no doubt about it, but that's up to the fans."

BraveWords: Future plans for Rammstein, Pain or Hypocrisy? Is there anything on the table or is Lindemann the priority for the near future?

Till: "I meet up with my Rammstein colleagues in September for pre-production for the next Rammstein record, and Peter is going back to his shit-hole up north with Pain (laughs)."

Til: "Make sure you put that as the headline for this story. I offered him a piece of mine but he wouldn't take it." 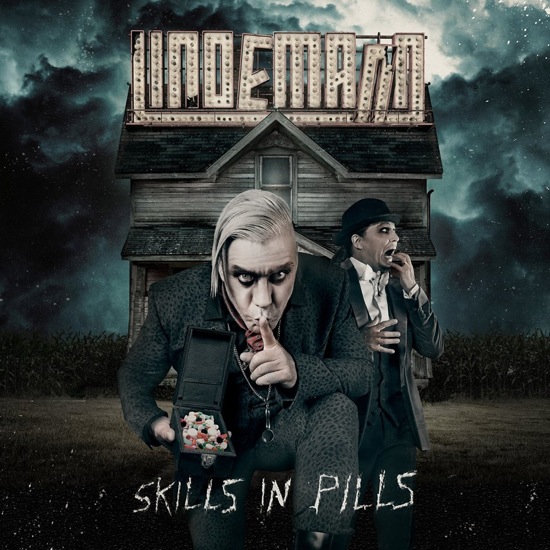