MEGADETH’s DAVE MUSTAINE - “Would I Want To Do A Hologram For Gar And Nick? Yeah, Absolutely”

There’s a been plenty of water under the bridge since Dave Mustaine and I had an awakening of sorts. BW&BK Magazine had called him out on the travesty, The World Needs A Hero, and he actually reached out to me after the fact and said that we were bang on with our critique. A tough pill to swallow no doubt. So there’s been a long, mutual admiration between the two parties, despite whatever people think about him. And c’mon, let’s call it as it is. The outspoken Mustaine has had his controversial moments, but he’s a very smart man, and whatever comes out of his mega-mouth usually has a bit of thought put into it.

So prior to his coffee fix, we caught up briefly at Germany's Summer Breeze, to chat about the European festival scene and how Megadeth fits in the mix, the ongoing revolving door with band members and of course he addresses the topic of new material, post the success of Dystopia. 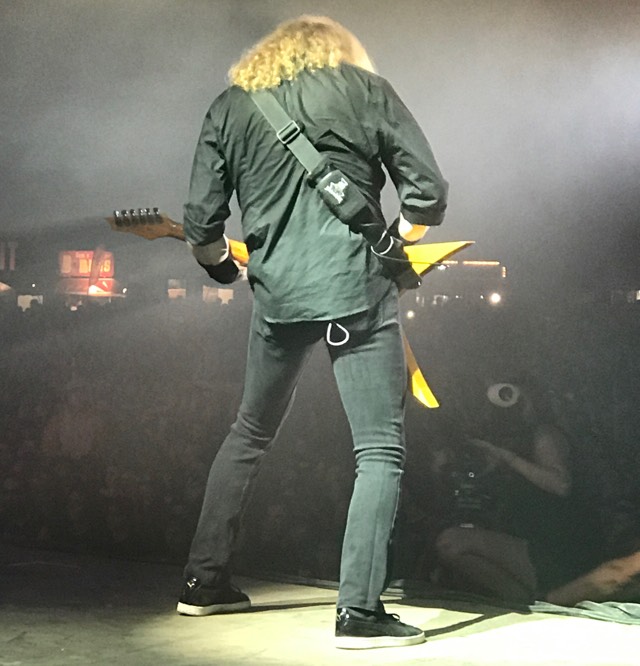 BraveWords: What kind of game do you bring to the European fests that’s different than North American arenas?

Mustaine: “Well, you know there are much different lineups, different mentality. I hate saying this, but it’s a more festive atmosphere. Those words are very important to European promoters - it needs to be festive. And I think when you go to festivals over in the States, it’s more corporate. A lot of it is done on pavement, you don’t have a lot of camping, barbecuing, non-stop partying where you are just hanging out with your mates and stuff. But that’s where the part of the entertainer comes in. Like when you do your editors job or do your writing, you have to approach your task from different angles. Do you flank the enemy, do you take them head on. So as an entertainer, you have to know which audience you are playing. One that sees 300 bands a year, or one that sees one band every three hundred years! So I think that’s one of the coolest things for me, at this stage now, is seeing all these places again, and learning how to address it a little bit differently. Just getting seasoned in that area. Cuz I look at Bruce (Dickinson) and some of the other guys that I look up to and there is a lot of things they do that I admire. A lot of stuff that if I did it, I would do a bad job of it. There is just a lot of ways that they interact with their fans. That’s really neat, coming into different venues and seeing that.”

BraveWords: But somebody like Bruce walks into a situation with a sense of humour. He’s living life. Just meeting people where they are at.

Mustaine: “He’s a different bloke. You look at his job, his band, his success. There are a lot people that get that successful and they don’t handle it that well. A lot of people that we’ve lost recently. Sometimes it’s accidental, sometimes it’s purposeful. Still it hurts when you lose them. There’s a lot of really talented people. I just saw Viv (Vivian Campbell) in Italy and I was talking to him about Jimmy (Bain) dying. When we went out with Dio, Jimmy, David (Ellefson) and I hung out all the time. So, all of a sudden when you hear about somebody dying, it’s like ‘shit’.”

BraveWords: Here’s a loaded question. What do you think about the Dio hologram concept.

Mustaine: “I really don’t know anything about it. Some purists would say something terrible about it. But I think that as a widow, Wendy (Dio) has the right to do what she wants and we should support her during her mourning. If this is the way she gets through it and if it helps her healing, more power to her. I would love to see Ronnie again myself. Would I want to do a hologram for (deceased Mega-drummers) Gar (Samuelson) and Nick (Menza)? Yeah, absolutely. But would I take it on a tour, I don’t think so. I’m so happy right now with our line-up and from where I sit, the public is accepting this line-up now a lot. In the beginning they didn’t want Kiko (Loureiro) and Dirk (Verbeuren) in the band, because they wanted Nick (Menza) and Marty (Friedman). And that failed. I tried, I tried so fucking hard. Talk to Ellefson about it, because I’m talked out of it. Nobody believes me anyway. It’s sad Tim, I’m pouring my heart out to you. And David will tell you the same thing. And it will be the truth. He’ll say ‘Mustaine was right,’ but it’s me and half the stuff I say people go (makes a non-believing gesture). But no, I’d love to do a hologram of Gar and Nick. I miss those guys. We were friends and we were really close. And whenever bands break up, there is always three sides. There is their side, my side and the truth. You know, when we parted ways with Gar, it was just stuff was going wrong. David and I hooked up with those guys and picked up some really bad habits. And bad shit was happening. So in the matter of self-perseverance, we needed to do what we needed to do.” 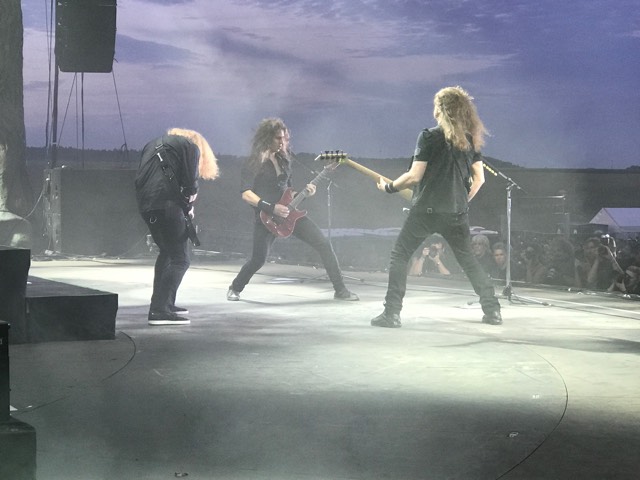 BraveWords: You are lucky you got out alive.

Mustaine: “Yeah, because if you remember that period, everything was going down. Nikki (Sixx) had his incident and there was so much coke and heroin going around at the time. So many people were in that scene that so many people don’t know about. I’m not going to finger anybody. It’s kind of like a no-brainer that I was in on it. Whenever there was trouble, we were usually there.”

BraveWords: You were leading it!

BraveWords: So rumour has it the creative juices are flowing?

Mustaine: “I think so. I think that Kiko’s been waiting to play and put his fingerprint on Megadeth music. Dirk wants to take part as well. When Chris (Adler) came in, we wanted him to be permanent. Literally, because he had said that Lamb Of God would be taking a vacation and we could work with him for a while. And then we were making it happen so that it was possible for him to do both. But then Dirk came into the picture and Chris said this is the guy. ‘You're going to want him after you start playing with him. I know that I'm getting myself fired right now.’ (We both laugh). Chris and I have stayed really close. I love him, I think he's a really amazing talent and really fun to be with. And I thought it was a really loving gift from him to say ‘this is the guy that I think you need.’ Because when we were writing the record - and I don't think I've told you this yet - there are a couple of songs that I was working on when I was living in California. ‘Dystopia’ was one of them. We had gone into the studio in Nashville with Chris he kept saying ‘that's my Megadeth’. So what really made me happy was that the stuff on Dystopia was the stuff that I really enjoyed playing. I remember playing the drums on Ellefson’s leg! So totally felt different than anything that we've done in a really long time. Especially the last three records because there was a sadness, because Chris and Shawn wanted to do more stuff. For them it wasn't happening, for us it wasn't happening. The management was wrong, a few things were wrong. I do wish those guys the best. I truly have some great feelings for Shawn and I hope he has success. We had so many great moments together, so I wish him the absolute best. Things change, they change for a reason. That’s why we never really know how long somebody is going to be in our lives. It's good to not go around sticking your finger in everybody’s eye. I learned that a while ago, although the reputation continued (laughs), I stopped doing it. I was looking at the band list today and I saw Life Of Agony and I thought ahhh, Joey Z. I love Joey Z. He used to babysit Justis when he was a kid. We’d go on tour and he would watch Justis. And he gave him a Life Of Agony skateboard that I was really touched. Stuff like that matters. There's so many plastic people in this business, when you see little things like that, people going out of their way, it matters. Dani from Cradle Of Filth, I got something for him for his daughter a long time ago, but I can't remember what it was. But we had talked someplace, and I was telling him how great it was to be a parent. I didn't really know who he was when I was talking to him, but we are friends now. Doesn't matter what he does or what I do, we are two dads.”

BraveWords: Or his religious beliefs.

Mustaine: “I really don't even know what anyone believes anymore, and I don't really care. It's none of my business.”