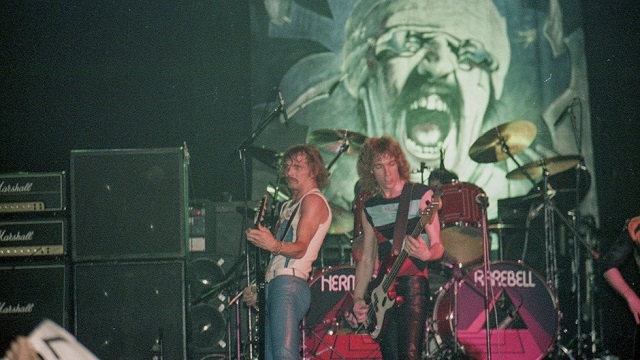 1988, metal was the biggest musical force on the planet. It was everywhere, although, in a post-PMRC notoriety era, it was with a sanitized, teen mall-rat, commercial/American veneer. Enter Monsters Of Rock, an all-day/night, multi-band festival, imported from the UK/Europe, where it had been a success, for years. Believe it or not, the inaugural US event saw Metallica go on second, ranked only above the opening act! An argument can be made that, apart from Kingdom Clone, none of these acts were supporting their strongest (let alone heavyweight!) albums: Van Hagar (OU812), Scorps (Savage Amusement), Dokken (Back For The Attack) and 'Tallica actually touring on the covers EP, prior to …And Justice For All, although the latter's album artwork was incorporated into the scrims and riser. However, afforded little room onstage, due to their low standing within the touring roster, the real stage antics (construction/destruction of Lady Liberty & failing lighting truss) were saved for the forthcoming headlining dates. They debuted "Harvester Of Sorrow" in a shortened set that also included (now requisite) numbers by Diamond Head and The Misfits.

In some cities, including Akron, the show played on consecutive dates. Given my predilection for supporting underground acts (something that remains unchanged, three decades later), outside Metallica (already diminishing, to my tastes) and the Scorpions (well past the Uli Jon Roth days, as well as their last great album, Blackout), attendance was more about the exclusivity of the day (summery/outdoor venue) than the actual performances. Remember being perturbed in Philly at such a large contingent beholden to the headliners (city has always been a hotbed for established acts, VH in particular, and lukewarm to fledgling metal talent), who clearly were inferior to the upstart, new breed thrashers. JFK stadium could house 100,000 or more, for concerts, although the old stone bowl (with bench seating) was nowhere near full, that sunny June day. 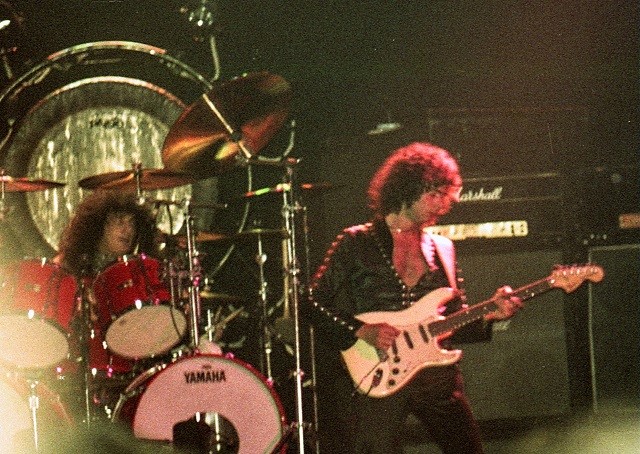 Left my high school graduation picnic to attend this show, my small Nikon EM camera outfit (a grad gift), 17th row floor seats and a fake press credential (purchased from the classified ads, in the back of some rock mag) in-tow. Figured a tele-photo lens and primo seats would be enough to garner some cool shots of the Scorps and the Man In Black. Unlike now, there was only a courtesy pat-down at the entrance, to make sure contraband (mostly bottles/weapons) were kept out. Anyone who attended shows in that era can attest to the visible layer of smog/haze/smoke that hung overhead, at the same level as the stadium's second tier, broken (only temporarily) by a soaring Frisbee (before it crashed to Earth, on some unsuspecting attendee). So some things did make it through!

At the door, security informed me that my camera/bag was not permissible. I calmly whipped out my fake press card, emblazoned with the name of the daily South Jersey newspaper. They NEVER covered the music I liked, so there was no way (in my naïve mind) that I'd be contradicted, when informing the guard, "I'm here to cover the show." He took me to the press office, where a woman took my camera equipment and told me to take a seat in the press box (literally overlooking the crowd) while she checked out my story, since it was "unusual" that press people (which I now know firsthand) wouldn't have "paid" tickets (nor seats w/ general public). Confined to the press box throughout the entire Riot set, w/ Rhett Forrester, on Restless Breed, I could look down on my high school buddy (vacated seats, even that close to stage, were plentiful, during the opening set), having been separated since entering, what with me being  taken away by security. In reality, the Germans were the reason we were there, this being (due to limited opportunity and my age) the first real chance to see them live. Didn't hurt that Blackout was a monster album! Had seen Rainbow with Graham Bonnet back in '79 (opening for Blue Oyster Cult). A huge BOC fan, went out and bought Down To Earth the next day, so the prospect of a poppy/commercial Straight Between The Eyes (with that sappy "Stone Cold" single that was even getting some FM radio airplay) had already soured me on where Rainbow was heading with their new singer Joe Lynn Turner.

So with the intermission between Riot and Scorpions now in session, I nervously approached the woman who seemed to be in charge and said, "My editor is really going to be upset if I don't get something for tomorrow." Seeing through my youthful charade, she nevertheless returned my camera and said, "Go ahead. Do me a favor, send me a photo, for the office." I tore down to the floor, reacquainting myself to my friend, who had NO idea what had happened to me (pre-cell phone/texting), yet intrigued by the short version of my tale before the show started. Although we stood throughout the Scorpions' set, there were rows of empty chairs between us and the relatively few fans who'd ceased tailgating had ventured into the air conditioning to check out a band that was still unknown to most. All the trademarks we'd read about in the UK press were on display that night: Klaus Meine jumping off the drum riser, Rudolf gripping his Flying V by the neck, as he spun it in circles overhead, Meine drumstick in one hand, hammering a cowbell in the other. Later he'd strap on a guitar as the four non-drummers stood side-by-side, playing stringed instruments. Since I was not in the photo pit, there was no one to stop my shooting, as I burned through three rolls of 36 exposures (film) during the course of their set.

The venue filled up for the headliner and the few shots I had left had to squeeze off while balancing atop the folding chair. Not the most stable platform for photography. Also had to dodge a sea of heads (everyone had plenty of hair!) and waving arms/skyward thrusting fists. Rainbow, with bassist Roger Glover (ex-Deep Purple, like his more famous guitarist/bandmate) proved the visual counterpoint to the Man In Black (to his left), in all white suit, complete with dress jacket and matching fedora. Periodically, the cantilevered pair of eyeballs, hovering over the musicians, scanned the crowd, spotlights shone from the iris. At other junctures, they would shine down on the stage, highlighting a particularly performer. Guess who got most of the "attention?" A couple of months later, Turner having updated his wardrobe from black on red t-shirt to white fringed leather and similarly colored tee, the San Antonio, TX stop (August 18) was filmed for what became the Live Between The Eyes home video (also shown repeatedly on MTV), which is widely available to watch online. Unlike that video, Blackmore typically kept to himself, stage left (and no one dare tread into his realm). Turner basically stood center stage and Glover rocked back and forth, when not traversing, stage right.

Long strange trip: See, I always wanted to report/photograph/cover/promote metal musicians, even if the methods weren’t 100% approved. It's a lot easier these days, in terms of access, platforms for coverage/publication and digital cameras mean no guesswork, can virtually guarantee you've got some useable images, even before leaving the pit.