SCORPIONS – “Not Only Can We Rock Really Hard, We Can Also Go Deep Down Into The Emotions” 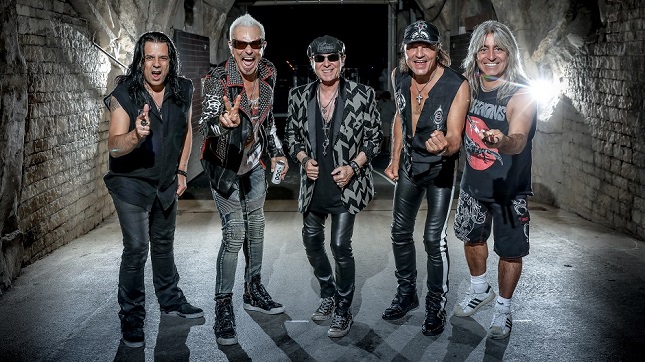 German axe-alchemists Scorpions are in a happy and heavy place these days, having just added tank of a drummer Mikkey Dee to the band’s ranks, giving the live show a shot in the arm that bodes well for the next record. But right now the guys are in pause mode, touring, yes, but also biding their time with a new compilation called Born to Touch Your Feelings: Best of Rock Ballads. Something old, something new, the album offers twists at every turn. Just when you get comfortable, here comes a new acoustic version, a Comeblack version, something from Eat The Heat or a radio edit or something from the Unplugged.

But most substantive are three new songs, of which “Melrose Avenue” is the most unexpected of architecture.

“Ha! Good question,” begins vocalist Klaus Meine, asked what it was like to pen a soft song with Matthias Jabs versus 50-year passport partner Rudolf Schenker. “I wrote a couple songs with Matthias over the years, but it’s always something special when Matthias presents a new song. And this time, when I heard this demo, it’s like yeah, this has got to be a California song. It’s a total California vibe, with the soft-top down, cruising those LA avenues. It has this California beach feeling, having a good time, which was very inspiring. I can’t wait to get some feedback from America on this track.”

“We spent a lot of time in California recording albums,” continues Klaus, prompted to justify the seeming duck-out-of-water situation of these Germans writing about LA. “Like Humanity: Hour One was recorded there for example. We played so many times there as well. But also Crazy World, with Keith Olsen, at the Goodnight LA Studios. We spend more time in California making records that anywhere else, except for the Dierks Studio, of course (laughs). But other than that, we went to Vancouver here and then, but we spent a lot of time in LA working on new music. So we have many friends there, and whenever we play shows there, like we just did in October, we feel very much connected.”

“And in a way it’s also a thank you to our fans in California, although I didn’t want to compete with the Beach Boys (laughs). There’s a very nice vibe to this melody and this song. And then Rudolf came up with ‘Always Be with You.’ He had already some elements of the lyrics but I wrote part of it, the chorus and stuff. And Rudolf, when he comes up with a song, I always try to find the right words and try to match the feeling to what Rudolf is saying with his guitar.”

The oldest song on the album is the title track, but that’s offered in the version we got on the tour edition of Unplugged: Live in Athens. Still, something happens to the band’s writing on the likes of “Holiday” and “Lady Starlight.” Does the proverbial light bulb go on? Did Scorpions learn to write better ballads as they transitioned to the Matthias era?

“Yeah, I mean, with “Holiday” it was back in the days when we did our first touring in England, and I remember with the British headbangers, the promoters were like, come on guys, it’s impossible to play that song in front of this heavy metal, denim jacket audience. And we played that song anyway and they loved it. “Holiday” was never a big hit, but with the metal community or rock community, I think this song was always in the top five. And of course they loved it and we never took it out of the set; we kept playing it. And it’s a wonderful solo from Rudolf, at the very end, in the fade-out, in the long version, and this is what you can hear here on this record, on this version as well. It’s a beautiful solo, because Rudolf really shines in his solos. It’s very touching; it goes really deep. It’s a beautiful song about dreaming, about going somewhere else. Back then it was like, leaving cold, wintery Germany and longing for the sun, trying to find a beautiful island and leave everything behind.”

That song gave Lovedrive a moderate hit at the softie end of things, and then next record out, that role fell to “Lady Starlight.”

“Yeah, that was the first song we worked on with a symphonic orchestra,” explains Meine. “I think it was Dieter Dierks who came up with the idea, and he went to Toronto to record this symphonic orchestra and put it all together. And it turned out to be a really beautiful song. We knew that writing ballads was always part of the Scorpions DNA, even with all those hard riffs and stuff. It was something which was always very important for us. We knew that we would shine with those ballads. I think for every rock band, the ballads are the ultimate kind of master discipline, you know? When we started out, we were inspired by bands like Led Zeppelin or Deep Purple, who did ‘Stairway to Heaven’ and ‘Child in Time.’ Even though they rocked like crazy, they came up with those beautiful, beautiful ballads. So we were always inspired by that, and when we started out, for us to write a ballad was a very special thing. To pull it off, to make it work, you know, it’s about melody, it’s about the guitars, of course, but it’s also about a singer who can do it. And we did it (laughs). Looking back, some of those big songs really became all-time classics, like ‘Still Loving You’ and ‘Wind of Change.’ But it was always something that was close to our heart, because it was all about showing what this band can do. Not only can we rock really hard, we can also go deep down into the emotions.” 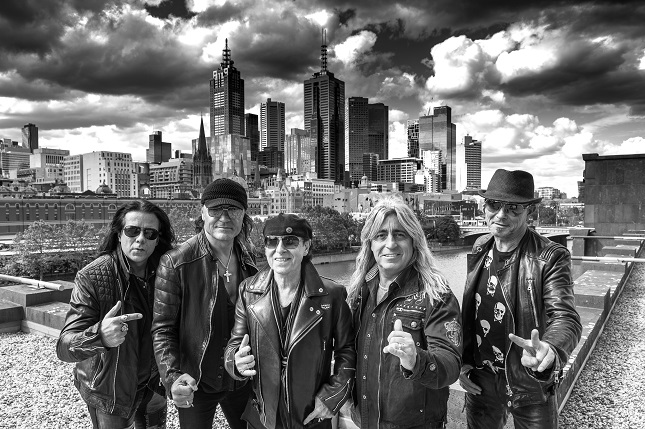 The better Scorpions ballads benefit from a few chord changes here and there that remind us that the light of life can only be seen in contrast to darkness.

“Yeah, a little bit of light, little bit dark,” agrees Klaus. “It’s probably our German mentality, you know. With a little Gustav Mahler in there sometimes as well (laughs), a little classical music. Metallica once said the difference between Scorpions and Metallica is we have more blues in our music and the Germans, they have more Beatles and those classical guys, and maybe that’s true. For those ballads, you need a dramatic kind of set-up to put off. And some of those songs became really big live as well. It’s not a Scorpions show without ‘Still Loving You’—that’s one of the most successful songs. But the ballads help us show all the different sides of the band. Also, for the audience, you know, they started bringing their ladies and their girlfriends, and it was like, ‘Come on, you gotta come along and see the Scorpions.’ So, you know, we had something for them as well. It was not only the hard rock riff, ‘Rock You Like a Hurricane,’ but it was also like the softer side, the emotions. It’s a special challenge to come up with a great ballad; not every band can do it.”

In closing, talk turns back to the switch in the drum position from James Kottak to Motörhead maven Mikkey Dee. The irony of Mikkey debuting on record for Scorpions on a ballads album—he’s on all three new songs here—is not lost on Klaus.

“Yes, of course. It’s funny that we’re putting out this ballads album, and at the same time, we have Mikkey in the band. Playing live, he’s definitely pushing us, giving us a harder edge when we play our shows. And it feels really good. As much as we appreciate and love James’ personality of playing over so many years he’s been with us, since Mikkey came in, it really adds a whole new rougher edge to it, to the whole band, and that feels really good. And our fans, you can really feel how much they love Mikkey and what he adds to the band. He’s a great guy, a lot of fun to hang with him, but he’s a fantastic musician, a powerhouse.”

One of the highlights of the recent shows has been the band’s cover of Motörhead’s “Overkill,” of course all the more resonant given that the song’s legendary double bass barrage is so much a part of Mikkey’s being.

“Of course I’m not Lemmy, I’m not trying to be Lemmy, and I never could be,” chuckles Klaus, who, let’s face it, has always been the most enthusiastic spokesman for the ballads in this band. “Because Lemmy was an icon, so unique in what he was doing and what he believed in and the way he was running Motörhead. So we do our own version, we do it the way I sing it, and the way we do it is the Scorpions way of ‘Overkill.’ But it looks like the fans appreciate it, and it really is a nice tribute to our good friend, the late Lemmy Kilmister. We put big images of him on the LEDs, and it’s really like taking a deep bow and saying, ‘Okay, come on, Lemmy, we hope you love this. You’re still with us. You’re still with us.’ And Mikkey goes crazy every night. It’s wonderful—he just explodes on his drums and goes totally nuts and the fans love it. He adds something very, very positive. Let’s see what happens when we go back into the writing situation. I’m sure that Mikkey can add a lot of good stuff. He’s a great musician and so far we are loving what he has brought to Scorpions.”