It felt a bit weird to be talking to Slayer so deep into their Repentless album cycle, given that the band had always been good with jumping on press right away when a new record would be unleashed. But one supposes that when you haven’t made a record in six years, even six months later, one is still going to be riding the high of getting the thing out. Which was the case with Kerry King, who spoke with BraveWords in the midst of new tour dates for said 12th Slayer opus.

Repentless is typical rage-filled Slayer at the other end of the sausage grinder, but what went into it was anything but typical. Not only is Paul Bostaph back on drums, but obviously, we’ve lost Jeff Hanneman, who has been replaced by Gary Holt, now bonded by blood with Tom Araya, Bostaph and King.

“You know, I really liked World Painted Blood,” begins Kerry, “and I still like it, but in perspective, I think this new one is better. And it has nothing to do with the fact that I wrote 95% of this; that’s just out of necessity, obviously. But it came out extremely over-the-top, and I think it’s awesome. Paul... you know, Dave is a great drummer. Both of those guys are top of their game, but Paul is incredibly meticulous and way more consistent. So you’re pretty much guaranteed to hear that what’s going on live is basically what’s going on in the record. I mean, he gets a little ambitious sometimes, and he has a big role, bigger than it is on the record (laughs). But the consistency of what we play... I hope people see us and think, man, they sound just like the fucking record.” 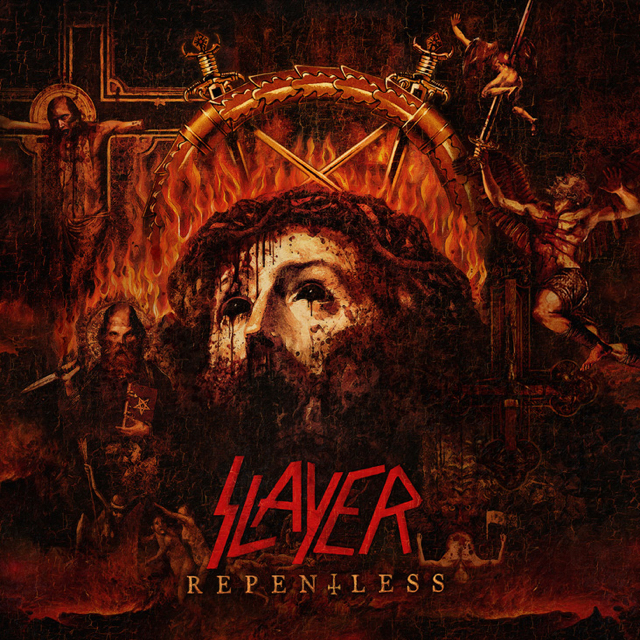 But the record almost never happened, although maybe that’s being dramatic. Still, fact is, Tom took some time to get on board taking Slayer forward after the booze-ravaging death of axeman #2, Hanneman.

“I just think... you know, we never really discussed that,” comments King. “Because he always knew I wanted to carry on. Because if Slayer wasn’t here, I would be writing music in a band that sounds just like Slayer. That being said, why don’t I carry on playing Slayer? Was there heartache? Of course there was heartache. And it’s like, Tom... it just took him a little more feeling it out. We kept touring, and I had tons of music, and I think he just wanted to make sure it felt right and that playing with Gary and Paul was going to be accepted, and work like the machine it does. I just think he had to figure things out for himself.”

And I guess all the guys have to look forward to the fresh concept of making a record with Holt’s writing as part of the bloodbath. Although, there might not be much of that right away, says Kerry.

“We’re signed with Nuclear Blast for another record, so I hope to be doing another one. You know, there’s so much material left over from the last record, it might be another situation where... I haven’t even gone over it with Gary whether he wants to contribute anything, but there might be a situation where there’s only three or four songs where he could, because I think we have seven or eight left over from the recording.”

And yet Gary is so much part of the band now... “Yes, when Gary came on to play, it’s been... we just passed the five-year mark last month. And you know, I didn’t say, ‘When you’re playing Jeff’s leads, play them note for note.’ I was like, ‘Do what you want. You are an established guitar player. I know you know what needs to be done here.’ And that’s got to be liberating for a dude coming into a hairy situation.”

And writing machine that Kerry is, he’s even the penner of doom lyrically-speaking on fully ten of 12 Repentless tracks. Will that continue or will we see Tom returning to his spiteful wordsmithing one day? “I got the ideas,” states King. “You know, it’s totally available for him to work on. But if I’ve got ideas and they’re strong, there’s really nothing for him to do.” 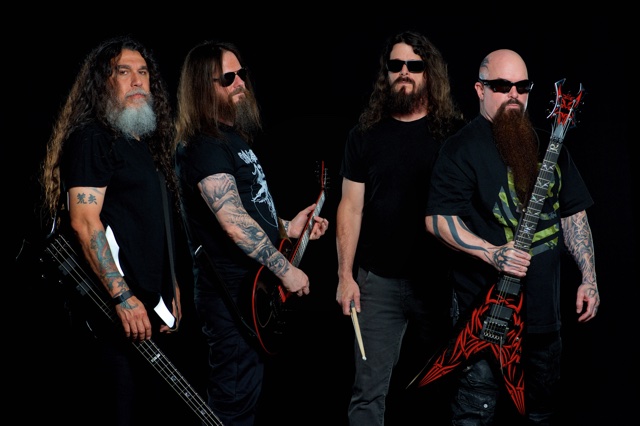 And there’s definitely no lack of ideas being generated by the real world, what with the recent terrorist attacks in Belgium. “Well, the world keeps proving me right,” reflects King. “And it’s unfortunate. I mean, essentially, these cowardly people are just going out and blowing up innocent people. And they’re just trying to bully you into changing how you live your life. And our lifestyle is so forbidden to them. But it’s a free lifestyle, and they hate us for being free. It sucks. You know, of course, I have to think about it, because I’ll be going to Europe this summer. And last time when it flared up, we were just ahead of it. We were in Paris just four days before the Paris thing went on. And we played Belgium the same amount of time before they shut down all of Belgium. So we had a taste of it last year, and it’s the same feeling. I just want to get them on some sort of method to say, stop fucking with us! (laughs).”

One other new hue and dimension to the Repentless album was the hiring on of Terry Date as producer. I asked Kerry if the Pantera and Soundgarden legend had any ideas around what kind of album he wanted to see out of the band.

“Nothing like what kind of Slayer album he would like to see. The funny part of the story, I was out to dinner with him the other night, but I’d never met him until we did this record. He did so much Pantera stuff, and I was always rollin’ with the Pantera guys, but I’d never met him until we worked on this record. But when his name came up, I was intrigued, because I hadn’t really heard of anything he had done very metal in some time. We hadn’t done a record in six years. So I thought the marriage of Terry Date and Slayer made a lot of sense.”

As for what he brought to the table, King figures, “Just what I want a producer to do, just get in there and get the performance that he wants. It’s not that I’m lazy, but when I’m in the studio, I’m not meticulous. I never want to be a producer—I couldn’t deal with it. Because, you know, I would go to him, ‘That sounds fine.’ And he would go, ‘No, there’s this thing right here.’ And I’m like, ‘Show me what it is, so I know what to concentrate on,’ and then give him the performance he wants. This time we had tours amidst recording sessions. And the thing I didn’t like the most was having to stop working on the songs that we were recording and rehearse for the tour. Because Paul has only got so much energy in the day. So we had to make sure we recovered for playing the next tour. But the cool thing about that was—and is—is that you can take the songs and stomach them for weeks, rather than just rush everything and get it all done at once. So there were good and bad parts for sure.”

Date didn’t turn Slayer into Pantera and indeed, as testimony to the band’s sound, he didn’t even put, really, any of a mechanized feel to the band at all—Slayer remains distinctly non-ProTools-sounding, very organic. But why? Or how?

“I think it’s just the ferocity of the machine,” reflects Kerry. “You hear a Slayer riff and it sounds like it’s going to stab you to death (laughs). I think it’s every aspect. The archaic leads, Tom’s machine gun vocals... his voice is made for this band.” 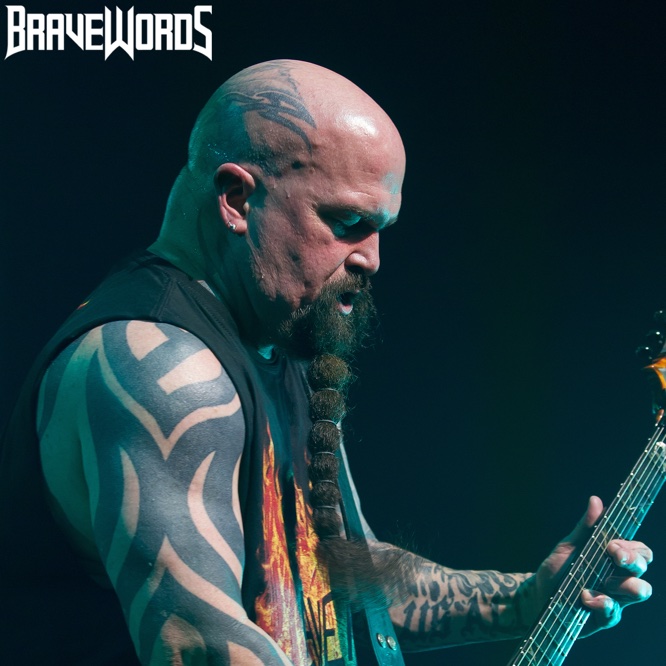 And this would be Tom, the Catholic. It’s an interesting dimension to the band we’ve brought up with the guys a few times over the years, but I wondered what the 2016 version was, with respect to rationalizing these two polar opposite... churches of worship.

“I don’t know, I think he realizes this is entertainment,” figures King. “And in a band called Slayer, what you get is what you see. That’s a lyric in ‘Repentless’ (laughs). You can’t stray too far from the past we’ve borne out of all the decades of records. Certainly now, you can’t take a left turn. The only thing that I would suggest if that would even be a thought, is go do another band for that kind of thing.”

One of those records from the past Kerry is referring to turns 30 later this year. Any plans?

“Man, I hope not,” laughs Kerry. “We’ve done that record so many times, for the 20th anniversary, for the 25th anniversary. We did it when we did the blood rain. And I get it, and I know it’s the go-to album for Slayer. If you ask 90% of the fans, that’s the answer they will give you. And it’s cool; they’re great songs. But when you’re committed to playing that, it takes a giant chunk out of your set. That’s what I don’t like about it.” 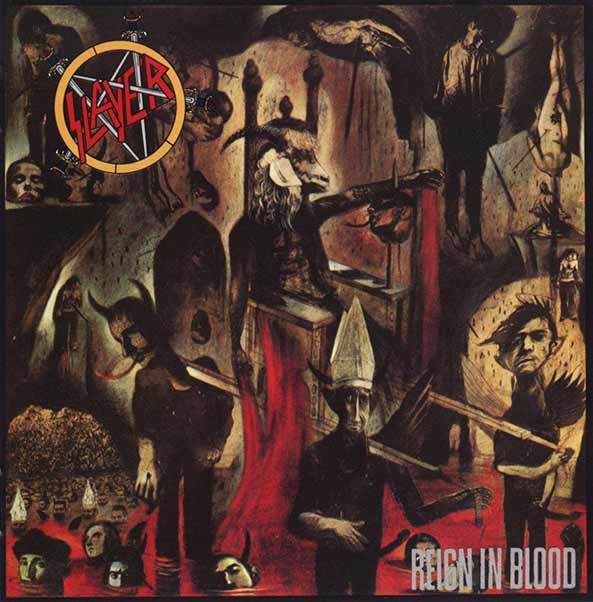 And so what is the “30 years later” reflection on why Reign in Blood is the “go-to” album for Slayer fans? Why was it such a step forward for the band after Hell Awaits?

“I think a lot of it has to do with signing with Def American, and Rick Rubin convincing us that we don’t need reverb to be heavy. But, you know, we didn’t go out of our way to make it special. To me and Jeff and Tom and Dave, that was just the next ten songs.”

What else did Rubin have to offer that might have been wise or sagely?

“Nothing really. You know, we’re always open for real suggestions or ideas. But back then, we were so gung-ho, and we were playing stuff that nobody really was doing but us. And so it was hard to convince us of anything that we weren’t immediately into. I remember, I think it was around South of Heaven, we were recording, and he had a suggestion for something, and we said no, and he says, ‘Well, it’s your career.’ That was a famous Rick Rubin phrase. But I think Reign in Blood was the pinnacle of his input. South of Heaven went down a little bit, and Seasons went down a little bit, and then by the ‘90s, it was nonexistent. And the funny thing, even to this day, when we’re talking to people about records, people ask us, ‘What’s it like working with Terry Date and without Rick Rubin?’ I’m like, I haven’t worked with Rick Rubin in 20 years. I’d be lucky if I ever even saw him (laughs).”