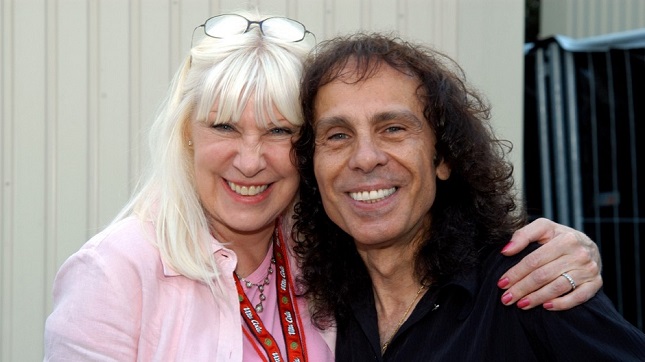 It’s hard to believe that it’s already been six years since the passing of the legendary Ronnie James Dio. But his music and presence live on, thanks in large part to Wendy Dio, who organized this year’s edition of the Ride For Ronnie fundraiser that just wrapped up, as well as the just-announced A Decade Of Dio: 1983-1993 box set. And it turns out that there are other Dio-related projects on the horizon, which Wendy recently discussed with BraveWords correspondent Greg Prato.

BraveWords: How did this year’s Ride For Ronnie fundraiser go?

Wendy Dio: “It was fantastic. We made over $50,000 this year, and we gave $25,000 to UCLA, to Dr. Wong - he is developing a saliva test, to figure out if someone has stomach cancer, colon cancer, or pancreatic cancer. You would go for your usual check-up and you can have a saliva test. We started off at Harley Davidson in Glendale, and rode. We had some people from Sons Of Anarchy - Sean McNabb, Emilio Rivera, Michael Beach, Star Fields. Lita Ford played and supported us and rode a bike, Dio Disciples played, Great White, Budderside, Sonia Harley. We had about a thousand people there and 300 drivers. It was a great, fun day - everyone having a great time, listening to Ronnie’s music, keeping his music and legend alive, and raising money for cancer.”

BraveWords: How is Ronnie’s autobiography coming along?

Wendy Dio: “It’s coming along slowly. It’s one of the things I have to get done this year, but we’ve been, so, so busy with a big surprise I will tell you about later on.”

BraveWords: And there is an upcoming Dio box set.

Wendy Dio: “Yes, A Decade Of Dio: 1983-1993. It’s remastered - it wasn’t destroyed by being too modernized, but it’s modern. There are a couple of bonus tracks on there and some really good great artwork from Marc Sasso.”

BraveWords: Any other future projects on the horizon?

Wendy Dio: “We’re probably going to do the other four albums, and I have a couple of unreleased tracks, which will go along with those. It wouldn’t have gone with this one, because the tracks Ronnie was working on were Magica 2, so it didn’t make sense to release unreleased tracks without Magica 1. That will be the next. We might do some live recordings that haven’t been heard before.”

BraveWords: Last time we spoke, I mentioned if there is a possibility of the silent pro-shot concert footage on YouTube of Black Sabbath circa 1982 seeing the light of day. Any updates on that?

Wendy Dio: “I would talk to Gloria [Butler] obviously, and Geezer and Tony. I don’t think we will do anything while they’re still doing Black Sabbath with Ozzy, because it wouldn’t be fair to either person to do that.”

BraveWords: Do you agree that Ronnie’s music is as popular as it’s ever been?

Wendy Dio: “I would think so, absolutely. Our fanbase for the past six years, we have 2.5 million people on our Facebook page. My whole thing is to keep Ronnie’s music and his legacy alive. I think that also, Ronnie is one of the innovators, and all the innovators are getting older, passing away, or retiring. Really, you can’t reinvent the wheel that many times. All these bands - Black Sabbath, Deep Purple, Judas Priest, and Iron Maiden - when they’re gone, there’s not that much coming up to take their place.”