What If PAUL DI’ANNO Had Remained In IRON MAIDEN? 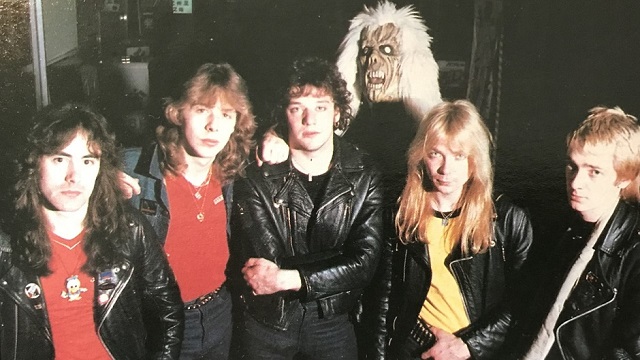 Would Maiden have gone on to enjoy the same worldwide success if singer Paul Di'Anno remained behind the mic? A question that many a metalhead has pondered over the years. And in my book from a few years back, Iron Maiden: 80-81 (which as its title states, focuses solely on Maiden’s “Di’Anno era,” and features exclusive interviews with some of metal’s most renowned names), this question was thoroughly investigated…in fact, an entire chapter was solely designated to it! Below is an excerpt from the book, which is available for purchase as a paperback version and a Kindle download.

John Gallagher (Raven singer/bassist):  “Ah, there's the $64,000 question. It's debatable. I'm not sure how much of the material Bruce wrote on the third album (Dickinson did not write any songs for The Number Of The Beast album). I honestly don't know. But if he'd had his act together, maybe. If he'd had his act together, yeah, they would have done stuff. He didn't have his act together. It wasn't going to happen. And it was really the music and the fact that he just couldn't perform to the level that he should have. He bought himself a one-way ticket out of that band. And those guys did what they had to do. I'm sure it was very painful, because they were all mates and they'd all grown up putting this thing together for a long time, and a lot of work. People just don't know the stresses and strains that the personal relationships between bands can get. We can only guess what went on with all that stuff. But it worked out - they found the right guy. They found the guy that literally took them to the next level. And a guy who is one of the premiere performing artists that are out there. Bruce is a force of nature - God bless him.”

David Ellefson (Megadeth bassist):  “I think that's kind of a two-part question. As far as stylistically vocally, I think Paul was probably a little limited as far as mainstream appeal. And then as it turns out, you never know what someone's personality is like within a group. Lots of times when changes are made, it's because of a person who the group didn't feel was going to be able to go the distance and really keep it all together. And that's a whole other side to the thing, it's a risk when you're in a band and you have to make those changes, because ultimately if that personality isn't going to be able to hold it together at the lower levels, chances are, they're not going to hold it together at the higher levels.

“And I don't know any of the internal dynamics of what that was in Iron Maiden. To me, they sounded awesome, but hitting the big time isn't for everybody. I've never seen Paul play live, and I would like to hear him sing some of those Maiden tunes, because I know he's out gigging and doing stuff. But Iron Maiden, they accomplished some pretty remarkable stuff once they made the change with Bruce. Bruce having to go back and sing early songs, that's not always easy for a singer to do, too, because certainly fans grew up listening to Paul Di'Anno, so for Bruce to have to go back and sing songs, that probably puts him out of his comfort level too. To answer your question, everything happens for a reason. And it seems the way things panned out worked out really well for Iron Maiden, and I think that's great for all of us who are fans.”

Wil Malone (Iron Maiden album producer): “That's difficult to say. Yeah, I think they probably would have. But it depends really on the original singer, whether he could hold up. I mean, there must have been a reason why they got rid of him. I have no idea what it was.”

Charlie Benante (Anthrax drummer): “I don't know. That's a hard question to answer, because you don't know that for sure. Would AC/DC be as popular if Bon Scott was still in the band? I don't know. But I'll put it to you this way - I can never hear The Number Of The Beast without Bruce Dickinson, I can never hear Back In Black without Brian Johnson. So I think maybe in the back of my mind I don't think the band would have been as popular without those changes, but you never know. I mean, Metallica went on to be huge, and I don't think James would say back in the day, he was this great ‘Rob Halford type of singer,’ you know what I mean?” 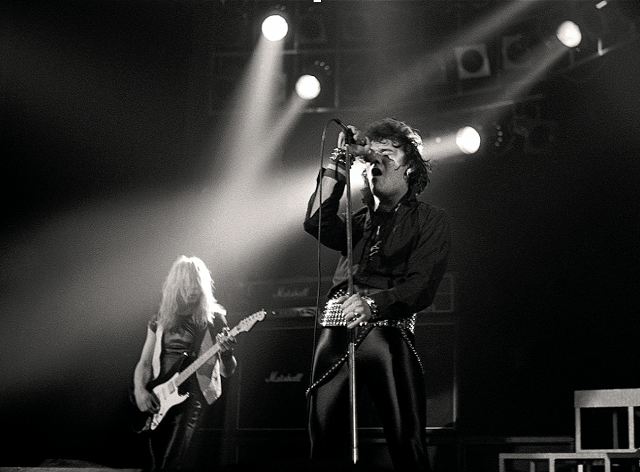 Dennis Stratton (Iron Maiden guitarist, 1979-1980):  “No, I don't think they would have had worldwide success if Di'Anno had stayed, because he was hard work, he's a bit silly in the head, and I would never work with him…I wouldn't even talk to him. Just hard work.”

Biff Byford (Saxon singer):  “No. I don't think so. I think Bruce brought a sort of style to Maiden that once Bruce joined, his melodic style and his writing style made an impact on Maiden. I think they went much more mainstream.”

Mike Portnoy (Former Dream Theater drummer): “I hate to say it - with all due respect to Paul - but probably not. I think Bruce was a huge, huge part of the band's sound and when the band finally really broke through with The Number Of The Beast, Piece Of Mind, and Powerslave, I think a big part of it was…not only Bruce's voice, but also his look. Paul…at that time, nobody in metal had short hair - it just wasn't the look at the time. And Bruce had the long hair and was like a ‘Golden God.’ I think a big part of Maiden's mainstream breakthrough was due to Bruce joining the band.”

Scott Ian (Anthrax guitarist): “Honestly, I don't think they would have been as big. I just don't think he's the frontman that Bruce is, and couldn't have sang those songs on The Number of the Beast or Piece of Mind or Powerslave - some of those bigger, epic, or even let's say, "commercial" in quotes, because it's not like they were a radio band. But I just don't think it would have worked. Those songs wouldn't have been as great as they are without Bruce on them. I can't imagine it any other way. Just the same way I feel like I only really want to hear Paul singing the Di'Anno stuff. Bruce sings it and obviously they do those songs live, and those are the songs, but I only want to hear Paul really singing those. Bruce does a fine job on them, but it's not the way they're supposed to sound in my brain. I don't think they would have become the band they became, unless they made that move. That really did push them to the next level, where they were able to separate themselves from the pack, because you had that whole scene of bands coming out of England, and there were so many bands and were all trying to do something different and original…and a lot of the bands sounded the same.

“Bruce really set Maiden apart from the pack, because now they had a true frontman, like in the vein of Rob Halford or Ronnie James Dio. They had 'their guy' - they had that position covered, whereas none of the other bands, except for Motörhead in a different way, because obviously Lemmy as a frontman, it's iconic in a completely different type of way. But all the other bands, nobody had a Bruce. And Maiden found that missing piece of the puzzle, which was going to be able to take them to that next level, where Judas Priest had gone, and Ronnie had gone either with Rainbow or Sabbath or his own solo career, obviously. That was the missing piece of the puzzle, truly, I always felt…not felt, but thought about after the fact, that once Bruce was in, they found their guy. They found the frontman that was on a level with the great frontmen that came before him.” 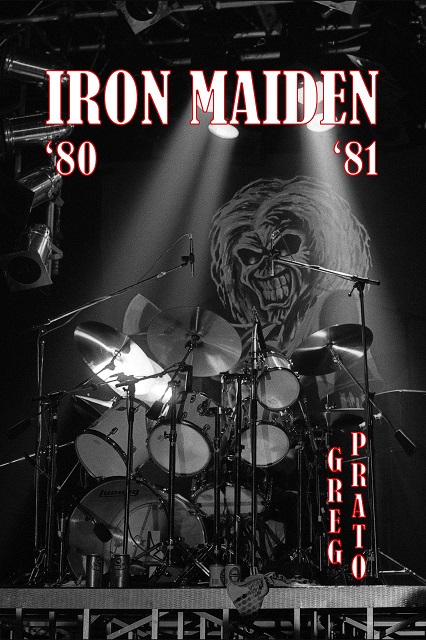 Doro Pesch: “Oh man, it's hard to say. Since I'm doing it now for so many years, I know it's hard to keep the band together. And if somebody leaves, you have to make the best out of it - to keep it going. I think it's always very tragic when the singer has to be replaced, or when the singer leaves. It's a very hard challenge for a band. But I think they pulled it off great, and I think they always had great singers. I love Paul Di'Anno, but I love Bruce Dickinson so much, too. It's hard to say. I know there are diehard fans of Paul Di'Anno and that line-up, but I think with Bruce, they went to "superstar status" in heavy metal. I think everything has its time and you always make the best out of it. I love all the singers - they have a good hand in choosing the right people for the right time, for the right records.”

Paul Di'Anno (Iron Maiden singer, 1978-1981): “They've had a couple of good ones [songs after Di'Anno left the band], but they've had some stinkers as well, over the last couple of years! Oh, who knows? Who can tell? I mean, if I could tell the future… [Laughs] You never know, you can't tell, can you? I think we would have still carried on the same direction as they did - like, The Number Of The Beast stuff and all that.”

Lips (Anvil singer/guitarist): “I think that Paul had a very unique voice, as well. It's about the friendship within a band, I think. If you haven't got that, then it's no good - it doesn't work. I think that Bruce was a huge advantage for Iron Maiden. It's one of those very few and far between moments for a band to change singers and for it to work. Bruce is a great singer and he's in a great band, and the combination worked.”

Richard Christy (Death and Iced Earth drummer): “I think they still would have. I think so. The songs were there. It would be so interesting if they did a version of 'The Number Of The Beast' with Paul Di'Anno - just to see what it would have sounded like. The important thing about Iron Maiden is that they write amazing songs, so I think anybody singing with them, they would have been just as popular and just as good. Yeah, I absolutely think they would still have gone on to be the legendary Iron Maiden that they are today.”

(Photo from book and black and white photo from Harry Potts)