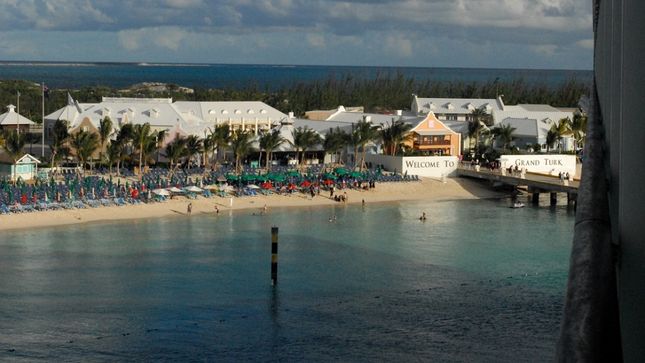 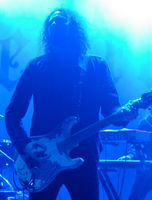 Awoke to bright sunshine and the turquoise waters surrounding the white sand beaches of Grand Turk. Impressive. Picking up a towel before disembarking (but remember to return it to the pool deck office, lest $25 be added to your bill), spent the afternoon sitting in the sun, sipping local beers (avoid purchasing from cantinas, opt for islanders selling from ice chests, unless your savings rival Fort Knox) and ultimately, a late lunch (slowed by the laidback “Don't worry, man” ease of the server/cook) that included conch and seafood chowder. A guy could get used to this! Despite the tropic temperatures, still some diehard metalheads in jean/leather jackets and long pants. Ouch.

Headed back on board, to wash up, before another night of music, beginning at 5 PM, with Evertale. By now, all 61 bands had played at least once, although it was my first/last opportunity to hear the Blind Guardian inspired Germans. The juxtaposition of witnessing a band in a converted ice rink seemed weird, given the activities of the last few hours. Taking a musical cue from the Guardians (as well as a Hansi Kursch approved all-black wardrobe), the twin guitar foursome arrived on a darkened stage to epic soundtrack (“Paladine's Embrace”). Speedy, power metal, with up to three vocalists and plenty of guitar harmonies in the name of the game. There's a section of “The Dragon's Lair” where the bassist sings, then the lead vocalist/guitarist and finally, the other string bender, in succession on stage, like a little kids round (albeit with different lyrics). 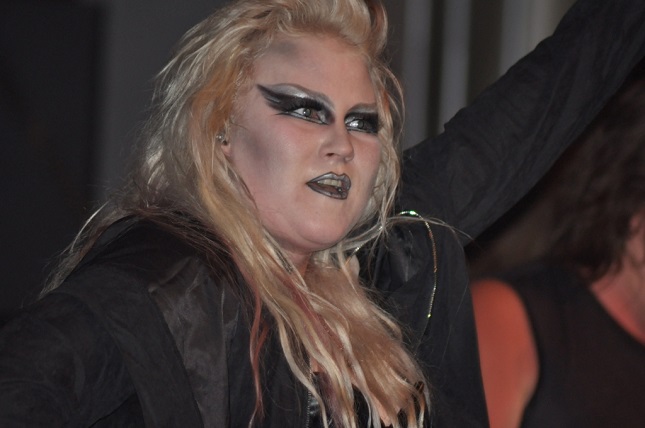 Also wanted to catch a bit of Battle Beast. Even though the recent album didn't agree with me, love the simplicity and energy on the early discs. However, all but one song was lifted from said Bringer Of Pain album. Noora Louhimo works herself and the fans into a frenzy, but still can't get the visual of John Candy on SCTV playing Divine out of my mind. The title track, up second in the running order, was energetic, but “Familiar Hell” sounded a bit too much like ‘90s Heart to these ears. 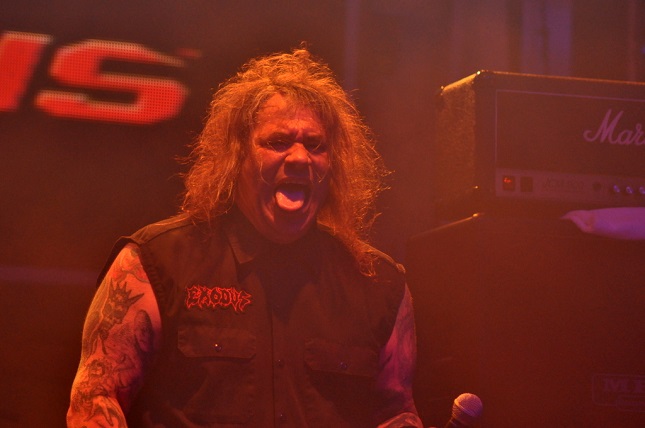 First must see on the pool deck today was Exodus, who began late, then ran through a full Def Leppard track as an intro (these the same guys who raged against posers, back in the ‘80s? Granted it was “Rock Brigade” from On Through The Night, but doubt if earlier band name Exodus would include such a cut, let alone have Zetro visibly singing along and air drumming). Before they went on, the stage was filled with theatrical fog, apt since the setlist was smoking, the band on fire. Get this: one-two opening punch of “Bonded By Blood” and their signature tune. Already better than yesterday's show! Zetro had worn a band name embroidered toque, but sleeveless shirt, ferociously waggling his tongue like some rabid dog impersonating Gene Simmons. Nice to hear “Fabulous Disaster again. “Body Harvest” was just one of two post-Eighties cuts aired. Like the night before, there was “Deranged”, but from there, things headed up. Who doesn't like “Metal Command”? They brought up Sepultura guitarist Andreas Kisser for “Piranha” and while there was a temporary lull for “Blacklist” and the big MTV hit, “Toxic Waltz”, everyone went “home” happy with a crushing “Strike Of The Beast”. Hopefully a good chunk of this set will be featured on the two week American stint that begins at the end of the month.

Really glad to catch the start of the Evergrey show, as it was a unique presentation. Initially, keyboard player Rikard Zander was alone, onstage and backlit. The ranting evangelist voiceover from “When The Walls Go Down” blaring through the speakers as Zander added tinkling ivories. Then drummer Jonas Ekdahl, brightly lit between the cymbals, appears and the two drive towards otherwise instrumental crescendo. Only in the last minute do bass and guitars enter the picture and they all deliver “Recreation Day”. Amazing visual presentation, for a rarely heard, emotional track. Should have known from that bit of cinéma-vérité this was going to be a wholly different beast from the heavy metal bashing unleashed last night, on deck. After that introduction, Tom Englund even said as much, “Those who might have seen Evergrey yesterday have stepped into the darker side of the band today.” More emotive, less from the gut, they perform in virtual darkness, the few colors there were are deep purples, reds & blues, all but obscuring the musicians' faces, even frontman Englund, except for the odd blast of strobes. A gritty “Still In The Water” enliven things, with a slight mechanization not typical of the Swedes, followed by “Black Undertow”, another moody showcase for Zander, who also shines on “Missing You”. Not much in the way of heavier moments (relative to their surroundings), maybe just the frenzied guitars of “Mark Of The Triangle”. Quite the musical dichotomy.

Much like the Swedes, Korpiklaani opted for an optional vibe. Instead of the bright outdoor, where songs of booze and lively hummpa tempo were the norm, the giant theater hung a backdrop depicting a dense forest, as the Finns toned things down. Sure, “Tequila” is still in the running order, to enliven things, as is the repetitive (almost singular) lyric “Rauta”, but the likes of “Lempo”, “Pilli On Pajusta Tehty” and “Tuonelan Tuvilla” practically drone, in comparison to the polka-esque tempos for which they're best known. “Petoeläimen Kuola” initially threatens to completely lose it, but reels back to mid-tempo pace. They still look like the metallic Village People, each a distinctive member: guitarist Cane, with floppy cowboy hat, dreadlocked singer Jonne, tonight in fringed buckskin leather jacket, the fiddler is all in white (with matching cowboy hat) and the bald, apart from braided quay, accordion player.

On the opposite end of the intensity spectrum, there's Meshuggah, topside. Almost entirely obscured by stage smoke and blinding array of strobes, the modernized quirks of the technically obsessed Swedes quickly become evident. The stage was devoid of any amps or equipment, as all but the drummer stood motionless across the front of the stage for the opening “Clockworks”. Then all hell broke loose, players scurrying about the stage, as bald singer Jens Kidman practically engulfs the mic, as he gives Lamb of God's Randy Blythe a run for his money, in the powerfully strained screams department.

Some things never change, like the red lighting for Cannibal Corpse, as well as George “Corpsegrinder” Fisher pin wheeling his hair (between bellowing lyrics) and bassist Alex Webster: feet splayed, head down, pumping out the vicious bottom end. Circle pits, crowd surfers, even a giant inflatable hammerhead shark roam the massive gathering on the theater floor. A couple of singles off Red Before Black are up early. “The Wretched Spawn” is particularly brutal tonight. In one of his few moments speaking to the crowd, George hilariously introduces “I Cum Blood”, saying, “Sounds cool, until it happens to you!” Best known/controversial track, “Hammer Smashed Face” is saved till the end. Don't know if I can get to sleep after enduring this, so a little decompression, back at the casino bar.

Honestly, not much left to listen to tonight, having either already seen the band (and been disappointed, thus no need for repeat) or holding no interest from the start. Besides, the final day begins early, with Exciter on the pool deck. Good night!