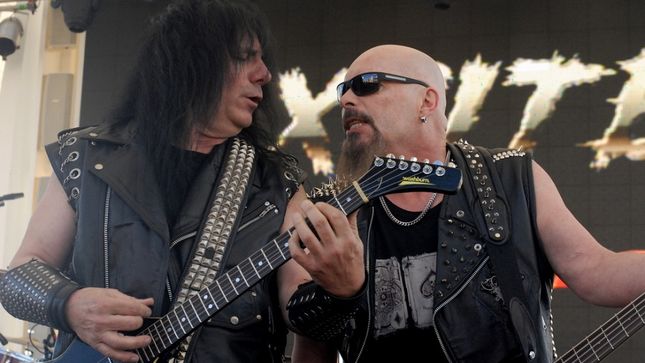 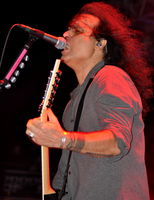 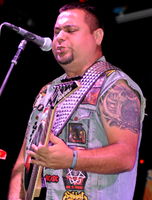 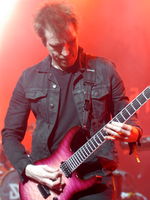 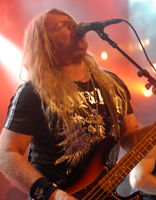 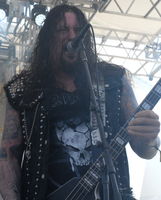 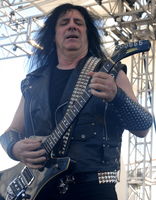 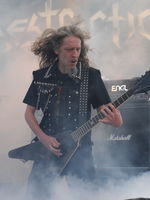 The grand finale! One last day that will have to last us all, until we reconvene a year hence. For Americans (and quite a few others) Sunday also contains the annual pageantry of the Super Bowl, which the ship not only televises live, but provides a tailgate spread of wings, ribs, burgers and nachos. Always find myself watching parts of the game, intersected by taking in warranted band performances. However, the humid day kicked off, for everyone, at 10 AM with neighbors to the North, Exciter. 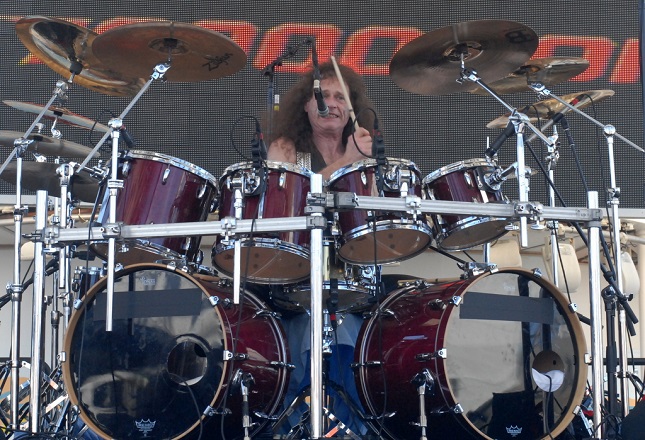 All night, could feel the boat rolling excessively. Even the next morning, on the pool deck (typically the most stable platform) the footing was shaky (even more so than after three days of partying). Down below, would later witness even greater pitch and yawl, threatening to jilt my photographs. Decent number of early risers to take in Exciter, who began with “I Am The Beast”, Dan Beehler perched atop an impressive spread of drums & cymbals. When he introduced “Violence & Force” as an old one, guitarist John Ricci quipped, “They're all old ones!” No matter. By the Ricci started, grinding guitar “Victims Of Sacrifice”, Beehler was shirtless and breathing hard. The punk intensity “Cry Of The Banshee” offers lots of open chords, until the solo section, when Ricci (who carries the show, visually) and bassist Allan Johnson step to the center. The bassist announces “Delivering To The Master” only to learn there's been a last minute change to “Pounding Metal”. Dan jokes, “Let him talk to the crowd once and he fucks it up.” For the well-loved gem, all three musicos sing the titular chorus, aided by the fist thrusting choir of fans. Apparently Beehler worked on his comedic timing, all those years outside the musical spotlight, as he continued, in good mood, announcing “Rising Of The Dead”, then adding, “Seems like right now.” Given the early show, not sure if he meant the crowd or the band. Of course, had to play “Heavy Metal Maniac”. Somewhere there's video of your truly wildly headbanging to one of the greatest anthem of the ‘80s. The concluding “Long Live The Loud” once again saw the trio handling part of the vocals. Powerful way to start your day. Better than breakfast! 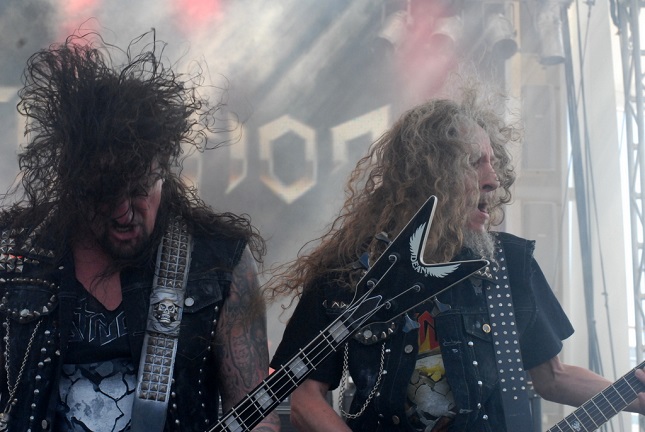 Sunday is also, for some unknown reason, an unofficial cosplay/costume day, although there were fewer participants this year, than in the past. That included a pair of gents dressed up like Jesus Christ, complete with halo of thorns, thrashing and crowd surfing (in Jesus Christ Pose, naturally) during Destruction's open air set. Curious phenomenon of the outside stage: when heading south, any attempt to use a fog machine is quickly rendered useless by the ship's movement and prevailing breezes, yet on the return voyage, it's possible to fill the area. Witness my photos of the Germans. “Curse The Gods” opens, after which Schmier claims the 11:30 AM start is the earliest of his 35 year career. Adlibbing, the sun burnt bassist/frontman dedicates “Nailed To The Cross”, saying, “This one's for Jesus in the mosh pit.” Nice! During “Mad Butcher”, he works his way across the stage, stopping at each of the three mics. “Dethroned” and “Life Without Sense” soon follow, as the set ends with the same stretch of old school classics as the first night (“Antichrist”, “Release From Agony”, etc). Always great to hear/see Destruction.

While a portion of the crowd stuck around for the belly flop contest, in the adjoining pool, headed down to the Alhambra theater for Seven Kingdoms, which would be anything but a flop. Sabrina Valentine/Cruz was decked out in leopard print leotard, with hamburger slippers. Kid you not. Guitarist/mainman Camden Cruz later informed me this is now something of her calling card, unique footwear. The Florida based power metallers began with “After The Fall”, guitarist Cruz in attack mode. “The tale Of Deathface Ginny” sees them aligned four across the front of the stage. Didn't have the chance to watch the whole set, as there was a still personal (fanboy) business to attend to, so made tracks after the speedy gallop of out “Kingslayer”.

In the Day 1 review, spoke about the desire to catch Colombian speed metal merchants Revenge. A long running world class outfit, who deserve to be better known. The future should be looking up, as European labels have finally taken notice and the Spitting Fire CD (originally released last fall, in their homeland will soon be available worldwide. The early morning teaser only whetted the appetite for a full scale performance, which unfortunately, was restricted to the minuscule Pyramid stage (just my second visit of the cruise), where only the people standing at the barricade can see the band members. Once again, the room filled with countrymen, draped in the Colombian tri-colors. Singer/guitarist Esteban Mejia had a similar flag tied to his mic stand. More lively than the graveyard shift gig on the first day, the band feeding off fans being right in their face. “Fire Attack” is a slower introduced number, until a guitar flourish kicks it into a double bass drum, high pitch voiced rager. The abruptly ending “Heavy Metal Friend” (off the current disc) has an old school Teutonic sense of rhythm, similar to early Helloween Running Wild and/or Grave Digger. Lofty goals! “Beer Maniacs” rides a dirty, grittier guitar tone, while “Motorider” unleashed some tasty twin guitar interplay. During “Rise Of The Brave”, despite the low, ten foot ceilings, with hanging lighting fixtures, crowd still stage diving and circle pitting. In appreciation, Mejia headbangs and the other Revengers throw the horns. The start-stop “Metal Massacra” quickly shifts into high gear, a riff crazy gem. Again, they end with buzzsaw guitars of “Metal Warriors”. Slicing through a sequoia, with a chainsaw, couldn't churn out a more consistent rpm. Investigate & support the underground!

For the first time in four trips, actually conducted an interview on the ship, with Sabaton, but finished up in time to still catch the Primal Fear sound check, in the big theater. Alex Beyrodt ran through Queen's “Tie Your Mother Down” to check his guitar sound. When it came time for the real show, was virtually the same setlist, “Running In the Dust” replacing “Sign of Fear”. Pumping “Chainbreaker” is what they do so well, helped by a thousand or more voices in the crowd. Ralf Scheepers' sustained notes in “Metal Is Forever” are unreal.

German loyalties were split, as up on the pool deck In Extremo were dishing out their brand of medieval metal. Stopped by, mid-set for a few photos, as the long horned “bagpipe” orchestration is worth more than the metaphoric thousand words, the pair zig-zagging around the stage, the exaggerated ends failing to collide with one another. The pipes' high pitched twang cuts right through the sound. Always loved the energy within the music and songs like “Vollmond”, “Unsichtbar” and “Feuertaufe”, even though sung in their foreign tongue, can still be enjoyed by non-Deutsche speakers. It's all about conviction and melody, which In Extremo have in abundance.

With the football game in full swing and $100 of my money riding on the Eagles (plus five points!) just a brief jaunt back to the theater for Dark Tranquillity, with former Arch Enemy guitarist, brother of Michael, aka Chris Amott now firmly in the fold. After the “Monochromatic Stains” opener, Mikael Stanne, who gets right in the face of the audience/photographers, announced that the set would feature different songs than their earlier performance, a good things for fans and hopefully future 70K participants will entertain doing the same. Of course “Misery's Crown” needs to be part of every show.

Speaking of set swapping Swedes, Sabaton had previously made all aware of their intent: no repeated tracks, between the two performances. Whereas the debut leaned towards older/more obscure/European airings, the final night's set (still with a few surprises) tended to the more recent albums.”Panzerkampf”, up second, was unexpected. Smiling, joking frontman Joakim Brodén asked if the crowd wanted to hear the new song in English or Swedish, adding “We can also do other languages, but let's not go there.” Cue “Gott Mit Unis”. Not really a festival song, a somber “Final Solution” should never be forgotten, although in North America, 70+ years after the fact, its impact might (sadly) be muted. A recent air, “Winged Hussars” sees the perpetually active Brodén punching the air, while bagpipe introduced Blood Of Bannockburn” has new guitarist Tommy Johansson playing the six-string vertically.

Surmise Carlous Rex was a big US hit since it was a concept/story and didn't require a ton of background historical knowledge. OK, even the repeated tales of finality, on Last Stand can translate, but the vast majority of each individual Sabaton songs go beyond the usual fantasy or dumb lyrical content in metal. It's real life (or was). An empty, black stage (apart from sporadic tracer fire strobes) during the Jon Schaffer (Iced Earth) recited “Dairy Of An unknown Soldier” gives the band a a brief break, before it's right back into “The Lost Battalion”. Instead of the now standard comedy bit, where Brodén jokes with Chris Rörland about his ability to play guitar (the singer usually plunks out “Smoke On the Water”), they finally employed the twist witnessed in Europe, several years ago, where Joakim (who began his career as a keyboardist) rips off a Metallica riff, from Kill 'em All, as the crowd goes wild, which segues into a bouncy “Resist & Bite”. Still with a third guitar, the singer eventually dispenses with the instrument, making “YMCA” hand gestures instead.

Calls for “Swedish Pagans” fall on deaf ears, having finished the first night with Brodén's bane. The football contest now complete, “Screaming Eagles” is all the more appropriate. The return of last night's inflatable shark, and crowd of surfers, frival or pit security's attention. Never get tired of the racing, siren intro to “Night Witches”, then “To Hell And Back” (surely no one feels the title is analogous to this weekend?) brings this second helping to completion. 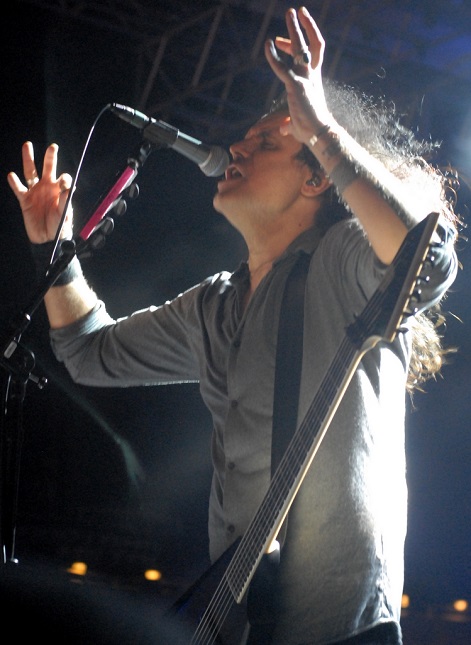 One last trip to the top of the mountain, outdoors, for Kreator. After a couple of quick photos, wanted to put down the camera, relax and be a fan. Late night wind whipping his hair, Mille Petrozza stands firm, in his legs splayed, slightly hunch stance. The set is similar, but not a carbon copy of  what was played three nights earlier. After the same one-two opening salvo, “Extreme Aggression” is one of this weekend's, as yet, unheard classics. One of my personal faves, “Enemy Of God”, is now a staple of the live show (so much so it's part of both sets, something “Flag Of Hate” can't say). The consecutive old school triumvirate of “Pleasure To Kill”, “Awakening The Gods” and “Total Death” is hard to beat! So I take my leave, to have a few hours with friends, before we dock, then go our own way.

People from 75 countries were part of 70,000 Tons this year. Next year, it sails to Labadee, Haiti, January 31st-February 4th. While the destination is secondary to the music, will you be part of the excitement?