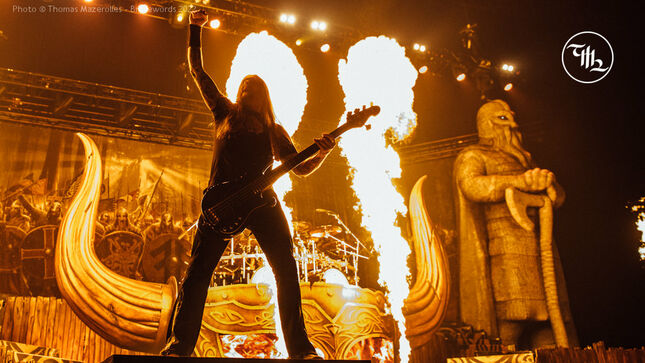 The heavy rain and the strong wind were not going to stop metal fans from attending their last big concert of the year and were waiting impatiently for the doors of the Place Bell to open so they could have their fill of death metal. Amon Amarth was finally here along with Carcass, Obituary and Cattle Decapitation.

Cattle Decapitation started the evening with their brutal music in from of many fans that were mainly located on the floor as the stands were gradually filling up. They barely had room on stage to play, let alone move around. Their direct and powerful music was brutal but the sound was not very good and we could barely distinguish the vocals of Travis Ryan when there was too much low end in the music. In addition to that, the lighting was very dark and even if it was fitting for their music, more lights would have been beneficial to highlight their performance. The short set was focused on their album titled Death Atlas and they also played a new song called "We Eat Our Young", from the forthcoming 2023 release. Fans pushed each other with energy during "Bring Back The Plague", but this was only a warmup for what was yet to come.

Obituary was next and we could feel the excitement in the crowd as their introduction music was ending. "Snortin' Whiskey, Drinkin' Cocaine" has been
their introduction from a few tours now and it never gets old. Once John Tardy and the boys kicked things into gear with "Redneck Stomp", you could see that fans received this as their cue to headbang and push themselves furiously against each other. The band opted to play songs from as many albums as possible during their way too short set. Their cover of Celtic Frost’s "Circle Of The Tyrants" was pure delight and fuelled the fans even more. Again, the lights were very dark, but that did not matter to the fans in the pit that were focused on pushing each other. The band followed with a new song, "The Wrong Time", from their forth coming album entitled Dying Of Everything before ending their set with the songs "I'm In Pain" and "Don't Care".

Carcass was up next and their white backdrop displaying a ribcage was a breath of fresh air. As usual, their intense music is a source of inspiration for the fans in the mosh pit. The first thing we notice is that their performance is very well illuminated, maybe a little too much because it is hard to see the images that are projected on the backdrop at times. Nonetheless, the sound is pretty good and we can see that Jeff Walker is having a blast on stage. He interacts with the fans in French as much as he can and even plays his bass on road cases that are located in the security pit. They focused their set on their most recent album Torn Arteries, but also on Heartwork and Necroticism: Descanting The Insalubrious, with three songs each. It was also Bill Steer’s 53rd birthday, so Jeff got the crowd to celebrate this before continuing their melodic death metal assault with the songs "Corporal Jigsore Quandary", "Heartwork" and "Carneous Cacoffiny". Even if their set was longer than the one of the previous bands, it was still too short for many.

It was now time for the fans to enjoy the band that they all came to see. They all know that the front curtain showing the AA runes will shortly drop so the festivities can finally begin. Armed with a new album called The Great Heathen Army, Amon Amarth finally gets to show the fan their huge production that includes a giant Viking helmet acting like a drum riser. The succession of the songs "Guardians Of Asgaard" and "Raven's Flight" electrifies the crowd instantly and got the fans pushing each other vigorously and crowd surf at will. Interestingly, the bands regrouped the three songs from their new album as to be done with them as soon as possible. This rare concert in an arena allowed the band to display their inflatable statues, inflatable dragon and tons of flames throughout their set. As always, Johan Hegg is very dynamic on stage and constantly interacts with the crowd. The fans saw the Norse god appear during the song "Deceiver Of The Gods" and two Vikings fighting each other during "The Way Of Vikings". Not satisfied with the daily exercise, fans jumped during "The Pursuit Of Vikings", made a huge circle pit for "Get Into The Ring" and rowed during one of their songs. But now the band has a specific song for the occasion and it is appropriately called "Put Your Back Into The Oar". The show also included a local clan of Vikings called Hird Hafn Hullsborg and they gathered on stage during the song "Shield Wall".

Fans have such a special bond to this band that they did not hesitate to sing the traditional Olé, Olé, Olé a few times during the show, way before the encore. It obviously was chanted again before the song "Twilight Of The Thunder God" where Johan returned to stage with his huge hammer.

Fans really liked their death metal evening, but you could clearly see that they were there to see mainly one band and that was Amon Amarth.