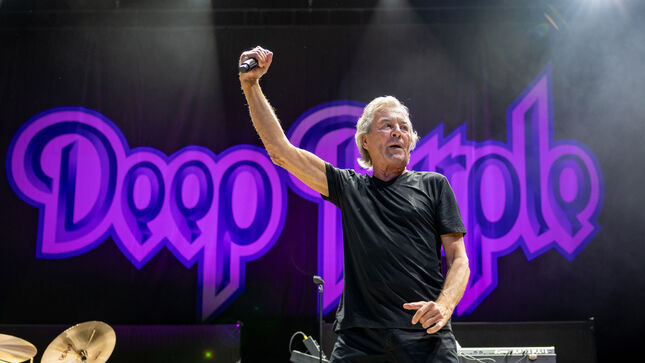 If you are one of those who believe that there’s a certain age in which we are too old for rock n’ roll, any of the current members of Deep Purple would politely ask you to hold their beers. Despite being Steve Morse the only one in the current band incarnation – also dubbed as MK VIII – who hasn’t reached the seven decades of life yet, these five veterans have plenty of gas in their tanks, enough to get the audience all amped-up and fist-pumping in the air during the initial night of their now underway 2022 tour.

The iconic Rock and Roll Hall of Fame inductees, and for many one of the three bands in the “Holy Trinity of hard rock and heavy metal,” started off the night with palpable enthusiasm and frantic energy, not like if they were playing in the beautiful indoors state-of-the-art theater of the Seminole Hard Rock Hotel & Casino Hollywood, but headlining a festival in front of dozens of thousands fans. Dressed in plain black Ian Gillan moved around quite a lot while singing, also interacting with his fellow band-members and the audience, a man who truly knows the game, how to work a crowd and make them sing along. How Ian Paice continues to beat the life out of his drum kit at the pace of songs composed more than 30 years ago is truly beyond my comprehension, yet he sat in his drum throne and punished the skins and cymbals with meticulous precision. Don Airey was not much visible behind his wall of keys, yet he had his time to shine during a brief yet revealing keyboard solo spot, which preceded the band’s iconic track “Perfect Strangers.” The two men with the strings, Roger Glover and Steve Morse were simply having a ball on stage, laughing at each other, and frequently coming close to one another for solo sections, reveling in their ability to jam. Glover’s bass cut through the mix like a knife, the notes providing a wrapping aura around Paice’s thunderous strokes, while Morse was simply put on fire. I’ve seen Steve playing live several times with different other bands, but the way his hands ran through the fretboard and bent the strings last night was certainly unique, nailing the guitar sections of songs that have defined many generations with utmost gusto and confidence.

The only thing anyone in attendance could complain about was the relatively short set-list, encompassing only 11 songs, and the lack of a bigger presence of tracks from their excellent last studio album “Whoosh!” Deep Purple might have released their debut album over fifty years ago, but they are not only still kicking, they're doing an absolutely no-frills, fine job of it, and most importantly: having fun doing it, endearingly waving the middle finger to Father Time.