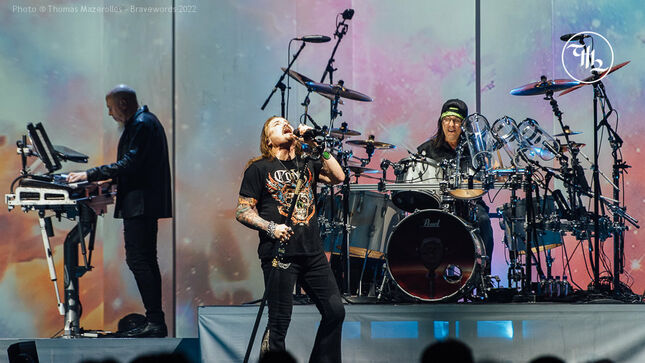 For many, this is their first concert in two years, seeing Dream Theater and Falset in Montreal at Place Bell is the perfect excuse to hang out with friends and return to what we all cherish so much, live music.

Falset is the band of Chance LaBrie, the son of James LaBrie and is opening for Dream Theater only on the four Canadian dates of this rescheduled tour. The Place Bell is about one-fourth full when the band get on stage. Their sound is modern but is lacking dynamics. Zach Copeland has a powerful voice and is very energetic on stage. He interacts with the small crowd as much as possible and gets them to light their cells during one of their songs. Their music is a mix of smooth and heavy riffs, but each time we think the band will bring it to another level, the song goes back to more conservative and generic style. Their thirty-minute set was enjoyable but they are missing a spark to bring their music to another level and get them in front of all those other generic bands. With only one album under their belt, they have plenty of time to polish their style.

By the time Dream Theater got on stage the Place Bell was about half-full, that should be almost the full capacity of the venue when considering that there are still public health restrictions for this concert. But even with the small crowd, the band got a big welcome as soon as the musicians started playing The Alien off of their most recent album. As usual their sound is astonishing and the visual background is breathtaking. As one could expect, the set list is focused on A View From The Top Of The World, their most recent album. The first thing I noticed was that Mike Mangini’s drum kit was rather small, but this is a tour intended mainly for theaters so that might be the reason behind this decision. As usual “6:00” and “Endless Sacrifice” receive a huge crowd reaction. Jordan Rudess made his way to the front of the stage with his Keytar on that last song and he rocked out with both John Petrucci and Myung. James mentioned that it was great to be back in Montreal (Laval to be precise) and that the four Canadian dates were not enough so fans should be ready for more Canadian dates in the new future. As usual, there is a lot of chemistry between the musicians but this shallow stage seemed to restrain James in his movements.

At first glance one would think that this would be a short set with only ten songs on the set list, but the last three would total almost an hour, so fans were in for a treat. “The Ministry Of Lost Souls” kicked the second half of the show and got the crowd screaming and banging their heads. It was followed by A View From The Top Of The World before ending the night with “The Count Of Tuscany”.

As expected, the night was a huge success and it was contagious to see the musicians enjoying themselves on stage. As always, a Dream Theater show is something unique and this one was no different!