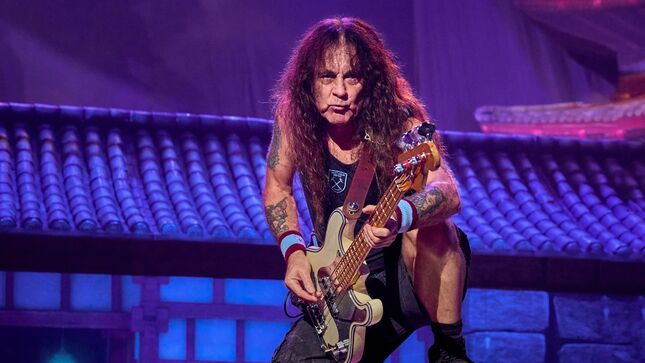 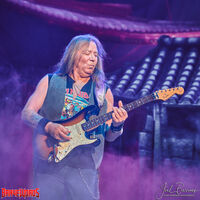 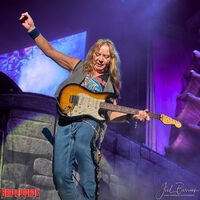 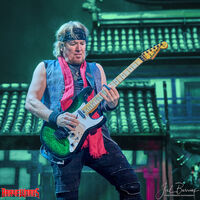 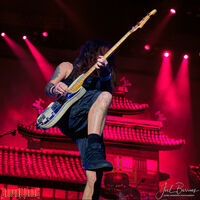 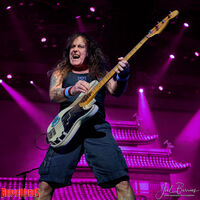 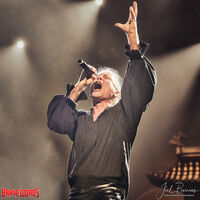 There are few names that are so consequential as to be synonymous with the very concept of heavy metal, arguably the chief contender being that of NWOBHM trailblazers turned arena masters Iron Maiden, at least if concert attendance and longevity are any indication. Known for their highly energetic performances and elaborate stage sets, they’ve circumvented a generally limited interest from mainstream media and terrestrial radio from their early 1980s origins to the present to become one of the most popular live draws in the world. Yet even more impressive than the crowd sizes that they continue to draw is the sense of camaraderie shared between Iron Maiden’s fan base, which generally makes for a reasonably safe and enjoyable experience in the pit and turns the drudgery of waiting in line for hours on end for a place near the stage into an opportunity for stimulating conversation, and the experience at the closing date of Maiden’s 2022 Legacy Of The Beast tour in Tampa, Florida was no exception. 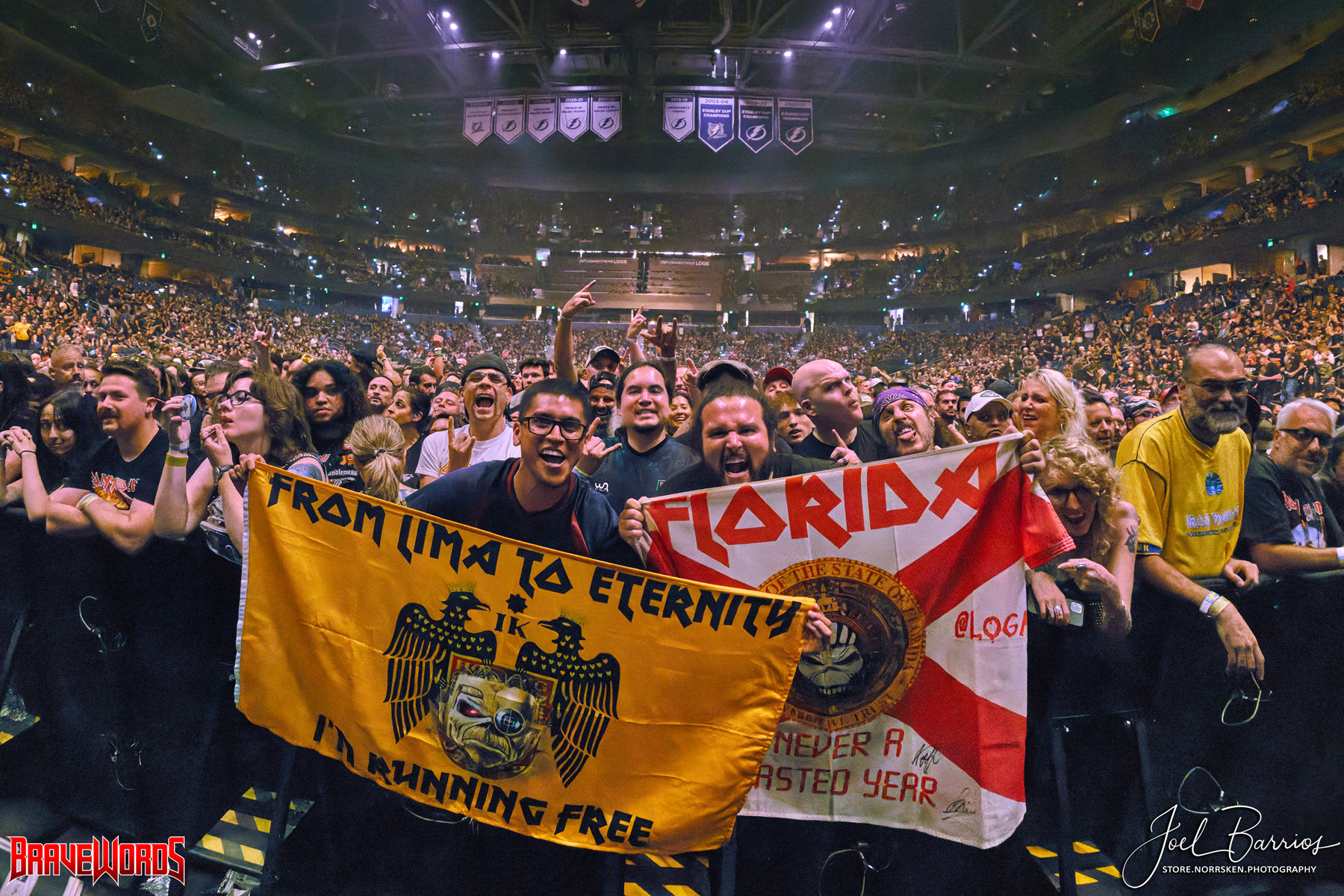 As the masses filed into their respective seats and standing spaces at the Amalie Arena, it was not long before its 12,000 plus capacity was reached and the anticipation level had been maxed out. True to their tendency of inviting unique opening acts to warm things up, Dutch symphonic metal favorites Within Temptation would take the stage to a favorable audience reaction, bucking the occasional trend of acts opening for Iron Maiden being jeered for not being the headliner. Though a considerable backline resulted in a limited amount of space for this six-person fold to roam about and work the crowd, they were able to keep things quite interesting, with vocalist Sharon Den Adel proving particular kinetic and artful as her dramatic, quasi-operatic soprano reverberated throughout the arena. Within the duration of their first song, the impressive wall of sound that they achieved and an elaborate light show seemed to make the lack of space on stage disappear and their performance alone justification for the capacity crowd being present. 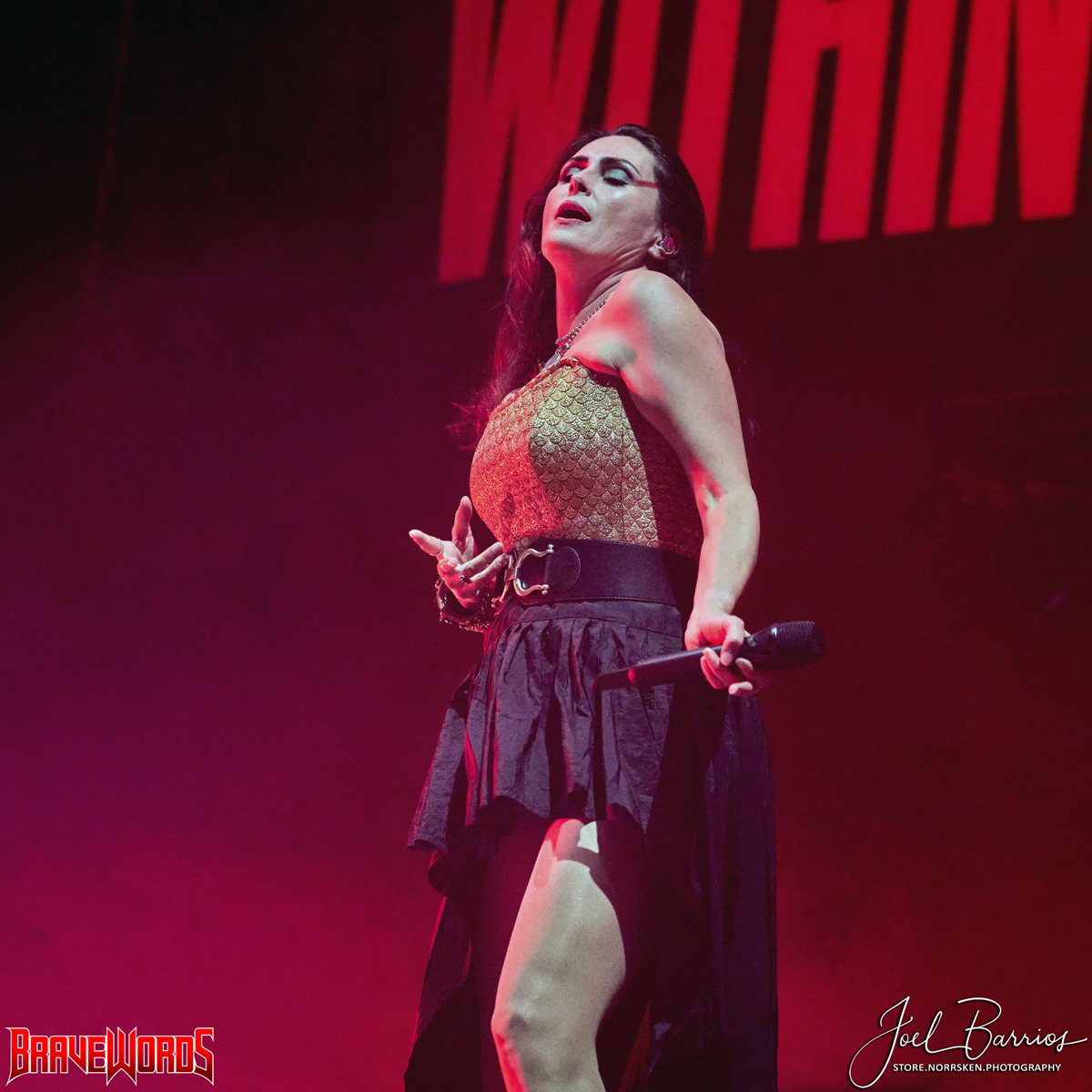 Much of what would consist of Within Temptation’s eight song set would consist of heavy-ended, modern metallic anthems from their most recent albums, placing an emphasis on banger anthems and carrying only an occasional tinge of their original gothic sound. The dual 7-string guitar assault of Robert Westerholt and Stefan Helleblad brought a formidable degree of heaviness to metallic fanfare like “Stand My Ground” and “Paradise (What About Us?)”, which elicited heavy audience participation during every chorus section. A highly poignant moment would also be had via the patriotic ode “Raise Your Banner” as Sharon wielded a Ukrainian flag in solidarity with those caught in the current conflict between said nation and Russia, while their infectious ode “In The Middle Of The Night” would see said avid impresario noting the song’s commonality with the event’s headliner’s signature sound just before its commencement. But the loudest cheers would be heard at the close of the set when olden symphonic classic “Mother Earth” rang out in all its consonant, folksy glory, marking the end of a highly engaging performance that won over even the most parochial of Maiden’s fans. 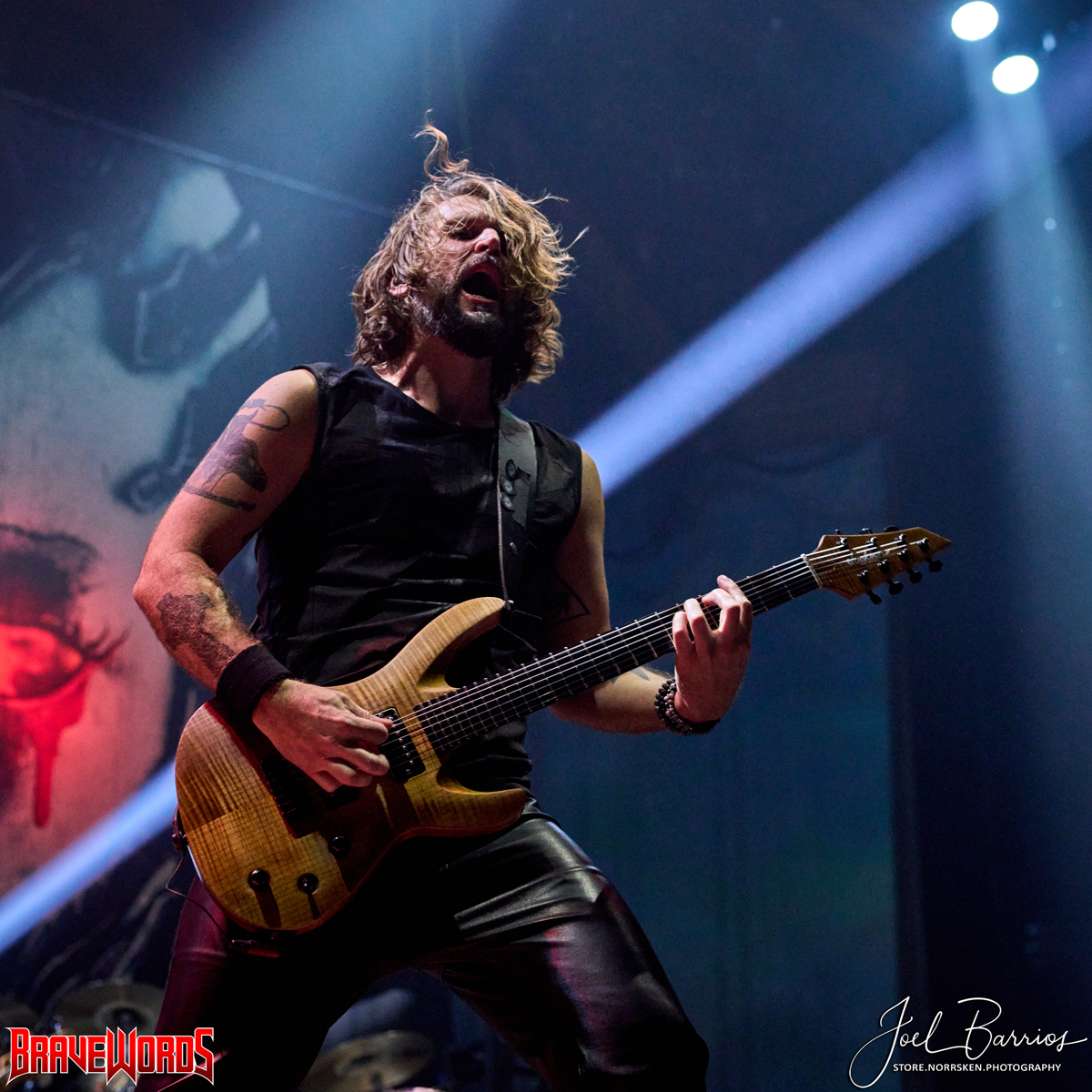 Having been sufficient revved up, the shoulder-to-shoulder thousands occupying the pit would collectively lean forward as Iron Maiden’s signature overtures boomed out of the PA system. The archaic metallic splendor of 1980 classic instrumental “Transylvania” would occupy everyone’s ears as an advertisement for the “Legacy Of The Beast”: RPG Game showcased band mascot Eddie in all his various incarnations, a testament to Maiden’s power as both a cultural phenomenon and a commercial force. Immediately afterward, the collective voice of the audience would rise to the level of an epic roar as the rocking groove of UFO’s “Doctor Doctor” rang through the air, signaling the arrival of the evening’s main event. Like clockwork, the stage seemed to instantly time warp all in congress to medieval Japan, as the six-person British fold of classic metal titans ran out to greet the crowd. With the athleticism of a youthful football star, Bruce Dickinson charged to the front in a black samurai getup and proceeded to deliver a trio of newer songs off their latest album Senjutsu amid images of pagodas and clear skies, taking an occasion during the gallop-happy banger “Stratego” to have a sword fight with a towering, samurai warrior costumed Eddie. 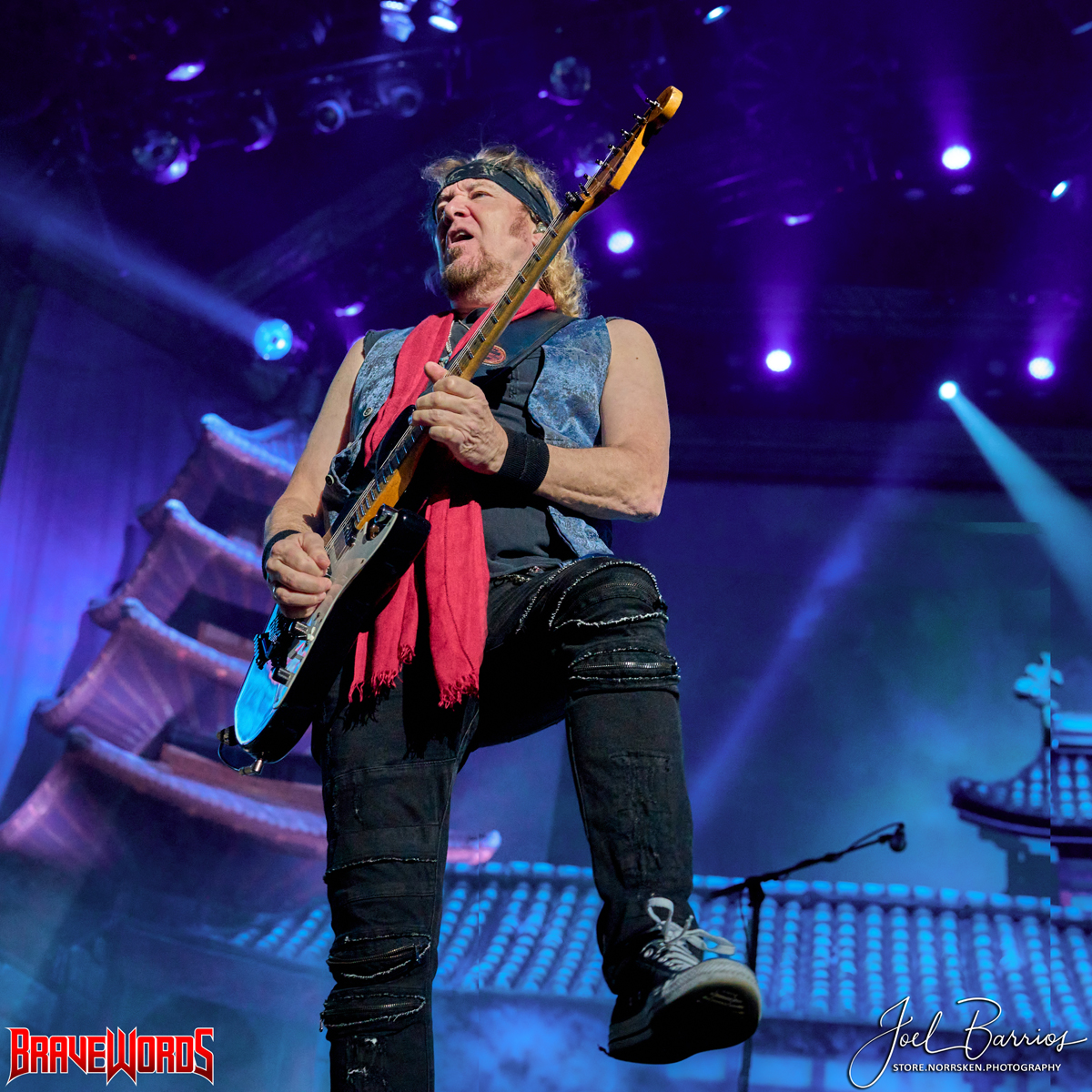 Though beginning things on a thunderous note, the fervent response of the crowd would only increase as the show progressed and more familiar tunes were revealed. With the stage set now changed to a grandiose cathedral backdrop and the arrival of 1983 classic anthem “Revelations”, the pit became chaotic as crowd-surfers and a circle pit began to appear, with the subsequent semi-balladry of “Blood Brothers” also surprisingly garnering as much moshing as it would voices chanting along to its iconic chorus. Things tapered off just enough for the front row to get a respite to enjoy the gothic scenery that would unfold with 1995 epic slough “Sign Of The Cross”, with Bruce now donning a monk’s garb as Gregorian chants and a droning intro gave way to an explosive metallic celebration, topped off by an off-the-hook lead guitar exchange by Dave Murray and Janick Gers during its apex. Other high points of the set would find Bruce’s stage performance becoming even more theatrical as he wielded a flamethrower for their rendition of “Flight Of Icarus”, roamed the stage in 19th century English attire with a lantern to the dreary melodies of “Fear Of The Dark”, and shrieked his way through the vocal gymnastics routine of signature fan favorite “The Number Of The Beast” as a massive devil looked on front the top of the stage. 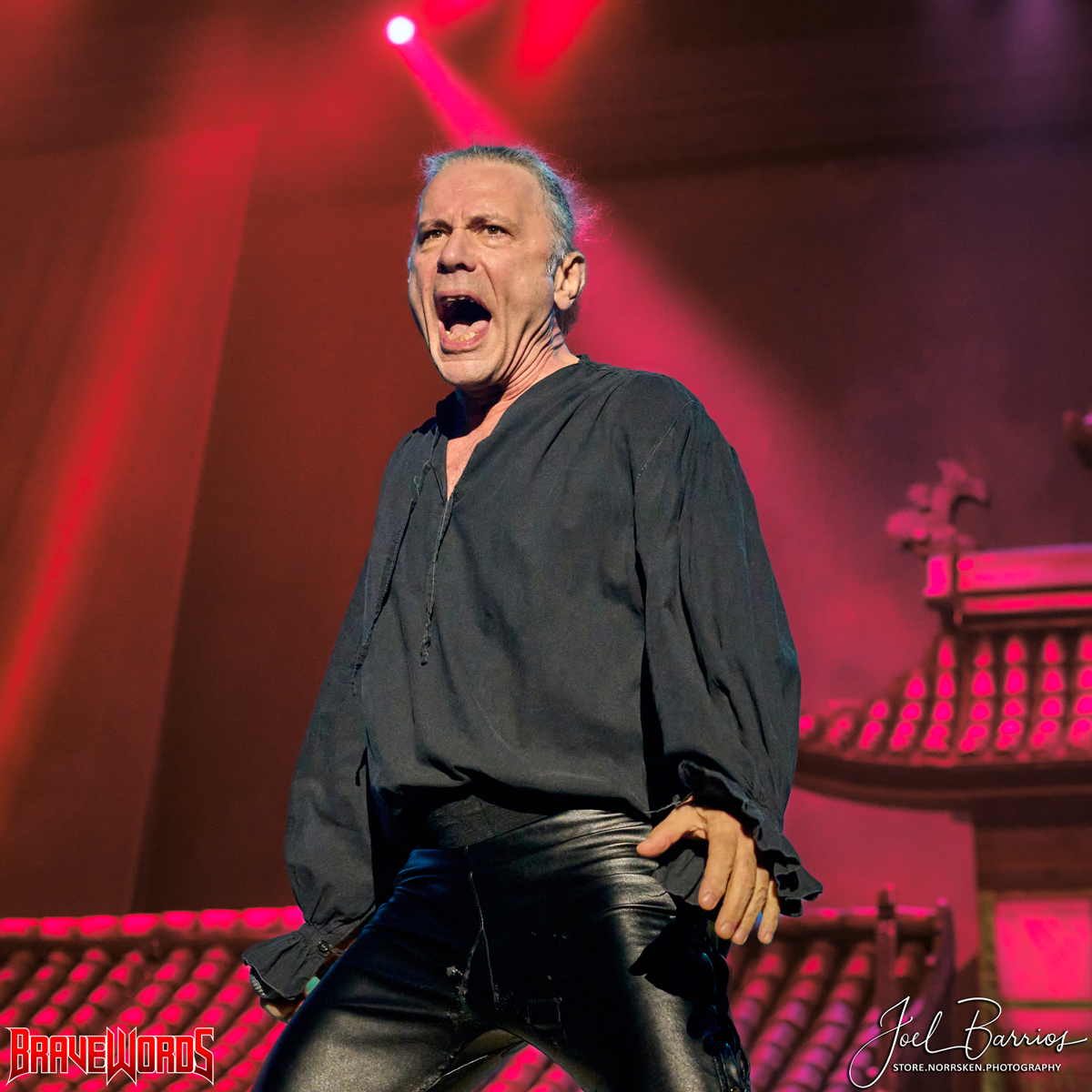 Naturally an Iron Maiden concert can’t just simply end things once, or even twice for that matter, as there would be two encore performances following a rousing rendition of their self-titled 1980 anthem “Iron Maiden”. The first would see the return of Eddie in all his 12 foot tall glory, now decked out as an early 20th century soldier to do battle with Bruce and other members of the band to the galloping stomp of “The Trooper”, followed by an inspirational performance of the band’s epic tribute to Scottish historical figure William Wallace “The Clansman”, featuring a giant banner of a blue painted Eddie and an army of undead Scottish warriors for added atmosphere. Topping things off was a brilliant go through of crowd favorite “Run To The Hills”, with drummer Nicko McBrain showcasing an amazing level of energy and endurance from behind the kit at the ripe old age of 70. Yet it would be the second encore, lead off by the rousing wartime speech of Winston Churchill and topped off with a riveting performance of “Aces High”, that would seal the deal as a massive fighter jet balloon flew above the stage. 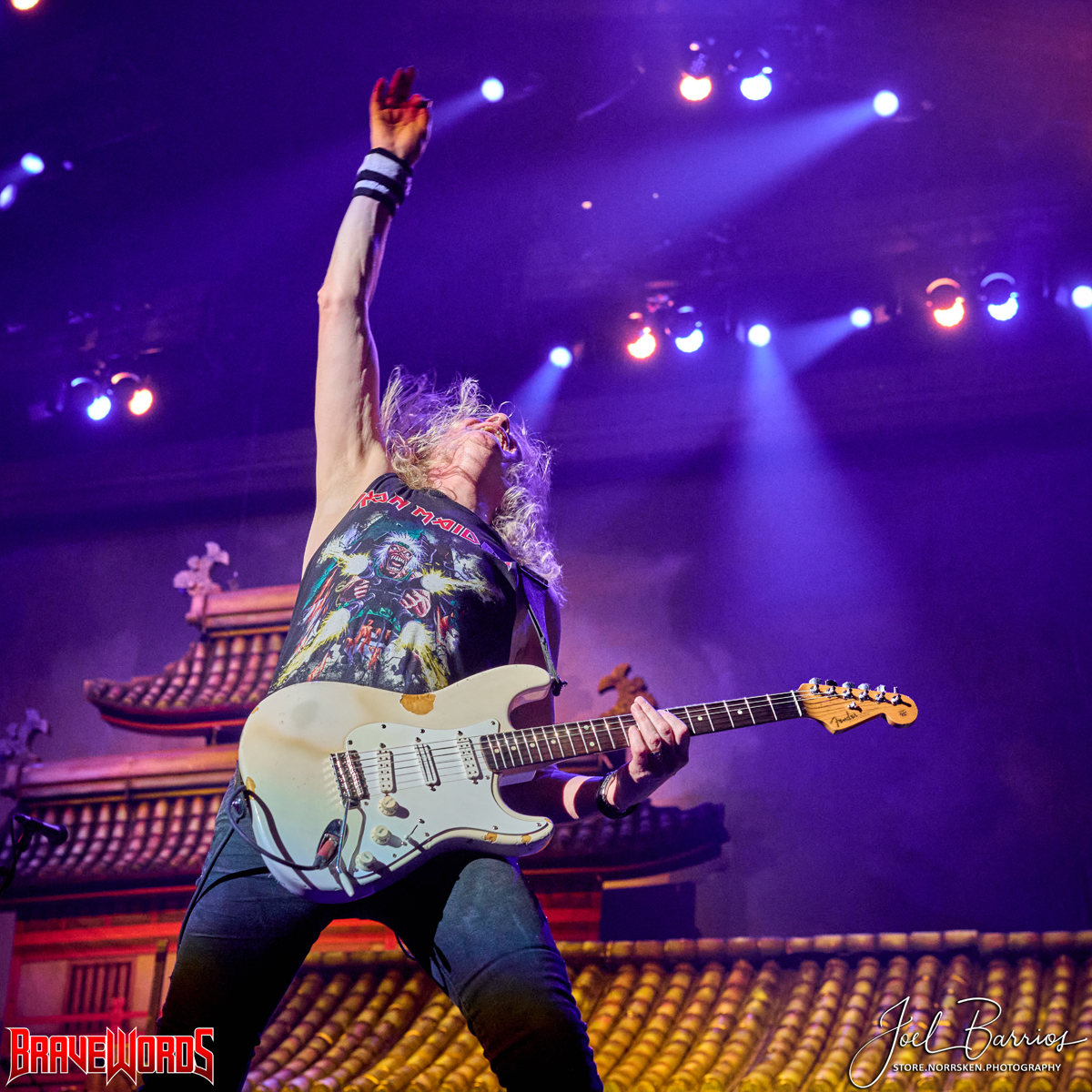 Now sufficiently covered in sweat and physically spent, the crowd would proceed to disperse to the whimsical ode from Monty Python’s Life Of Brian “Always Look On The Brighter Side Of Life”. Though the thoughts of each individual attendee were likely still enthralled by the spectacle of elaborate stage sets and wildly complex musical arrangements, one could not help but have been astonished at the animated movement and performance competency of a band that had not a member younger than the age of 64 in its ranks. Perhaps the highlight of the hour was how an aging Bruce Dickinson was still able to raise his voice to the proverbial stratosphere, turning in one of the best performances in many years, perhaps a credit to the 3-year rest period that bang had enjoyed prior to this tour. It stands as a reminder that not only is metal still alive and kicking, but one of its originals still has much to say on the matter, and is no doubt bound to say quite a bit more in the coming years. 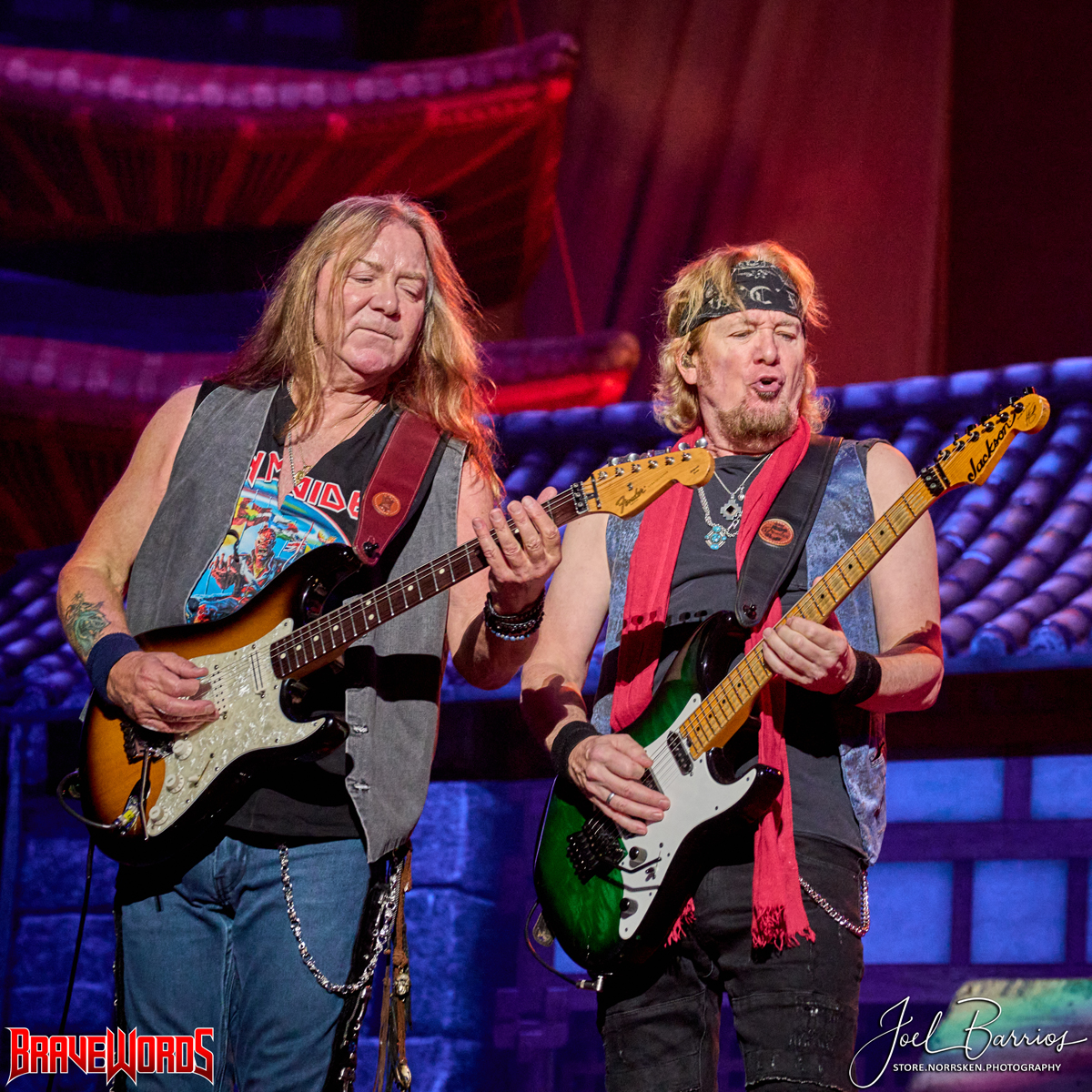