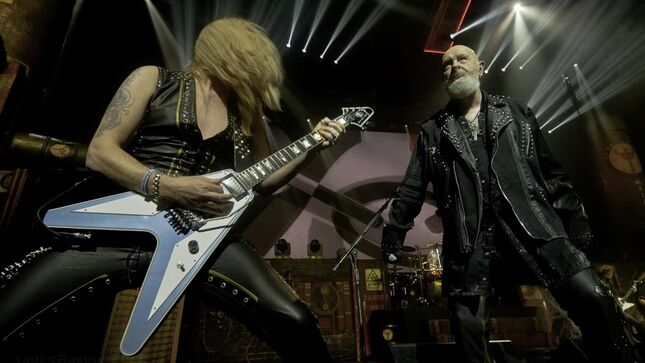 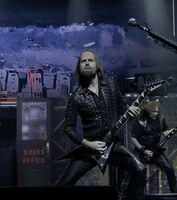 Judas Priest and Queensrÿche entered the sold out Andrew Brady Center in Cincinnati on October 24. Queensrÿche opens to Pantera’s “Walk”, which, having seen Queensrÿche four times now with Todd La Torre at the helm, was something of a surprise, though the sold out crowd sang along in appreciation. Queensrÿche stayed close to the more rock oriented part of their catalog. They started in high gear with “Queen Of The Reich”, and moved forward one album with “Warning”, “En Force”, and “NM 156”.

It’s not a secret they have a new album out, which I’ve not yet heard as two of my local record stores have been sold out, playing two new songs: “Behind The Walls” and “In Extremis”. Not yet familiar with the new material, I will say it blends in well with their classics. A pleasant surprise was “Screaming In Digital” off Rage For Order. Based upon online comments, I still sense a bit of a civil war among Queensrÿche fans. Having seen them on the American Soldier tour, at which I witnessed little interaction and noticeable disinterest on stage, and then four times since, the band is clearly burning on all cylinders. Time to get on the train if you are still at the station.

Then it was the mighty Judas Priest. Priest ended my heavy metal virginity in 1982 with the purchase of Point Of Entry, and I’ve been a devout parishioner of the church of Judas Priest since. Unless you’ve been living under a rock, or reading lesser publications, you know this is their 50th Anniversary tour. I’ve not anticipated a Priest show this much since they played British Steel in its entirety.

“War Pigs” opens the services. The Priest cross lays level across and five feet above the stage, then slowly raises with the opening riff of “The Hellion”, and is in full lighted majesty in the sky as the band cranks into high gear with “Electric Eye”, followed by “Riding On The Wind”, and “You’ve Got Another Thing Comin’”.

I can’t say anything about Rob Halford that has not already been said. To say he sounded great would be an understatement. He mentioned between songs that he had a cold, which is why he was drinking a lot of water during the show. During a break, Scott Travis said exactly what I was thinking, which is that I would be so lucky to sing like Halford with a cold. He could have fooled me. Somewhat unusually, Halford spends most of his time on stage acknowledging the fans in the upper reaches of the venue. A real class act. I even caught Ian Hill smiling more than a few times.

There are a certain few tunes that you know you are going to hear at a Priest show – “Breaking The Law”, “Hell Bent For Leather”, and “Living After Midnight”, but, not having scouted the set list, they played some much appreciated deep cuts, including “Jawbreaker” off Defenders Of The Faith, “Judas Rising” off Angel Of Retribution, and “Between The Hammer And The Anvil” off Painkiller. They played some not so deep cuts, but tunes they don’t always play such as “Screaming For Vengeance” and “Green Manalishi”. Nice to see they did not ignore Redeemer Of Souls with “Halls Of Valhalla”, and Firepower with “Never The Heroes” and the title track.

However, for this veteran of the Priest congregation, hearing “Genocide” off Sand Wings Of Destiny was a real blast, and amazing that Halford can pull it off almost 50 years later. The second real treat was “Steeler” from British Steel. This tune presents a great opportunity for Faulkner and Sneap to trade licks bouncing off the killer riff. “Judas Rising” is not so bad. And third, “Beyond The Realms Of Death”, complete with lighted disco ball highlighting the venue, and the subject matter.

Other than the deeper cuts, the biggest difference was Andy Sneap. When I saw them in 2018, he was newly minted, and stayed in his particular zone. On this night, he was much more involved with the crowd, and much more upfront. He seems to have found his groove with the band.

Minor Quibbles? I’d like to have heard something off Rocka Rolla. So, we have the mighty Priest giving us a celebration of their half century kicking our asses, still relevant as hell, a varied representation of their catalog, sounding tight on stage. Get it while you can.