JUNKYARD - Nobody Rules These Streams At Night Like The Acoustic Punks! 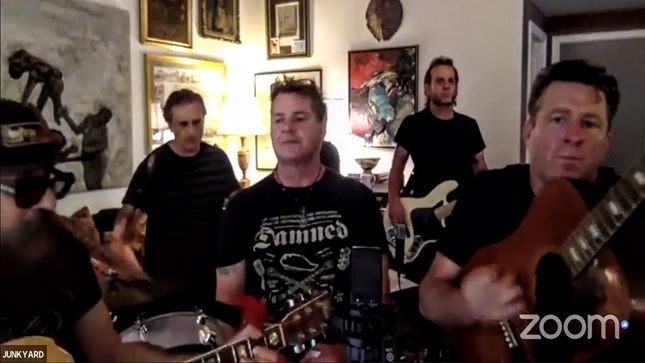 Although their '89 eponymous debut rode the tail end of the hair band era, Junkyard were always punks, who grew out their greasy hair (and in the case of lead screamer Dave Roach, dyed it blond), with dirt under their finger nails and stench of oil/gasoline and last night's cheap libations permeating their non-designer, torn denim. A far cry from the glitz, eyeliner and tinsel of the Sunset Strip. Unlike many of their MTV contemporaries, thirty years later, they're basically the same (albeit, in some cases, detoxed) cats, playing in bars for the love of music, not the 80s perks (or was that Percs, as in Percocet?). So, with Covid putting the kibosh on clubbing, Junkyard offered fans the chance to hear some deep cuts (as well as the usual hits) acoustically. Band promised 10 songs, "Some stuff you've never heard before. Some stuff we've never played before". However, before that could happen, there were technical (audio) issues that delayed the performance by 90 minutes from its scheduled start. Onstage, or on the web, it's always something! Felt sorry for the overseas fans: Europeans staying up well past midnight, to get a rare glimpse of the band live, while those in the Far East had to awaken at sunrise!.

Not sure it was always planned as such, but turned into a lo-fi event, via Zoom, from someone's living room (complete with couch and paintings/prints on the walls). Unfortunately, small sound/image quality glitches arose, not to mention the superimposed Zoom logo and annoying stream of heart and thumbs up emojis bubbling up, in front of guitarist Tim Mosher. From the opening "My Life Sentence", the six-string tandem (Roach, throwing the horns, in The Damned t-shirt, sandwiched between Mosher and the bushy mustachio Jimmy James) played guitars vertically, close to the screen. The guesting electric piano REALLY aided these renditions, beginning with "Misery Loves Company", backing vocals by Mosher (who helps out through the set). The selections are almost exclusively from the aforementioned debut, follow-up Sixes, Sevens & Nines and High Water. The countrified Rolling Stones sound (think "Angie" meets "Wild Horses") of "Slippin' Away" is up next. Bluegrass foundation of "Faded" sees (the sober) Roach adopt a bottle of water as a prop, for a song that included lyrics about opening a bottle with your teeth (old habits die hard).

"Simple Man" is followed by a track heretofore NEVER performed live, "All Or Nuthin", again more of a 70s Stones vibe. While the guys are playing, Loren Molinare ( guitarist for frequent tour partner, Little Caesar) sends  a message across the scrolling comments. How cool is that? "Styrofoam Cup" gives way to "Hands Off". The original version was basically Roach spoken word, atop minimal accompaniment, So it works well here. "Get your hands off my throat, I can't breathe," takes on a whole new meaning in 2020. Following the pedestrian track, Roach declares, "Let's play something uplifting," Cue "Blooze", the ultimate ode to drinking! The long-sober Roach throws horns with each hand. Not sure about your "habit"? Compare to the lyrics of "Blooze". Enough said! Given the pre-described, people were (initially) concerned, when song #10 was "Clean The Dirt". While there is nothing wrong with this song, the fact the clock had struck 10 (supposedly the "end") and no "Hollywood"... the Internet was abuzz. No problem! Roach joked (web trolls, it was in humor!), "Make us richer than we already are!" As if to drive home the point, all his band mates laughed out loud!  Their best known/signature MTV video track closed the show (although the guys came back for an auction of personal affects that benefited band/fans alike).

This is a hard working, 80s band (minus the era's hype/ hyperbole) that continues to turn out good music and is worthy of your investigation/support.