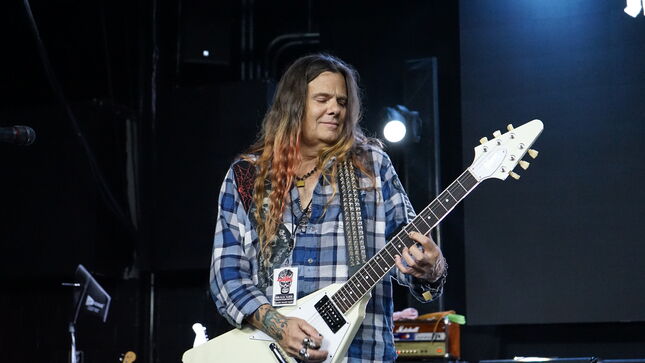 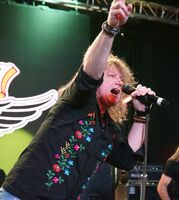 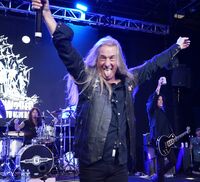 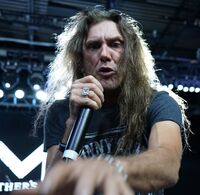 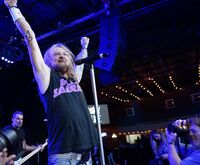 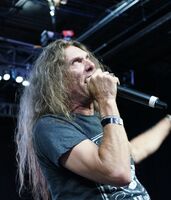 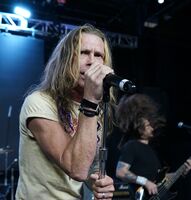 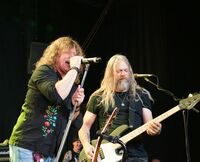 The Masquerade ‘80s rock festival, "A True Rock ‘n’ Roll Experience", was supposed to get its start in 2020, rescheduled for 2021 in October to coincide with Halloween, but not as a costume party. But as we all know due to Covid and restrictions was postponed again until July 28,29,30 2022. The organizers were kind enough to give me an all access pass so while socializing was able to speak with a couple people who were working the show, and photographers, to get some background on this new festival.

The 2,300 arena in Philly, Pennsylvania, is usually used for professional wrestling shows, and music events. It is a great venue and layout, main entrance has a dining area and bar with bathrooms, back area food and room for vendors with access to the backstage. To the left is the stage and floor for general admission with a section for seating. The festival and several of the band's had shirts and merch. The organizers (BLE Entertainment) expressed they would like to put on another festival next year in 2023, hopefully under the same name, but maybe slightly modified to distinguish it from other masquerade events. As of now information on the festival can be found at the BLE Facebook page, or the Masquerade Madness group page. 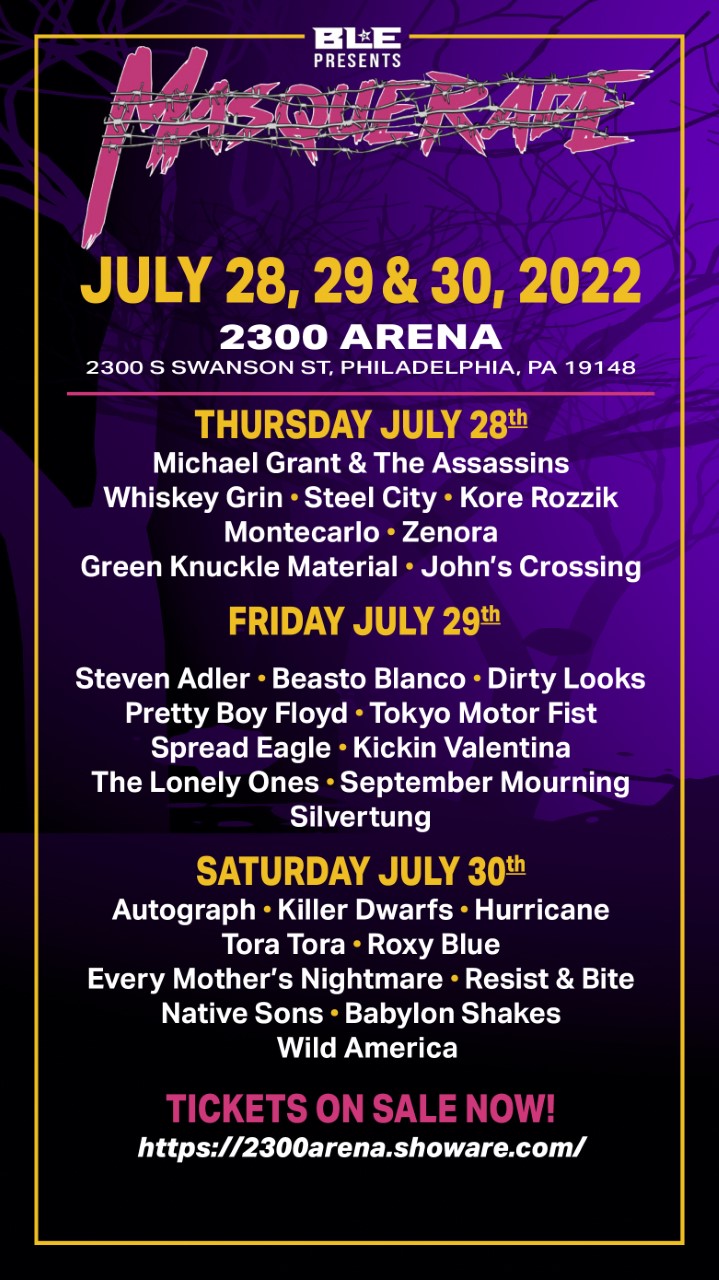 Over the course of three days, Masquerade offered a lineup for those who would go to M3 and the Monsters of Rock cruise. Among other local and up and coming names, Thursday was supposed to include ex-L.A. Guns guitarist Michael Grant & The Assassins as headliners but they had to cancel. Friday was Steven Adler, Beasto Blanco, Dirty Looks, Pretty Boy Floyd, Spread Eagle, and Tokyo Motor Fist. Saturday, the day I went, featured the new band from ex-Tesla guitarist Tommy Skeoch, Resist & Bite, Every Mothers Nightmare, Roxy Blue, Tora Tora, Killer Dwarfs, and Autograph. Hurricane were also supposed to play Saturday, but had to cancel. Too bad, really wanted to see them. Wild America were also scheduled to open Saturday but canceled which led to a small shuffle of the lineup, times, and some delays.

Resist & Bite went on around 5, played almost 45 minutes; Tommy's new band is that Tesla type of hard rock, and even his singer has a little Jeff Keith tone and swagger. Crowd really dug them, good songs from the self-titled album, Skeoch laying down the riffs and leads. And yes, they played two from Tesla, "Modern Day Cowboy" and "Heaven's Trail", both hard rockin’ with a lot of excitement in the crowd. Steel City were next, with the singer and drummer from Cold Sweat the early ‘90s band that featured Marc Ferrari (Keel). Never heard them before, good solid ‘80s hard rock, metal at times. Singer is great, still has the voice.

Memphis based Every Mothers Nightmare has only one original member, singer Rick Ruhl. Never saw them back in the day. EMN had that grittier guitar and vocal, like Spread Eagle, Wildside, Dangerous Toys, Love/Hate. Ruhl worked the crowd, lots of energy, all over the stage. He said the band are working on new music. You remember the two MTV songs, "Walls Come Down" and "Love Can Make You Blind". Also from Tennessee, Roxy Blue were like a Van Halen spinoff with their debut Want Some in 1992. Although tonight they didn't play the single "Rob The Cradle". Down to three original members, singer Todd Poole who also play some rhythm guitar for a couple songs, Josh Weil on bass, and Scott Tramwell on drums who I don't think performed at the show. Playing to a couple hundred people, Poole worked the crowd  and was always out front like there were a couple thousand.

Was looking forward to Tora Tora, didn't get to see them in the early ‘90s. Another Memphis native, the debut Surprise Attack was released in 1989, and still original members are in the band with singer/acoustic guitar Anthony Corder, Keith Douglas on guitar, Patrick Francis on bass (who didn't make this show), and drummer John Patterson. The set was of course focused on that debut, singles "Walkin Shoes" and "Phantom Rider" had the whole place singing. I also got to chat with Anthony after the show and he was telling me about how they got their start on east coast at L'Amour rock club in Brooklyn because they were with Loud and Proud Ent. Tora Tora use to rehearse at the club during the days, as did White Lion, Overkill, and Tyketto. They are also working on new music.

Never saw Canadians Killer Dwarfs in the ‘80s. They were one of the opening acts for Iron Maiden on the Seventh Son tour, but here in New Jersey we got Ace Frehley's Comet. Singer Russ 'Dwarf' Graham and Darrell Millar the only original members, with Gerry Finn on guitar 1991- present, Johnny Fenton on bass. By the time they went on it was 11, they had to cut several songs from the set. But of course "Stand Tall", "Keep That Spirit Alive", and "Dirty Weapons" remained. Too bad because this is the 40 Still Standing Tall tour. Russ Dwarf is a maniac on stage, running around, twisting and turning in ways that sometimes don't even fit the song. But hey, it’s his thing. He would often run back and forth up and down stage interacting a lot with the people. Didn't stay for Autograph, had that trip back to Jersey, but heard good things. I have seen them before, last time in 2014 with Slaughter. But the current lineup has no original members, guitarist Steve Lynch left in 2019 replaced by Jimi Bell (House of Lords), and singer Steve Plunkett did not come back when they reformed in 2013. So they soldier on keeping the music alive.

A modest start for this year, curious if this festival returns. With a new modified name? Will it be all legacy bands, or will they include some bands from the new generation like H.E.A.T., Crazy Lixx, Bloody Heels, Reckless Love, Santa Cruz, or Girish And The Chronicles?