Looking back, seems spring showers not only brought blossoming flowers, but apparently the concert season was well in earnest too, at least in Northeast Ohio, where I resided at the time. Initially a college DJ, soon spun off to writing gigs in Scene, a local weekly entertainment freebie and later found myself on the ground floor of the burgeoning Alternative Press. Here's what was happening the first week of May: 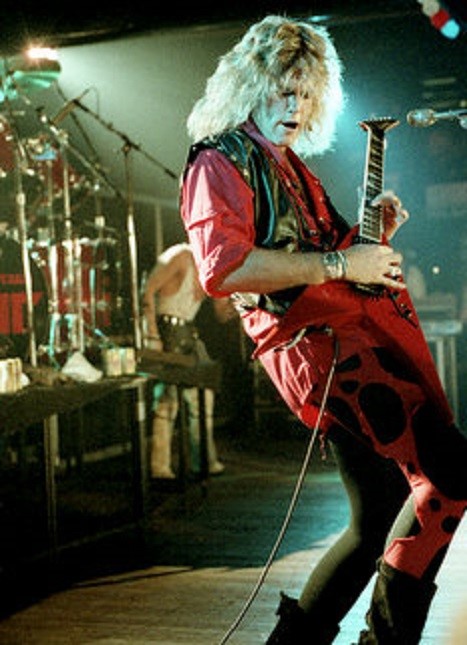 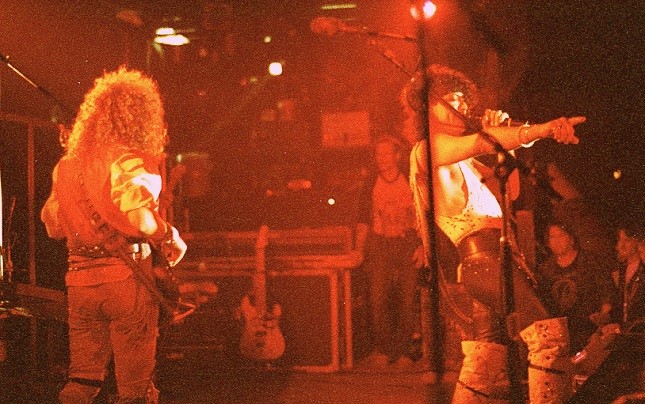 May 7, 1984 - Ratt/Heavy Pettin' - Cleveland Agora
Club show, prior to the "explosion" of fame, so not that well attended, so much so I was able to stand atop a chair at the front of the stage to take photos. One of the last shows I shot, before putting the camera down for more than a decade. Afterwards, a few of us went to the infamous Swingos hotel (famed for rock ‘n’ roll parties and hook-ups), where one of the fans had rented a room. No bands though.

May 5, 1988 – Guns N’ Roses /Zodiac Mindwarp/U.D.O. -  Music Hall Cleveland
Spent much of the afternoon on the GN’R tour bus, interviewing Slash, for what was to be the massive cover story for AP. Axl Rose was asleep in the front seat, next to the driver, while the guitarist and I commandeered the back lounge, for the chinwag. Living the part, he drank Night Train, straight from the bottle as we talked. It was my first "real" assignment for the mag, having previously allowed me to do pieces on "heavier" bands that I specifically chose (as opposed to now being asked) to cover. Plenty of time to kill, so also sat in on the photo shoot (again for the cover). Saw all three acts, including some Gunners' stuff off the Live Like A Suicide EP, but honestly, more enamored with my third row seats for U.D.O.'s performance (on tour for his solo debut)!

May 1, 1989 - Helloween/Exodus/Anthrax - Syria Mosque, Pittsburgh, PA
Drove a couple of hours to hang out with my brother (a student at University of Pittsburgh), but wrangled a pair of tickets to see Helloween (who were not stopping in Cleveland on said tour). Was not my first time inside the ornate Syria Mosque (odd layout and decor for a metal show: Those that had an eerie feeling with painting staring from the walls of the old Powermad festival, at the Tall Cedars venue, this was WAY more intimidating!) as I saw Dio there, on the Holy Diver tour (Humble Pie's Steve Marriott opening, as a solo act). Anyway, after the show, wormed my way backstage and talked to the Germans, let them know that there were Americans interested in what they were doing. Have never forgotten an animated Markus Grosskopf, "Keeper, Keeper, Keeper! I'm tired of only hearing about Keeper. Next album, definitely no Keeper!!" And we know what happened...

May 2, 1989 – Destruction - Phantasy Theater Lakewood, OH
Rock ‘n’ roll weekend! Must have hightailed it back to Cleveland, as the next night, it was the old venerable Phantasy Theater (not the upstairs nightclub, with the sailboat, right in the middle of the room (mixing desk & lights were on ship's deck), for more German imports, Destruction, who were supporting Cro-Mags, a NY hardcore outfit. Was popular at the time, especially back on the East Coast, to see Agnostic Front or Crumbsuckers partnered with Overkill or touring metal acts, on the same bill. The "crossover" tag was all the rage and this was the first big nationwide tour I was aware of, attempting a similar aesthetic. Over the years, Schmier has become a friend (stayed at his place in Freiburg, hang out on tour, or overseas), but he's changed from the curly haired, blonde "poodle," bangs down to his eyes of that era. Then again, most have us have "progressed" since then. This evening has been forever preserved on the global map accompanying Destruction's latest live offering, Born To Thrash, documenting fans' initial encounter with one of the German Big 4.