THE BLACK CROWES – The Robinson Brothers and Co. Rock Like Its 1969 In Hollywood, Florida 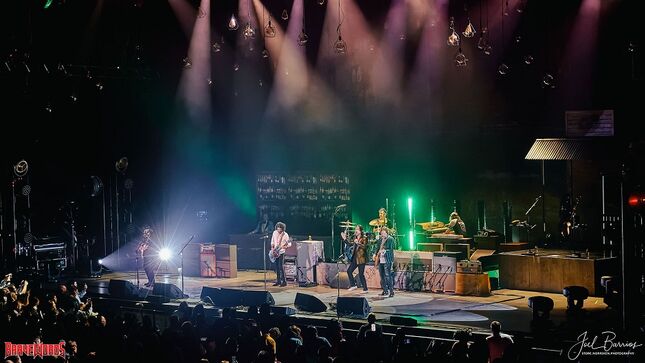 For those who grew up in the ‘90s, there was an odd paradox of noting that bands like The Black Crowes were a throwback to a bygone era, yet at the same time the notion of them ever becoming a classic rock band in the proper sense was a prospect for some far-off future date. Fast forward a little over 30 years to the day that said retro-rock trustees from the Atlanta area unleashed their debut LP “Shake Your Money Maker” upon the masses and it seems that they’ve become just that, yet with the added bonus of the band only showing their age on the exterior. Now donning facial hair that is almost eerily similar to the massive beards sported by The Beatles during the twilight years of their 10-year run, these middle-aged rockers who brought back the vintage sound of the good old days to the cynical trustees of the grunge era descended upon Hollywood, Florida to showcase how little time has impacted their proficiency and zeal for the art.

In a time where many have not only been saying that rock is dead, but that live music as an art form had been in a state of utter limbo for a roughly two years, one might argue that the odds were stacked against this veteran fold. But a packed venue situating around 4,000 avid rock fanatics on an evening that coincided with a nearby Tears For Fears concert told a very different story where an old rock standard can carry the day simply by showing up. Indeed, the fact that only the Robinson brothers remained of the original lineup with longtime bassist since 1997 Sven Pipien in tow seemed to be of virtually no consequence to the throngs of cheering spectators as they took the stage with a group of additional live musicians to fill out the arrangement. Changing musical trends were as much of a factor for this band on June 11th as they were back in 1990 when their journey as a major player in the music scene began, which is to say not at all, as classics of this mold exist independent of the times.

The nostalgia factor reached a fever pitch almost immediately as the air was filled with the sounds of 32 years past, and then some. Partying like it was 1990, the assembly of concertgoers could not help but dance and sing along as one well known tune after another commenced, rounding out the entirety of The Black Crowes’ famed debut album. The days when terrestrial rock radio ruled the world seemed to come raging back as familiar hits such as their rendition of Otis Redding’s “Hard to Handle” blared from the stage with Chris Robinson’s free flowing gesticulations and soulful swagger leading the proverbial charge. Similarly jubilant spectacles from performer and audience alike went along with the hard rocking goodness of well known bangers “Twice As Hard” and “Jealous Again”, while a respectable response was observed to deeper tracks like “Struttin’ Blues” and “Could I’ve Been So Blind”, to speak nothing for the sea of voices chanting along to the refrain of ballad and radio favorite “She Talks To Angels”.

Following the raucous blend of impact-based guitar rocking and gospel-tinged southern charm that recounted the opus that ushered in this musical institution’s illustrious career, a string of equally familiar bangers from a little later in their career followed. The country-like smoothness of the semi-ballad jam “Wiser Time” off 1994’s “Amorica” proved a welcome addition to the festivities, as was the band’s rendition of blues classic and The Undisputed Truth tune “Papa Was A Rollin’ Stone” from their most recent EP 1972, with Chris rocking the harmonica something fierce. But when push came to shove, the remainder of this crackerjack performance was steeped in this fold’s seminal sophomore opus “The Southern Harmony And Musical Companion.” Crowd response was off the hook for classic blues rock staples “Sting Me” and “Thorn In My Pride”, but what truly brought the house down and gave the masses a sendoff for the ages was their pre-encore closer “Remedy”, which cut through the air as brilliantly in 2022 as it did in 1992.

Elation was the only proper, nay the only possible response to such a glorious occasion, and it still echoes through the air above Hollywood long after the show had ended. For all the changes that have rocked the music scene (no pun intended) over the past three decades, it’s a welcome notion that some things never change, and almost miraculously enough that includes the power and vitality of Chris Robinson’s soulful pipes. It’s extremely difficult to resist the temptation to make an analogy to things aging like a fine wine, but there is definitely something at play that has kept the man’s voice from succumbing to the ravages of years upon years of constant touring from smoke-filled clubs to packed stadiums. With the deserted wastelands of the early 2020s lockdown culture now all but entirely in the rearview, the time rock out appears alive and well, and maybe with some additional touring and studio work, these adherents of the old ways may inspire a new generation of classic rockers to rise from the dance pop ashes and light the flame anew. The Black Crowes are undoubtedly one of our hard rock national treasures.