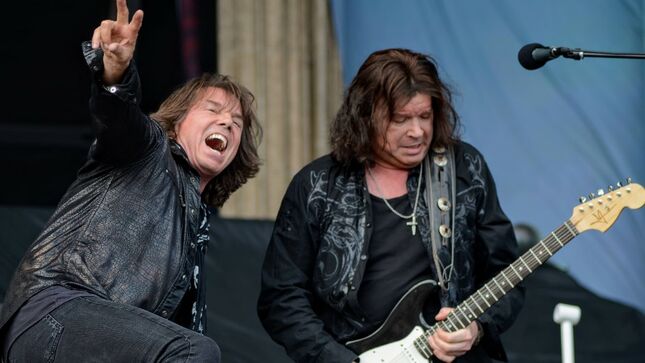 Here's a quick look at the first (of three) days at Tons Of Rock, a full report to follow. After a pandemic induced hiatus, the Ekebergsletta grounds were bustling with fans and musicians fed up with quarantines and travel restrictions. A wide ranging program, under the hard music umbrella, on a trio of stages, virtually something for everyone, from Sum 41, Baroness and Mastodon, to those catering more to BraveWords' interests, including those featured here: Gene Hoglan and Steve DiGiorgio reviving Death classics across the catalog as Death To All, UK exports Bullet For My Valentine, Enslaved relegated to the "smaller" tent stage (still had capacity for 8000!) due to schedule conflict, Europe, Hypocrisy, and Iron Maiden. Know the 2-year layoff will cause glitches in the concert/touring world, many faces and names have changed. That said, the usually unflappable Maiden camp goofed, opting to only allow "national media" photo access. So there are probably more metalheads reading these words (in English, throughout Europe, the Americas, and Asia) than any source within a country with a population of 5 million people. Regardless of the oversight/slight, will still feature the Brits prominently, in my final recap.

Strange, seeing Death To All in bright sun, however the tracks were as hot as the temperature. The bassist did much of the talking, which wasn't a lot. All eras of Chuck Schuldiner's career were included, from the brutal, early days of "Zombie Ritual" to the technical wizardry of stuff like "The Philosopher" and glorious "Crystal Mountain". On the main stage, Bullet For My Valentine did their best to win over a Thursday afternoon crowd. The heavier side of things, like "Scream Aim Fire" did the trick. Europe, on an off-day from the Whitesnake tour (although Joey Tempest did include a snippet of "Here I Go Again" within "Superstitious"), are bona fide headliners in their own right. Tempest added both acoustic and electric guitars to John Norum's Swedish guitar god antics (guitar chord whipping across the strings) as they offered classics like "Carrie", "Cherokee" and the ubiquitous "Final Countdown" finale, which not only brought the old-timers to their feet, but cell phones out, to film the song. The gathering for shuffled Enslaved time slot (unannounced, but on the web site) might have been smaller than if they'd played a few hours earlier (as scheduled), but those that were in attendance were treated to a fierce performance from Grutle Kjellson (bass/vox) and guitarist Ice Dale. Had to leave Hypocrisy early (to wait in line for Maiden photo-op that never materialized), but Peter Tagtgren's alien obsessed musician assassins were cooking, on the likes of "Worship" opener and "Fire In The Sky". More in-depth coverage, to follow.