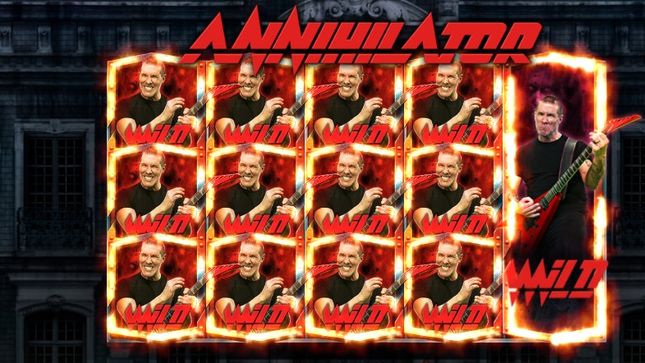 Are you a rock music aficionado? And do you love playing the slots? If so, then you’ll be interested to note that Betiton is showcasing a new musical slot game based on the music by the band, Annihilator.

Consequently, let’s consider the merits of adding music to casino games, the importance of using rock and metal in casino games, as well as a few details about the new slot, Annihilator.

Who/what is Annihilator and what is thrash metal?

Both these questions, who is Anihilator and what is thrash metal, are valid and deserve a considered answer.

And, thrash metal, as defined by the urbandictionary.com, is a “subgenre of heavy metal music, one of the extreme metal subgenres that is characterized by high speed riffing and aggression.” Songs in this genre “use fast, percussive and low-register guitar riffs, overlaid with shredding-style lead work.”

Finally, some of the world’s most popular thrash metal bands include Metallica, Anthrax, Slayer, and Megadeath.

The importance of Rock/Metal music in casino games

Rock music, especially the different metal genres, is an ideal basis on which to build musical slot games. It is certainly not boring and relaxing, but it adds rhythm and emotion. That's why Betiton (website) offers music slots on their online casino so that players have a unique experience when they play.

Research has shown that music influences mood, mental clarity, and emotion. And, different music has a different effect on people. For example, driving music or fast rhythmic music elevates the heart rate, and gets feet tapping. It is used to create tension in film scenes and in casino games.

As your heart rate goes up, and you get involved in the game you are playing, your brain releases endorphins, the feel-good brain chemical. Consequently, losing turns into the determination to continue playing to turn losses into wins. And, winning increases the happiness endorphins, or brain chemicals, dopamine and serotonin which, in turn, spurs you on to win more games.

As a consequence of the explanation of how music influences the release of endorphins, it is apparent how rock music, especially metal, is used in slot games like Annihilator to drive excitement and interest. Its primary aim is to keep the gamer’s attention and to provide a positive gaming experience to gamblers, even if they lose.

This slot game developed and released by Play'n Go is a tribute to the band, Annihilator.  The game developer featured some of Annihilator’s iconic tunes, including a track from their latest album, Ballistic. The band leader and the third-greatest metal guitartist, Jeff Waters, appears in the game in an animated form, shredding his guitar and setting the scene alight with his spectacular riffs and musical prowess.

As a result, to experience the excitement provided by the driving music, with some of the best guitar shredding in the industry, click here to play Annihilator slot.