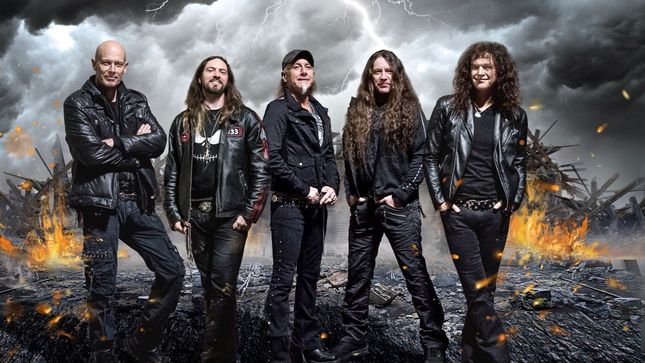 On November 23rd, Accept will release their new masterpiece, Symphonic Terror - Live At Wacken 2017, via Nuclear Blast - which means that it’s not long until the impressive images and the bombastic sound of this rousing fusion of metal plus a symphonic orchestra will be available all around the world.

"We are so glad we recorded this unique show - this very special concert at Wacken will always stay in our memories“, states Accept guitarist and mastermind Wolf Hoffmann. And because what started as a premiere at Wacken caused a sensation and recognition worldwide, the Symphonic Terror will hit cities live in April 2019.

This can only mean one thing: Accept will debut their great orchestra-tour throughout Europe in 2019 and today, on November 5th the band are pleased to reveal the first tour dates for Germany.

Pre-order for these very special Symphonic Terror shows will start tomorrow, on November 6th at 10 AM exclusively at Eventim. General pre-order start is on Thursday, November 8th, at 10 AM on all channels.

Wolf Hoffmann is already filled with anticipation: "Those who couldn’t be there at Wacken have never seen Accept like this. But it’s definitely worth it! On our last tour, I personally missed the orchestra in some songs. What I can already say is this: There will be some visual and musical surprises on the Symphonic Terror Tour, that you wouldn’t exactly expect from Accept. 2019 will be exciting!“

With the upcoming Symphonic Terror - Live At Wacken 2017 release, fans can expect a unique, 2 hour Accept show, shot on August 3rd, 2017 at the legendary W:O:A, where the band played the biggest and most extraordinary show of their career in front of 80.000 live fans at the festival, on top of thousands more fans watching via the live stream! The show was divided into three parts, showing the full creative power of Accept: The first part hosted the premiere of new tracks "Die By The Sword" and "Koolaid", as well as some of their most popular songs, such as "Restless And Wild" and"Pandemic'. The middle part hosted guitarist Wolf Hoffmann accompanied by a symphony orchestra, presenting the best-of from his recent solo album Headbangers Symphony, which includes metal versions of some of the world’s biggest classical compositions (e.g. from Beethoven, Mozart, Vivaldi,...). And in the last but not least part, fans were able to bang their heads to Accept anthems (also accompanied by the orchestra), such as "Princess Of The Dawn," 'Breaker," "Fast As A Shark" and "Metal Heart," as well as to new songs like "Stalingrad," "Shadow Soldiers" or "Teutonic Terror". The finale could be nothing less than an 8 minute version of their eminent hit "Balls To The Walls"!