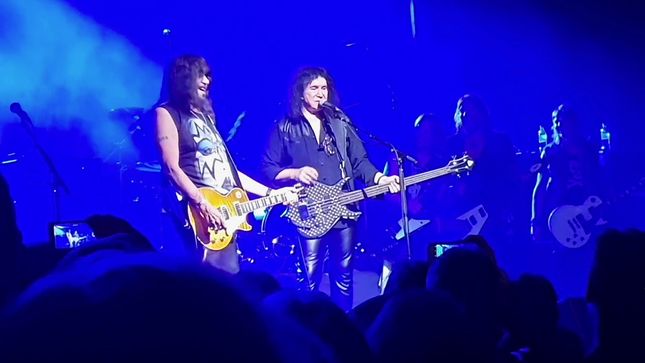 Guesting on The Cassius Morris Show, original KISS guitarist Ace Frehley discussed his new solo album, Spaceman, dropping October 19th, KISS' End Of The Road tour, reuniting with Gene Simmons for shows in Australia and Japan, the state of the music industry, and much more. Check out the interview below.

Frehley: "I think they were better than my current line-up, so I've decided to make a change. They're younger and more hungry."

Frehley rejoined former bandmate Gene Simmons on stage on August 31st at the Enmore Theatre in Sydney, Australia. Video of their performance of the KISS classic "Deuce" can be seen below:

Frehley also joined Simmons at his Melbourne show on August 30th. Watch footage of them performing "Let Me Go, Rock 'N' Roll" and "Rock And Roll All Nite" below:

In an interview with Yahoo Entertainment, Frehley commented on his former band's recently announced farewell tour, saying that "I haven’t been invited" but that he would do it "for the right price, absolutely. It's not something that I'm chomping at the bit to do because my (solo) career has been going up and up and up. But the reason I would do it if it was handed to me in the proper way is for the fans."

In addition, he commented on past conflicts between himself and KISS co-founders, Paul Stanley and Gene Simmons.

"That bad blood thing is over with. We get along great and we have been getting along great for a while. Who knows what's going to happen in the future (laughs)."