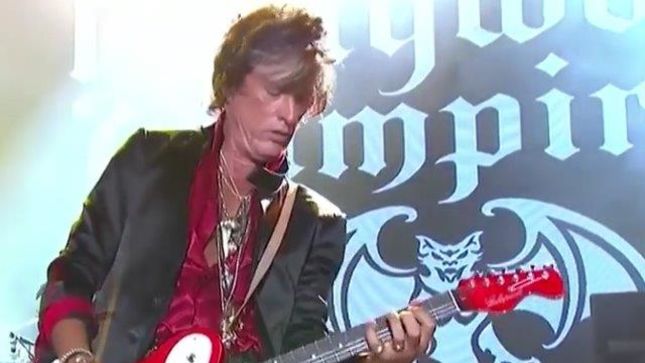 According to The Pulse Of Radio, Aerosmith guitarist Joe Perry has been discharged from Columbia Presbyterian Hospital in New York City after collapsing on stage Sunday night during a Hollywood Vampires show in Brooklyn, NY. He is said to be resting at home in suburban Boston.

According to an update from Billboard, Aerosmith frontman Steven Tyler told them he's placed calls to check on his bandmate and songwriting partner Joe Perry without any reply. "It's starting to scare me a little bit," Tyler says about Perry, who collapsed onstage and was hospitalized Sunday during a show with the all-star Hollywood Vampires in Brooklyn. Perry is currently off the tour, though a statement earlier this week promised that he'll "rejoin his fellow Vampires on stage again soon."

Tyler: "I know they're putting out nothing, but he's recovering, he's really good, he fainted, exhaustion. But I know my brother. He's just about the only other guy that's as passionate about his art as I am. He's always asking me to do three, four (Aerosmith) shows in a row, and I can't. I'll blow my voice out. I know how to maintain my career, my health, and Joe's passionate. I don't think he knows how to. I think he's out there and someone's overbooking him. They're doing like eight or nine shows in a row, or five in a row. I think they're all a little burnt. I think they may need to look at that. Not young anymore, y'know?"

"I'm really concerned and worried right now that I'm not getting any news. I'm a little bummed out, and that scares me. I don't know whether it's heat prostration or whether he's been working himself too hard or getting off on wrong things passionately. I don't know what it is, but I know that nobody's talking to me. I can only tell you that Joe's my brother and I love him so much."