BELPHEGOR Take Us Back To The 90's With New Single "Blackest Sabbath 1997"; Music Video Streaming 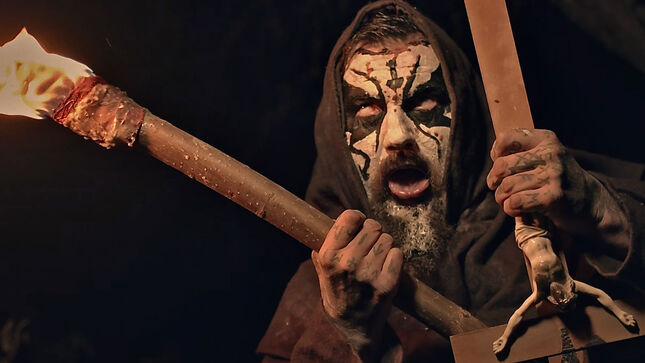 After announcing the ascent of their earliest demons, the reissues The Last Supper (1995) and Blutsabbath (1997) on January 14, European death metal veterans, Belphegor, release a new digital single.

Today, the newly recorded and mixed track, "Blackest Sabbath 1997", sees the light of day - a medley of two songs from the Blutsabbath album. Turn the speakers to the max and check out the full track here.

Of course, Belphegor do not serve that fresh piece of extreme metal without any appealing visuals. Find your audiovisual Antichristmass below.

Belphegor mainman Helmuth comments: "We've rearranged and re-recorded a medley of two songs off the Blutsabbath album [1997] as a promotional single for the re-release of our first two full-length LPs due 14th January 2022 in double CD and single LP formats. Florian Klein, aka Torturer, tracked the drums, and the 'Blackest Sabbath 1997' was mixed & mastered at Jens Bogren's Fascination Street Studios in Örebro, Sweden. It was a thrilling experiment to re-record this song I wrote in 1996 with a new sound wall, our current skills and recording capabilities 25 years later. We hail you demons, enjoy this special offering from us!"

As mentioned above, Belphegor will release their first two albums, The Last Supper (1995) and Blutsabbath (1997), next year on vinyl and together as 2 CDs. The records will be out on January 14 and you can pre-order your little piece of extreme metal history right here.

Helmuth states: "While we are finishing up the last couple of dates of the The Black Rituals tour, we’re proud to announce that we will unleash our earliest offerings upon the masses again! Both albums have been remastered by Andy Classen and will be available in a variety of versions featuring uncensored artwork. Enjoy the first chapters of Belphegor’s diabolical death metal signature sound!“

Belphegor was founded in 1993 and spread like a virus within the underground. Meanwhile, their Bloodbath In Paradise demo has become legendary and paved the baleful path into the souls of thousands of listeners. Anti-religious with nihilistic tendencies as well as provocative topics, Belphegor moved on. The debut album The Last Supper (1995) let the community of followers and opponents grow. Inexorably, the band pushes their destructive ways forward in the following years. Belphegor become louder, more obsessed, and more dynamic, and their albums now have cult status. To think about the scene doesn't work without thinking of Belphegor. In 2008, the band sent their followers to the edge of hell with Bondage Goat Zombie and sparked an all-consuming death metal fire with blasting black metal influences. This masterpiece, inspired by the Marquis de Sade, is one of the most demanding works the genre has offered to this day. Belphegor showed themselves equally brutal and baleful on the successors Walpurgis Rites - Hexenwahn (2009) and Blood Magick Necromance (2011). The band received a lot of great feedback for their intense live performances as well and reached out to a big and loyal fan base.  Their obscure rituals full of diabolical magick have haunted the world several times – next to extensive tours through Asia and Europe, Belphegor has also completed eleven tours through North America and hundreds of open airs.

Their last album Totenritual, internationally lauded by fans and press, dropped on September 15th, 2017, and marks the eleventh hailing from Belphegor.