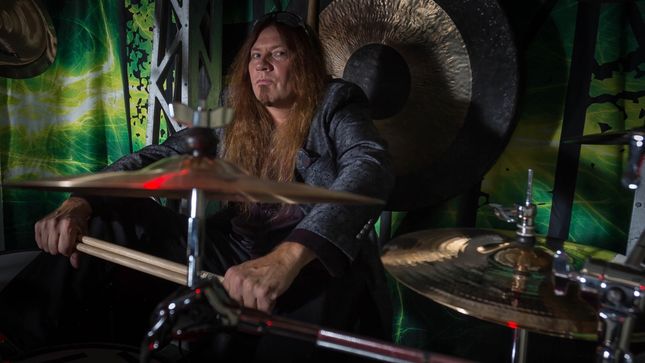 Considered a mainstay among the hard rock drum circuit, Lonnie Hammer has recorded on 17 albums, many of which have become cemented in rock history. Now, the acclaimed singer/songwriter and musician has announced that he is releasing the debut album Total Annihilation by his latest project Hammer Down Hard on Friday, July 27th.

The brainchild of Hammer (Jack Russell’s Great White, Every Mother’s Nightmare, Black Oak Arkansas) with assistance from manager Kim Allegrezza (The Allegrezza Agency), Hammer Down Hard features some of the finest musicians in the hard rock and heavy metal music scene including Justin Rimer (Twelve Stones) on guitar and bass.

"For a long time, I've longed to write and record an album that came straight from my heart. I have been very fortunate in my career as a drummer but over the years so much has been bottled up inside. And although I played drums on this album, I felt it was time to move up front as a lyricist and vocalist and let it all out. It feels great to finally be honest and open up my soul to everyone. This is my story and a tribute to everyone who has struggled and fought for themselves”, said Hammer.

The album, which was written by Hammer and Rimer, was produced by Rimer and recorded at CrossTrax Studios. It is being described by Hammer as a “powerhouse of adrenaline-fuelled, high-energy rock n’ roll with honest, snarling vocals and shear metal fury”.

To create this unique, thunderous, but melodically-driven sound, Hammer brought in some of the most elite musicians in the industry today to make special appearances on the record. The album’s eponymous single, which will be released Friday, August 3rd, features Donnie Wayne Smith from Winger on guitar, just one of many Smith performs. Also featured on the release are: guitarists Wayne Swinny (Saliva), Tony Cardenas Montana (Great White), Brian Quinn (Candlebox), Lou Kavouras (Riot and 2018 Hall of Heavy Metal History Inductee) and Bassist Devin Hightower (Surrender The Fall). But perhaps the most recognizable is Zach Myers from Shinedown who lends his talents to the masterfully-crafted “Who I Am”.

"Things were going really great in the studio and we knew we had some strong songs - strong enough to ask some friends to play on it,” said Hammer. “Things started snowballing after they heard the roughs. Next thing I know we had all these heavy weight players on board and killin' it! What an honour!"

To celebrate the release of the album, Hammer Down Hard will be opening Rock Fest 2018 in Cadott, WI, on July 11th and will be sharing the stage that night with music legends Ace Frehley, Skid Row and Autograph.