BLAZE BAYLEY On Being Fired From IRON MAIDEN - “It Took Me About Four Years Really Before I Kind Of Accepted What Had Happened”; Canadian Entanglement Tour Documentary Part 3 Streaming 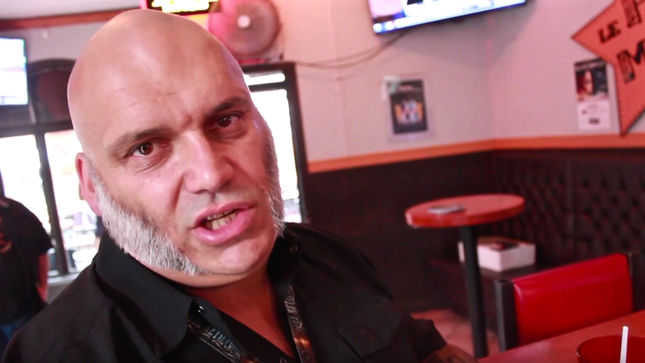 It was announced back in August that Canada's The Metal Voice would be producing a multi-part tour Documentary on Blaze Bayley - Iron Maiden singer 1994 to 1999 - centering on his return from September 21st to 24th for an Eastern Canadian mini-tour. All three parts of the series are now streaming below.

On his exit from Iron Maiden, Blaze states: "I left Iron Maiden, not by choice I was fired. They said I wasn't good enough. I said ‘is Bruce coming back’ and they said ‘yes’. I think what was happening at the time, was that world wide CD sales have gone down. EMI had closed all their manufacturing facilities around the world. The record business was shrinking. Different record companies were starting to come together in different partnerships. So really, I think it was more of a business decision that Bruce came back at the time. I was just gutted at the time and I think it took me about four years really before I kind of accepted what had happened."

Bayley will perform Iron Maiden’s classic track “Run To The Hills” live for the first time on the upcoming Trinity Tour with Tim “Ripper” Owens and Geoff Tate.

Asked why he never performed "Run To The Hills" live with Maiden during his time with the band, Blaze told The Metal Voice: "Well, I thought… What I thought was this really is Bruce's (Dickinson) hallmark song, so on the first tour, I didn't think it would be a good idea — on the first tour — for me to do that song. [It had] nothing to do with the register [in which the original song was sung] or anything; just because people would have a direct comparison and go, 'That's Bruce's song and Blaze shouldn't be singing it.' So that's what I thought on the first tour. But then on the second tour, it just never came up. And I really like that song. I sang it a couple of times and I really enjoyed doing it, and it feels like a lost opportunity to me. So on the Trinity tour, what I'll be doing is I'll be doing my own version of 'Run To The Hills', so I'm really excited about that and really, really looking forward to it. And it'll be the first time I've done it on a tour. I've sung it one or two times — literally just once or twice — before in public, but I'm really looking forward to doing it on the Trinity tour every night. It was one of my favorite Maiden songs — one of the songs that got me into Maiden in those early years."