BLIND GUARDIAN’s Hansi Kürsch On Upcoming Orchestral Album - “2016 And We're Still Not There, But We've Composed The Songs”; Video 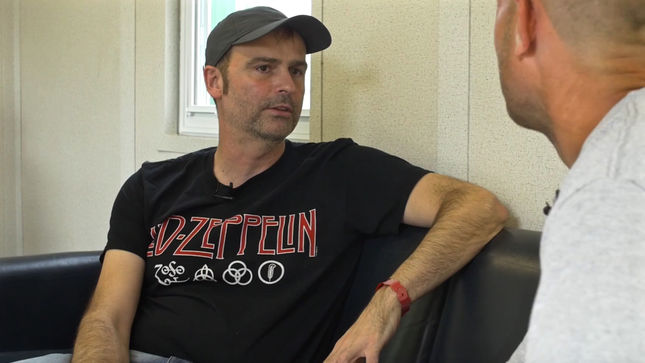 Hansi Kürsch of Blind Guardian guests on this special video edition of One On One With Mitch Lafon.

“In the show's only interview, Hansi Kürsch discusses the band's upcoming orchestral album, mentions Guns N’ Roses’ Chinese Democracy, Axl Rose, the Imaginations From The Other Side album, the current tour, the upcoming live album, going back to playing bass, work on the next new album, and more.”

Glenn Harveston, organizer for ProgPower USA, recently unleashed a bit of news that will make older Blind Guardians in North America very happy. Throughout the band’s upcoming fall tour with Grave Digger, Hansi Kürsch has confirmed that the Guardians will perform the Imaginations From The Other Side album in it entirety.

Before they start their fall tour, Blind Guardian will make a stop at ProgPower for a special performance on Thursday, September 9th. The following day they will kick-off their highly anticipated 19-date tour at The Orpheum in Tampa, Florida. Their trek will include one Canadian date as well as stops in Worcester, Milwaukee, and conclude on October 5th at The Fillmore in San Francisco.

Blind Guardian will be touring in support of their tenth album, Beyond The Red Mirror, which was the highest first-week US sales numbers for the band. It debuted at #132 on the Billboard Top 200 chart, #3 on the Billboard Heatseekers chart, and #6 on the Top Hard Music chart. In Canada, Blind Guardian nearly doubled their first-week numbers from 2010, resulting in Beyond The Red Mirror debuts at #49 on the Top 200 and #4 on the Top Hard Music charts.