BON JOVI Inducted Into The Rock And Roll Hall Of Fame; Video 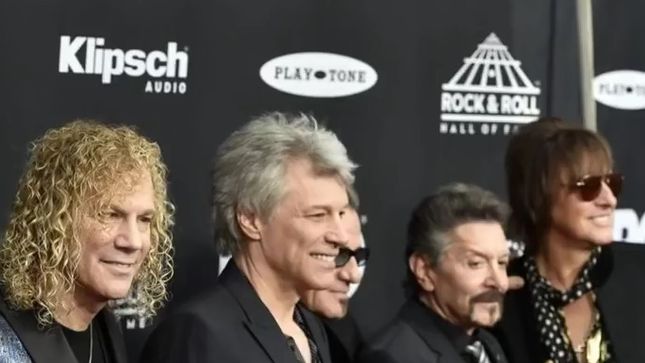 “I’ve been writing a speech like this since I first strummed a broom and sang from the top of the stairs of my childhood home,” said Bon Jovi. “I’ve written it many ways and many times. Some days, I write the Thank You speech. Other days, I write the Fuck You speech. Writing it has been therapeutic in a lot of ways. I certainly see things differently tonight than I would have 10, 20, 30 years ago. In the end, it’s really all about time.”

Former guitarist Richie Sambora added: “If I wrote a book, it would be called The Best Time I Ever Had.”

The band then took the stage for a four-song set that featured: “You Give Love A Bad Name”, “It’s My Life”, “When We Were Us” and “Livin’ On A Prayer”.

“Living On A Prayer”:

“You Give Love A Bad Name”:

Rock And Roll Hall Of Fame Class Of 2018 inductees:

The Rock & Roll Hall of Fame 2018 Induction Ceremony will have its television premiere on HBO, and a radio broadcast on SiriusXM. Broadcast details will be announced in early 2018.