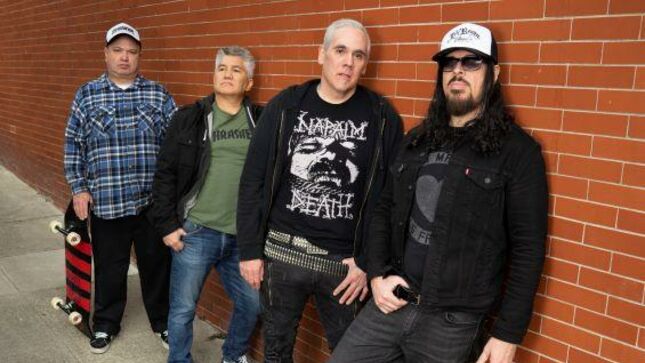 Bay Area skate punk/thrash/crossover band Boneless Ones is back.  After a 35 year hiatus the guys said, “Hey-what the fuck!!!” …That’s three-plus decades of sonic dominance and counter-culture benefaction. Now, The Boneless Ones find their contumacious voice again on Back To The Grind via their own label, Thunder & Lightning Records. “Back To The Grind” and “Crossing Over The Bridge” are the first two singles dropping April 29 at a CD Listening Party at the iconic Bay Area punk-rock venue Oakland Athletic Club. 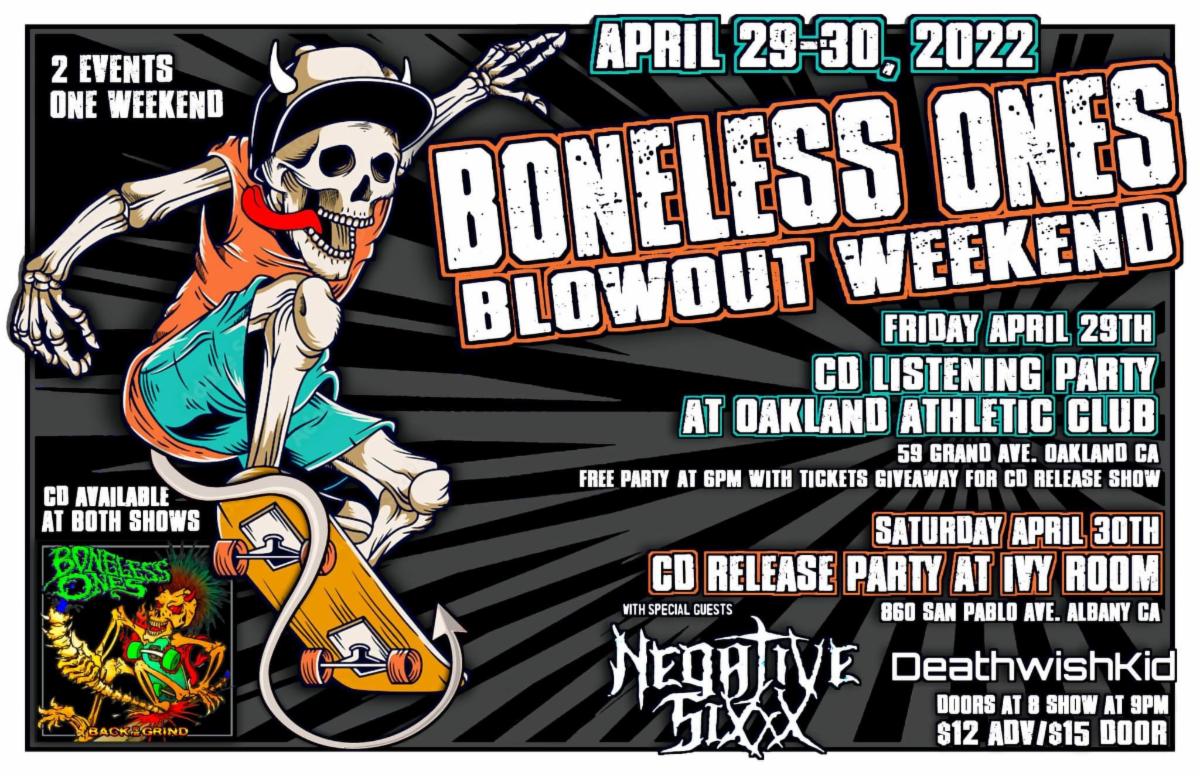 After laying the foundation for West Coast Punk rockers a mere 36 years ago venerated skate punk/cross-over legends The Boneless Ones celebrate their much-anticipated return with new album, Back to the Grind. Featuring founding members Max Fox (vocals) and Troy Takaki (bass) with erstwhile drummer Chris Kontos (ex-Attitude Adjustment, ex-Machine Head) and new guitarist Craig Locicero (Dress the Dead, ex-Forbidden), the Bay Area quartet breathe present-day life into the sounds/customs that crucially bridged punk, hardcore, metal, and skateboarding. In fact, it was appearances on pivotal compilations Them Boners Be Poppin’ (Boner) and Skate Rock Volume 3 - Wild Riders of Boards (Thrasher) that set up debut album Skate for the Devil for near-continuous reverence from the day of its release in 1986 to its most recent re-issue via Beer City Records in 2020.

“We knew what we were doing with Back To The Grind would be well received,” says vocalist Max Fox. “It was from the soul. We started with skateboard music, and there was no concept style-wise of what that was back then, so it was all so fresh. When Beer City Records started talking to us about re-issuing Skate For The Devil, we also started to think about writing a new album. Obviously, the original idea was for The Boneless Ones put out another record after Skate For The Devil back in the day. That didn’t happen. It’s been over 30 years, but we’re finally back!”

“Out of the blue, I got a call from Chris and Max,” Troy Takaki says. “They said, ‘Hey, do you wanna play the Haight [Ashbury] Street Fair?’ The fair had organized reunion shows with all these ’80s bands. After I left The Boneless Ones in ’87, I didn’t really touch my bass again. So, I went to my garage, took out my bass, and practiced for the first time in decades. We eventually agreed to play the Haight [Ashbury] Street Fair show, after which we said to ourselves, ‘Should we keep playing?’ So, we played [skate legend] Randy Katen’s birthday party with Fang in Sacramento in 2019. That was huge—sold out! Then, we played the Exodus benefit show for Tom Hunting. That’s when things started to evolve into what The Boneless Ones are today.”

“About a year and a half ago, Troy and I started putting some ideas together for new music,” says Fox. “The writing was cathartic, joyful—all those things. When Chris returned from doing the anniversary shows with Machine Head, it all started to really gel. We knew we had to continue the tradition of having a great guitar player, so Chris had the idea to ask Craig to join. We got Craig, thankfully, and he really took to it. We set up a songwriting room at Chris's house. We had four songs from our '87 demo, which we reworked together. Then, we wrote nine more kick-ass songs. Writing with Troy, Chris, and Craig was an incredible experience."

“I was standing there at their last show at UC Berkeley in ’86,” guitarist Craig Locicero adds. "I thought, 'Man, that guitar player [Skeels] is way too good for a punk band.' That's what was going through my head. Then, they broke up. When Chris approached me, and after meeting with the rest of the guys, I was stoked. I immediately knew how and where to swing for the fences. Musically, we picked up right where they had left off in ’86. My background is not just technical thrash metal. I have a lot of flavors that I can add to the music. Hardcore punk is one of them.”