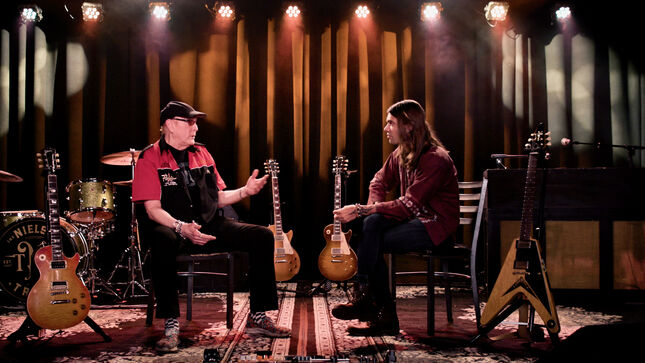 Gibson TV’s Original Series, The Conversation, features intimate conversations between two artists from similar genres but from different eras. They discuss everything from songwriting to touring to playing and anything else that’s safe to share on YouTube.

In this episode, Rock & Roll Hall of Fame inductee and Cheap Trick’s Rick Nielsen sits down with Nick Perri to chat about his early musical life as a drummer, his evolution as a songwriter and player, and his love of buying guitars with history, road scars, and smell, yes smell.

Long before he was rocking a 5-neck custom guitar, Rick was a committed bargain hunter, mostly out of necessity because he couldn’t afford new guitars. But before you break out the mini violins for Rick, keep in mind he once found a ’55 Les Paul Goldtop in a bookstore that he paid a whopping sixty-five dollars for. That wasn’t the only good fortune visited upon Nielsen and his bandmates over the years. Rick fondly recounts the “opportunity knocks” moment when Cheap Trick was asked to open some shows for Queen; a gig that led to “big deal” status for the band in Japan, and an indirect ticket to superstardom back home in the states after the release of the live album, Cheap Trick At Budokan.