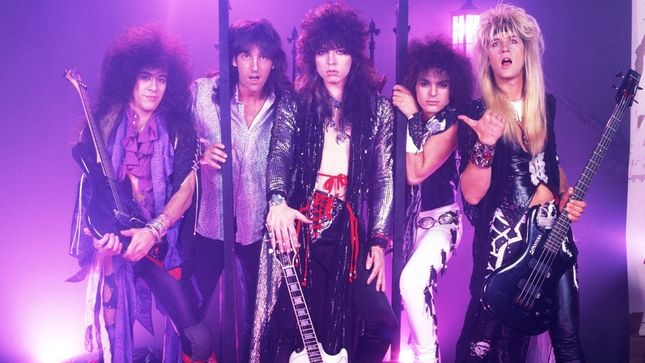 In the video below, Cinderella’s Tom Keifer talks about the making of the Night Songs album cover, photographed by Mark “Weissguy” Weiss.

In the words of Kramer, “It's a coffee table book about coffee tables"; well kind of, see who is talking about The Decade That Rocked:

The Night Songs cover along with 700 other photographs appear in The Decade That Rocked . The book is on its second print run and it was # 1 on the Heavy Metal book charts Amazon from the day it was released on June 2 till the day it sold out in July. For a limited time buy the book and receive a free 8x11 band photo from the album cover shoot, signed by Weiss.

“This really cool photographer that we met called what's his name again? Mark Weiss. That's right, one of my very best buddies and he shot he shot the cover for Night Songs for us and it was a shot in the historic district of Philadelphia, which is where we were from and I believe that structure we were standing in was called Head House Square. But the most interesting thing that I remember about that shoot was the album was called night songs and Mark scheduled to shoot for daytime and I kept saying to him that's not gonna look right . He said ‘I shoot day for night’ and I don't know what the fuck that meant. And I just trusted him because I kind of liked this guy right off the bat I thought he was a straight up cat and sure enough when we got the pictures back it looked like it was nighttime. So Mark Weiss is a fucking genius. - Tom Keifer

On June 2, Insight Editions published The Decade That Rocked: The Photography Of Mark "Weissguy" Weiss. This 378 page hardcover book measures 9.2 x 12.8 inches and weighs 6 pounds. Written by Richard Bienstock, The Decade That Rocked includes a foreword by Rob Halford of Judas Priest, an afterword by radio and tv personality Eddie Trunk, as well as contributions by Daniel Siwek.