DEEP PURPLE Guitarist STEVE MORSE Looks Back On His Early Years - "It Was A Rough Time In The '60s To Be Living In The South And Having Long Hair; It Wasn't Entirely Welcoming" (Video) 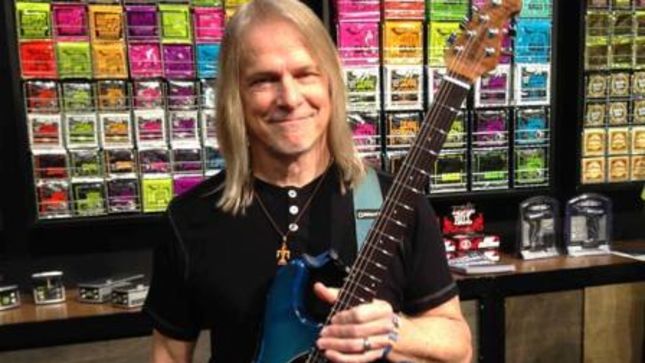 In the clip below, Madcap Music Review's John Golden interview Deep Purple guitarist Steve Morse, who discusses the band's plans for 2016, his early years, his new signature guitar, and Deep Purple's upcoming induction to the Rock And Roll Hall Of Fame.

Says Roger: “We started the next album in Nashville on the 28th January. Thirteen days of pre-production and thirteen days recording in the studio. Lucky thirteen because we have thirteen tracks, all but finished except for vocals. Coincidence or what? How many will end up on he album is hard to tell yet… maybe all of them, maybe not. I won’t even begin to describe the music - an impossible job in any case. Suffice to say I’ve been listening to the rough mixes and there’s a smile on my face.

“Bob Ezrin and the team did their usual superb job. The next stage will be IG and I spending a week together, honing up on the lyrics before recording vocals in Toronto in April.

“It was a real pleasure to meet up and jam with our Nashville friends. It’s a great city to be in, all kinds of nightlife, live music everywhere. It almost feels like being back in the 60s. Don and I went to see Diana Ross with the Nashville Philharmonic one night, the place was jumping, great band, she was exactly what is expected, voice, teeth and costume changes, etc. Jay and Dave of Rival Sons came to visit us in the studio when their tour hit town. We saw them do a fantastic gig that night, what a great band.”

Stay tuned for updates on the new album.

Although statements have been made to the contrary, former Deep Purple bassist Glenn Hughes still hopes to be able to perform when the group is inducted into the Rock and Roll Hall of Fame on April 8th at the Barclays Center in Brooklyn, NY reports Gary Graff of Billboard.