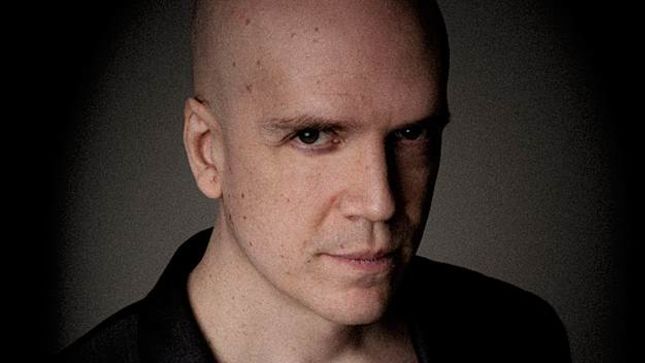 He discusses playing at Download Festival, some of his favorite Download moments, why he is departing from the current Devin Townsend Project sound, how the current sound isn't relevant anymore, focusing on the next album with orchestra and writing “mellow, soft rock songs.”

He throws light on balancing his life as a father and a musician and his opinion on how his music resonates with fans in the ever changing industry.

HEAVY was asked to film the first ever booking reading from Devin Townsend's book titled Only Half There, narrated by Devin himself. This exclusive video was filmed at the legendary Utopia Records in Sydney, Australia just hours before the Devin Townsend Project show at the Enmore Theatre.

Venture into an interesting universe of the man himself for over 40 minutes and learn some interesting facts about him, giggle at some funny stories, discover why he uses a moth in his artwork and much more.

You can order a copy of Only Half There here.

Only Half There is the title of Devin Townsend’s new autobiography, which is available in two editions. The Classic comes with a CD of newly recorded music titled Iceland, and includes previously unseen photos from Devin's scrapbooks.The Signature version is the same book but signed by Devin himself, wrapped in a different jacket material and nesting in a limited edition box. Also in the box are a signed casette of previously unreleased demo recordings titled Ancient, and four unique, small prints of cartoons drawn by Devin.

Check out the unboxing video for the Signature Edition below.

Says Townsend: “I thought writing a book was going to be easy. It wasn’t. Writing about growing up, music, the creative process and connection between personal development and ‘career’ made me think about a lot of other stuff, too. Like the positive and negative experiences of making different albums, and how each one affected me mentally, physically and emotionally. It’s all here, though, from my childhood to working with Steve Vai, forming Strapping Young Lad and the Devin Townsend Project, to Casualties of Cool and finding myself only half there.”

The book is available in two editions, both produced to the highest standard. The Classic comes with a CD of newly recorded music titled Iceland, and includes previously unseen photos from Devin’s scrapbooks. The Signature version is the same book but signed by Devin, wrapped in a different jacket material and nestling in a numbered, limited edition box. Also in the box are a signed cassette tape of previously unreleased demo recordings titled Ancient, and four unique, small prints of cartoons drawn by Devin.

“I started working with Devin on my ‘Sex And Religion’ record and tour when he was still in his teens. I sensed he was more than just a great singer but I did not realize the depth of his brilliance until he started making his own music. I believe he’s an inspired musical genius. I can only say that about 2 people I’ve ever worked with.” - Steve Vai

“Devin is one of the most intense performers I have ever witnessed on stage… when he’s in front of an audience, he becomes absolutely possessed! (But don’t let it fool ya, he’s actually a nice guy…) I also admire his incredible work ethic and dedication to his fans. He’s surely a one of a kind artist.” - Mike Portnoy

“Devin’s talents as a guitar player, vocalist, songwriter and producer are undeniable, but mostly I admire how he approaches all his different projects with such passion and honesty. I’ve had the privilege to work with him on a few occasions and hope this book will capture his energetic and positive personality. He’s had a long and exciting career so far, so this should be a good read.” - Ihsahn

“Obviously a book about Devin Townsend will be a very interesting read. He is one of the most colourful and eclectic musicians out there. His life and his music inspires me very much and I’m proud to call him my friend. I definitely want to have this book on my coffee table!” - Anneke Van Giersbergen

More info at this location.