DOUG ALDRICH Discusses Auditioning To Replace ACE FREHLEY In KISS - "It Was Weird Seeing Those Guys Without Makeup... You Felt Almost Guilty"; Video 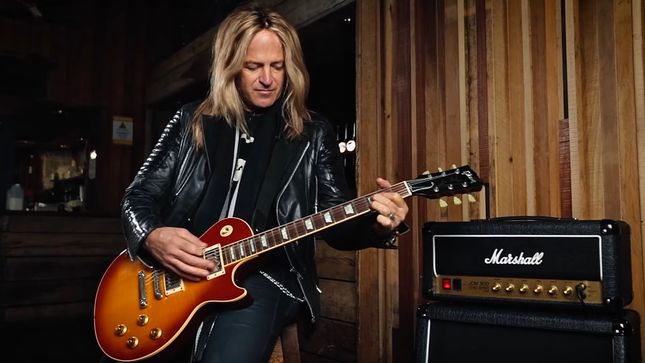 Says Doug: "Basically, I came out to Los Angeles in '81, just after high school, and I immediately started... there used to be this paper that you could advertise for musicians and stuff, and I joined a band with some guys that were looking for other musicians to jam with. We started playing immediately, we were writing songs and also doing covers. We played our first couple of gigs, I can't remember where they were, but then we ended up playing at Gazzarri's on Sunset Strip, it was a famous club, you guys have probably heard of it. One day, a girl came in and said her boyfriend was Eric Carr, and that they were looking for a guitar player for KISS, and she thought that I would be really good for it. I thought it was a joke, you know, just winding me up. We played there a couple of weeks later, and she came and she brought Eric... it was dark in there but I could see his hair, it looked like him but, of course, nobody had ever seen their faces yet. But it was, it was him. I gave him my number at work, I didn't have a home phone at that time. He called my work a few days later, invited me to come down to the Record Plant, and I met Gene and Paul there... it was weird seeing those guys without makeup, 'cause you felt almost guilty. You just feel like, 'OK, no one's supposed to see these guys, and here they're just walking around.' When you haven't seen someone's face, you don't really... of course you knew who the guys were, but you didn't realize what they look like. They looked cool, but it was just weird."

Hear what happened next, below: