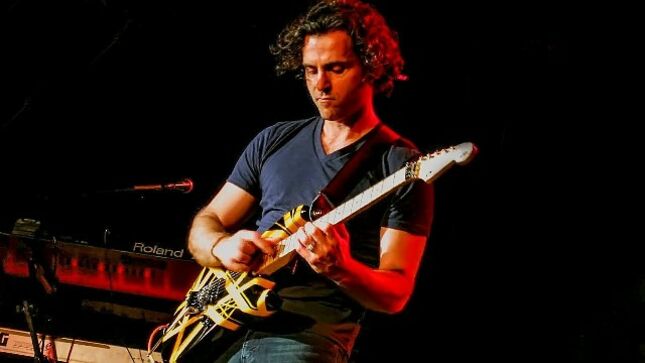 In the latest episode of The Collection from Gibson TV, host Mark Agnesi travels to Los Angeles, CA, to check out the incredible guitar collection of Dweezil Zappa.

Growing up the son of musical icon Frank Zappa, Dweezil began playing guitar as a young child, and by age 12, had released his first single. Dweezil has performed as a solo artist, as well as recreating his father’s music with the project Zappa Plays Zappa. Over his career, Dweezil has amassed a massive collection of odd and obscure guitars, including many of his father’s original instruments, fretless and half-fretted guitars, a microtonal guitar, and a Kramer guitar given to him by Eddie Van Halen during a soundcheck at his middle school talent show. His love of modifying guitars and his quest for new sounds makes Dweezil’s collection anything but ordinary.

Check out the clip below. Dweezil discusses his experiences with Eddie Van Halen beginning at the 41:50 mark.

Dwezil: "Originally, 12 year old me was playing in a talent show at my school. I don't know exactly how this happened but Edward Van Halen came to my soundcheck and I'm playing 'Running With The Devil' with my 12 year old buddies. I'm not only playing one chord wrong, but my guitar's not playing in tune. So Ed drives home, comes back with his guitar, which originally was cream coloured with an orange lightning bolt. He brings that guitar back, puts it on me and he says, 'You're playing it wrong.' He stands behind me, he counts it off with the kids and he does the pick slide, the whole thing. It was the craziest experience. And this is before MTV; you would have never known what rock stars looked like or sounded like unless you met them in this situation. You'd only have pictures in a magazine or what was on the album.

After the show the next day, I called him and thanked him. I said that if you want to come and grab the guitar. Eddie: 'Oh no you can keep that guitar'. So I kept that guitar and I painted it. This was like my homage to the Schwinn bicycle painting of Van Halen-esque guitars. I painted it like this when I was 13."