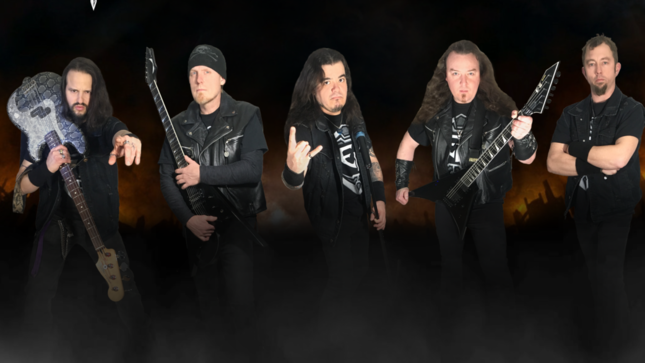 Minneapolis, Minnesota based power metal band Eternal Voyager have issued an update on the recording of their upcoming second album titled Darkened Times.

Vocalist / Guitarist Brian Blake has checked in with the following comment:

“Finally after a long silence being that our debut album The Battle of Eternity came out in 2014, we are almost done with the new album. One of the reasons this took so long was because we had to basically re-record the entire thing. We had a lot of trouble with the drum sound, and drum editing. Long story short, we had issues at the studio we worked with (end of story). It's been a very rough process but we re-recorded all of the rhythms leads and re-doing the bass as well. We also had to redo a lot of vocals. So all of that, has been the process that needed to be done to make the album come out right to our satisfaction.

“In addition we now have a new band line-up. One of the other problems that we had during the recording process was that various band members quit and did not help finish the first round of re-recordings. We did however keep the original drum recordings but we had to re-sample them and do a lot of editing ourselves that was not done in the beginning (did I mention studio problems?). With that said, the new band line-up is amazing and as I've said before is the best we've ever had. Along with long time member Kurt ‘KJ’ Johnson on lead guitar, we ended up with a new drummer. new bass player and new vocalist. Alonso our new vocalist (also the vocalist for US power metal band Unity) has an incredible stage presence and is an energetic force for the band. Our new drummer Mark is the rhythm and the power we needed behind the drums to deliver what we were lacking with the previous drummer. And Jared on bass has really brought a lot of incredible melodies and harmonies that we did not have before. And as for our new record Darkened Times that is now almost done and done now I would say properly, is an incredible achievement. We realized that we need to re-record a lot of the parts and we received much-needed help from some of the new band members. We have now done so many live shows together with the new line-up, that we're definitely more of a team and driving force sound-wise than we were before. I think that it will be reflected on this new record. The new album Darkened Times will be will be mixed in the US and mastered by the great producer / guitarist Stu ‘The Hammer’ Marshall (Night Legion / Blasted to Static / Death Dealer) In Australia.

“Finally, we plan to push this album very hard and get it out to the people who have been waiting for a long time. We also promise that with the new lineup in place, we will start working on a new third album not too long after this one is out. I'd say we learned a lot between the time that our debut album came out and this upcoming 2nd album. It is a fact, that we learned a lot over the last few years. Doing music and being in a band are a learning process and is never easy. But we have definitely come full circle and I think the wait will be worth it for the fans. Eternal Voyager will never give up and will always go on, now that we have the right people to make it happen!”