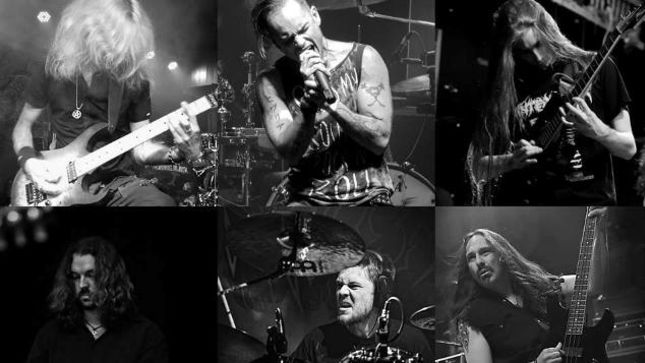 Unyielding will be the follow up to the internationally acclaimed 2016 debut, The Fire Within. This album features several line-up changes for the band, most notably Brazilian vocalist Iuri Sanson (ex-Hibria) and the addition of second guitarist and songwriter Phil Tougas (First Fragment), as well as bassist Mike LePond (Symphony X). Still on board are original guitarist Christian Muenzner, keyboardist Jimmy Pitts and drummer Hannes Grossmann. The album will feature 10 songs of technical, speedy and catchy power metal with a strong emphasis on intense riffing, huge choruses, over the top solo duels and harmony leads and the neoclassicisms found on the debut album.

The album is set to be mixed and mastered in September at Powerhouse Studios in Hamburg by Piet Sielck (Iron Savior). A crowdfunding campaign to help finance the production has been launched. Perks include guest solos offered, digital tabs for both albums, skype guitar lessons and CD bundles.

Band founder Christian Muenzner comments: “I’m extremely happy about the new line up and how the new material turned out. As opposed to the debut album, I’m not the sole composer of the new material anymore, but wrote this album together with our new guitarist Phil Tougas. The songs for Eternity’s End have always been written for a two guitarist situation, so the addition of a second guitarist was the next logical step for this band. Phil and me share many of the same influences, besides our shared background in extreme metal we are both influenced by neoclassical guitar players like Tony MacAlpine, Vinnie Moore, Yngwie Malmsteen, Paul Gilbert, Bruce Bouillet, Joey Tafolla, Jason Becker, Tony Fredianelli, Michael Romeo and James Byrd among many others. We also share the love for '80s US power metal and mid to late '90s German power/speed metal, which will all be evident in the new material.

The writing process for the new album felt very natural, in many occasions one of us had the basis for a song and the other guy would come up with the exact riff or section that was the missing link to complete the piece. Our first collaboration had been on the debut album, Dasein, of Phil’s neo-classical tech death band First Fragment, on which I guested on one of the songs, and we did intense solo trade offs and harmony leads. This worked so well that many people went 'You guys have to do more of this', so here we are. There will be many harmonized solos in the vein of Racer X and Cacophony on this album, as well as triple harmonies and three part solo trade offs with our keyboard player Jimmy Pitts, so all the guitar nerds and shred freaks should watch out for this release.

Phil and me have been fans of Iuri Sanson’s vocals since we first heard the Hibria debut album Defying The Rules many years ago, to us he is the best metal vocalist currently around. The new material is a lot more aggressive, technical and in your face than the songs of our debut album, and Iuri’s voice fits the new material just perfectly.

The contact to bassist Mike LePond from Symphony X came through our keyboard player Jimmy Pitts. We are all big fans of Symphony X and Mike plays the exact style we were looking for on the new songs, going over the top and matching the shredding skills of the guitars where needed in places and providing a solid, locked in heavy metal groove with the drums in others.

The drums will be provided once more by my long time partner in crime Hannes Grossmann with whom I have been making music since more than 15 years now. I can’t think of a more perfect match for my songs.

We faced a little bit of bad luck with the situation with our old label Power Prog for The Fire Within, but we hope to get some better promotion and distribution the second time around.”

Guitarist Phil Tougas comments: "Becoming a part of this band and helping write the album has been a surreal experience. Not just because the members all played in bands I've been worshiping for many years, but I'd say it's also mainly because of how it all came together. The moment Christian asked me to join, we simply churned out riffs non-stop, day and night, as if our lives depended on it. It was so productive that we already have song ideas for another album. Our writing styles mashed together instantly, and being given the chance to contribute full songs to the band was very fulfilling. Sure, we do share the same influences and taste and all that, but it's this drive that we all have in common as well as this unquenchable thirst to write truly empowering and epic hymns that made us into the cohesive unit that we are now. I don't see Eternity's End as a side project. There is too much passion in these riffs for this band to just be something like that. I look forward to releasing this album and playing this material live."

Check out the Crowdfunding campaign here. The Eternity's End Facebook page can be found here.