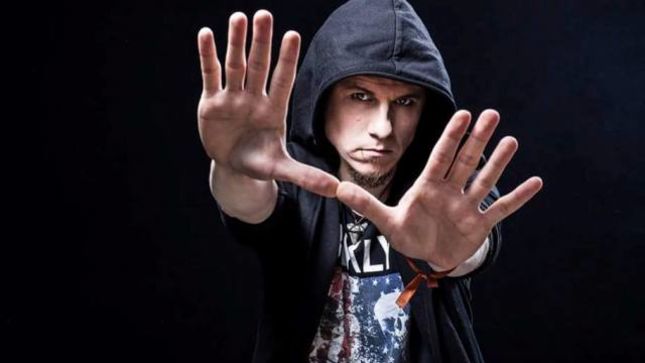 Since the October 2016 release of Amaranthe's fourth album, Maximalism, vocalist and co-founder Jake E. has been conspicuous in his absence from the touring trail and in the press. The band's triple vocalist attack remained intact for the band's 2016 European tour, however, thanks to Smash Into Pieces singer Chris Adams, who had stepped in for Jake on previous tours when he was honouring other commitments. In November 2016, Jake issued a statement hinting that he had run out of steam, announcing that he was taking a break from the band for an unknown amount of time. In an exclusive interview with BraveWords, Jake makes his departure from Amaranthe official and final. Read on...

"Me and Olof (Mörck / guitars) started the band seven or eight years ago, and everything took off in a way we couldn't have imagined," Jake begins. "Amaranthe became a huge success and we toured the world, and we had a lot of fun doing that. The first two albums (self-titled debut and The Nexus) were exactly what I wanted the band to sound like; a mix between those Soilwork-like guitars and melodic Bon Jovi-type vocals combined with a female voice. Different elements combined, but the main thing in the music was the metal base. On the Massive Addictive album it started to change into something else that I didn't really control, and you can hear the songs that I was more involved in working on are very metal. When we started working on the Maximalism album I found that it wasn't the Amaranthe I had helped create at the start. It wasn't my vision at all and I realized that I had to be true to myself. That was back in March 2016. I love to tour, I love the fans, but I felt that if I wasn't true to myself."

"My idea from the beginning is that we were supposed to be six people in a band striving for the same goal. Nobody had ever seen three singers in a metal band in that formation before, and that was my whole selling point for Amaranthe. We should be marketed as a band with three singers and it worked on the first two albums, but I felt that my place both on the albums and live was reduced; I felt like I was superfluous."

Truth be told, it becomes clear upon repeated listens to the Maximalism album that, by accident or design, Jake does indeed play a reduced role in the songs compared to Amaranthe's previous three records. More often than not he can be heard harmonizing rather than offering stand-alone performances.

"I know my potential as a singer and a songwriter, but over the last couple years I felt I wasn't reaching that potential," says Jake. "You can hardly hear me on the new Amaranthe album. I have a small part here and a small part there, so I started to feel more like a backing singer. I'm 35 years old, and I decided I have to continue with music that makes me happy. Meeting the fans makes me happy and touring is the best thing I've ever done, but I can't stand on stage not believing in what I'm doing. That's the main reason I left Amaranthe."