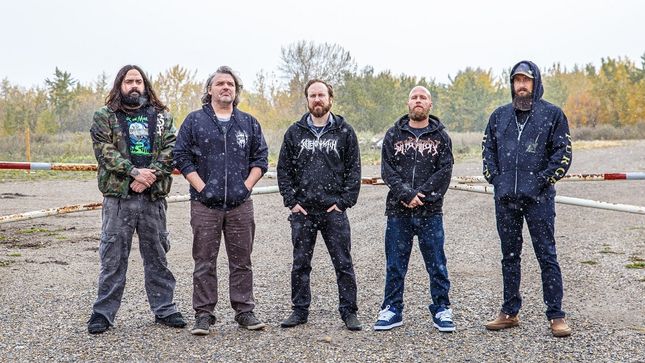 Comprised of several musicians with a long history in Calgary’s metal scene (Culled, After Earth, Meddigo, False Flag, WAKE, Disciples Of Power, Exit Strategy, and Razorwing), Third Chamber is cooking up a new, yet familiar death metal sound that will nourish even the pickiest of metal enthusiasts. Set to unleash their debut EP Harvesting Our Decay on November 22, 2019, the band is ready to offer their next single 'Terror Formed' on BraveWords!

With death being the main ingredient in their metal melting pot, hints of grindcore and hardcore also stand out amidst flavours of politically charged lyrics. Third Chamber is not music for the soft, besides being musically ferocious, the lyrical content is a brutal reflection of the current state of the world. From negative motivations of religious organizations, the effects of social media on mental distress, the ever-growing pride of ignorance, the exploitation of our natural resources for the profit of the wealthy and the manipulation and lack of actual truth in most media consumed by the ever-growing bewildered herd.

The band explains “Terror Formed”: "This track is about media consumed by a majority of society that is fear-mongering bull shit riddled with stories design to strike fear and spread hate. A media that benefits on chaos will not hesitate to help create what it needs to survive and keep people plugged in."

Third Chamber is for fans of Black Dahlia Murder, Suffocation, At the Gates, Misery Index, and Napalm Death. Listen to “Terror Formed” below.

Third Chamber will be hitting the road for four dates across the province of Alberta In November and December.