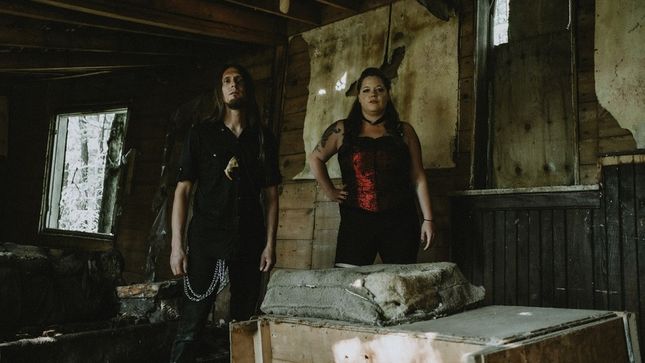 Within Nostalgia announced their album Void And Decay recently with the first single “Desideratum” and now they present a second “Beneath Unworthy Presence”. The single continues the band’s proclivity towards honest and haunting music, and this release reflects a personal and unique journey. Within Nostalgia hopes that listeners can relate to the music and lyrics in a meaningful way and be able to gain their own perspective from it.

Currently, the band is a duo between founder Alyssa Broere (rhythm guitar/bass/vocals/drum programming) and Kyle Bell (lead guitar/bass/drum programming), who have been working on this album since the release of 2019’s “Conjuring A New Reality”. Now with a firm grip on the creative trajectory for the band, the sound had morphed into what is meant to be the truest form of Within Nostalgia.

“Beneath Unworthy Presence” takes the listener on a journey in the sense that there are many parts, ranging from harsh vocals, blast beats, and double bass to clean vocals and almost a “dance-y beat”. The band further explains the track:

“It was the third song written for the album and represents many different aspects of the genres that inspire us. This song goes into the concept of humans not being worthy of this earth because of the damage that we do to it on a daily basis. It talks about the natural karma that takes place here and how natural disasters happen as a way to depopulate and show us who really is in control. 'Trees shall grow beneath unworthy presence' represents the fact that nature will continue to thrive and take back what is rightfully its own.”

Powerful and unique, Within Nostalgia is recommended for fans of Agalloch, My Dying Bride, and Nachtmystium. “Beneath Unworthy Presence” can be heard via its premiere on BraveWords below!

Void And Decay is out December 18. Preorder here.