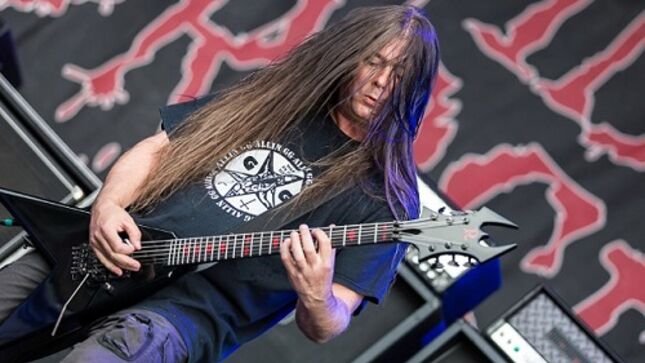 Cannibal Corpse guitarist Pat O'Brien was arrested on Monday, December 10th, 2018 and charged with "aggravated assault on a law enforcement officer with deadly weapon and burglary occupied dwelling with assault or battery." According to the Hillsborough County Sheriff’s Office, O'Brien was released on Friday, December 14th, 2018 at 9:01 PM, after posting a $50,000 surety bond.

On December 10th, 2018 at approximately 6:57 PM, Patrick O'Brien entered 4732 Windflower Cr, to which he did not have permission from the owner/victim, nor did he know any residents at the above listed address. The residents ordered the defendant to exit the home immediately, at which point Patrick O'Brien pushed one of the residents to the ground against her will and fled into the backyard. When a deputy arrived, Patrick O'Brien would not obey his lawful commands and ran towards the deputy with a knife in his right hand.

O'Brien was contained using a taser and was taken into custody. He was charged with Aggravated Assault on a Law Enforcement Officer with Deadly Weapon and Burglary Occupied Dwelling with Assault or Battery.

It is now being reported that O'Brien was sentenced on March 16th, 2021 to time served and five years probation. He was also ordered to pay $23,793.45 US, is expected to put in 150 hours of community service, and will be subject to random testing for drugs and alcohol, which he has been orderd to abstain from.

"As a band and as individuals, we all want nothing but the best for our brother and partner, Pat. While we can offer no further information about the incident, we wanted everyone to know that Pat is getting the help he needs and appreciates the love and support from Cannibal Corpse fans around the world. Pat is currently with family and friends and looks forward to a healthy return at some point."

In January 2019, Cannibal Corpse announced that Erik Rutan would fill in for O'Brien on the road. In February 2021, Rutan announced he had officially joined the band as a full time member. He appears on the band's latest album, Violence Unimagined.