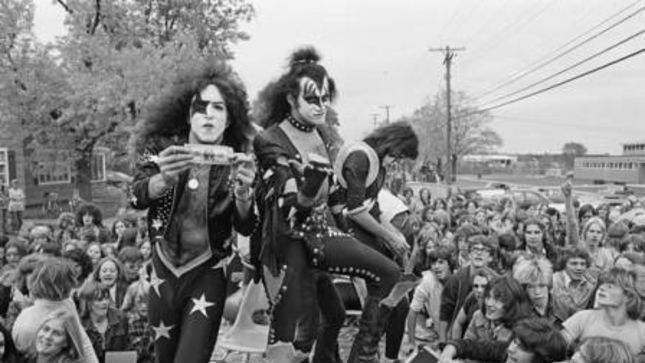 Rock n’ roll history was made in 1975 when KISS drove to the small town of Cadillac in northern Michigan to join their homecoming celebrations. In 1974, the town's football team, the Vikings, playing KISS albums in the locker room before and after games, won seven straight games and wound up conference co-champs. Word spread to KISS of the team's success and the band's members decided to visit Cadillac the next year for a raucous Homecoming weekend.

Listen to Gene Simmons and Paul Stanley share their memories about Cadillac on the WKLT morning show crew with Cadillac's Jim Neff as they reminisce about the KISS visit to Cadillac in 1975 and look forward to the 40th anniversary in 2015. The Gene Simmons interview will air at 8:15 am on Tuesday, September 29th. The Paul Stanley interview will air on Wednesday at 8:15am on Wednesday, September 30th.

Listen to WKLT in Northern Michigan on 97.5 and 98.9, online at WKLT.com, on TuneIn Radio, and on the WKLT app. Both interviews will be available on podcast later in the week.

An exclusive KISS Cadillac T-shirt will be available during the the KISS Cadillac Homecoming 40th Anniversary Celebration on October 9th - 10th. The shirts have been officially licensed by KISS and will be in limited supply.

The design is elegant in its simplicity. The front of the black T-shirt will feature the official traditional KISS logo. Below that will be “Cadillac” is large letters. On the sleeve will be “1975-2015, kisscadillac.com.” Event co-chair, Joy VanDrie notes: “Our KISS Cadillac T-shirt has never been seen before and will never be seen again.”

Jim Neff, event co-chair, explains that the license agreement is very specific. “The shirts cannot be sold online or at a retail establishment. They can only be sold at the KISS Cadillac event or at the Cadillac Area Visitors Bureau. All proceeds must go toward the KISS Cadillac monument fund (a charity).” 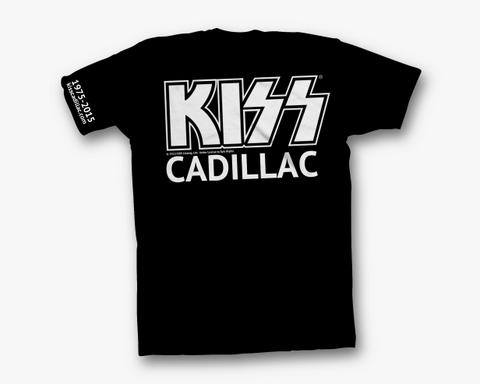 The demand for these one-of-a-kind shirts is sure to be very high. In order to be completely fair to everyone, the KISS Cadillac planning committee felt that those people supporting the event by purchasing a ticket to the KISS Cadillac tribute concert (October 10, 2 PM, featuring the World's Best KISS Tribute Band, Mr. Speed) should have the first opportunity to buy a shirt. All net proceeds from the concert go to the Cadillac Viking Athletics Boosters and Cadillac Viking Band Boosters.

The only way to positively guarantee getting an event T-shirt is to buy a VIP concert ticket, because a shirt is part of the VIP package. VIP tickets are available only online at kisscadillac.com.

General admission ticket holders will have an opportunity to buy a shirt as they enter the concert. These shirts will be $10, cash only, and one T-shirt per concert ticket. First come, first served. Tickets will be marked indicating a shirt sale. (General admission tickets are available for $10 online at kisscadillac.com or at the Cadillac Area Visitors Bureau in downtown Cadillac.)

For those who want to purchase shirts prior to the concert, the Cadillac Area Visitors Bureau will have an “early pick up” for both VIPs and general admission ticket holders on October 7th - 9th from 12:00pm - 4:00pm. VIPs can pick up their packets. General admission can show their ticket (or buy one at that time) and purchase a shirt. Tickets will be marked indicating a shirt sale.

After the KISS Cadillac event, any T-shirts remaining will be sold at the Cadillac Area Visitors Bureau to the general public. “Overall, this sales policy is the best way to give everyone a fair opportunity to buy a rare piece of official KISS memorabilia,” says Neff.

KISS Cadillac Homecoming 40th Anniversary Celebration information is on the event website at KISSCadillac.com and on Facebook here.