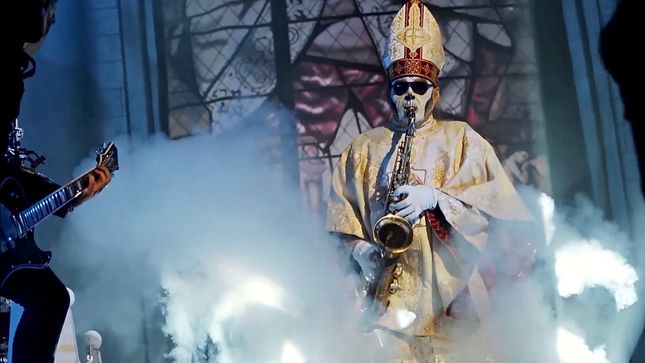 Sweden's Ghost hit the North American road last week at Freakers Ball in Grand Prairie, Texas with its A Pale Tour Named Death, a 40-date headline trek. The tour will include two arena shows: November 16th at the Los Angeles Forum, and December 15th at New York's Barclays Center. To get a glimpse at the band's spectacular theatrical stage production that may be coming to your town, check out the video clip filmed at Ghost's recent sold-out, headline performance at the UK's prestigious Royal Albert Hall.

Ghost is well-known for its "an evening with" stage shows that are presented in two acts with an intermission. For A Pale Tour Named Death, frontman Cardinal Copia and the now expanded band - seven Ghouls and Ghoulettes - are presenting a two-hour program on a striking stage set performing some of the band's most popular songs from Ghost's albums and EPs catalogue. The set list includes "Square Hammer," "Cirice," "Ashes," "He Is" and "Year Zero." The band is also preforming its new single, "Dance Macabre," currently #14 at Active Rock Radio; the companion video, is a romantic and erotic look at a defining encounter in Ghost's past.