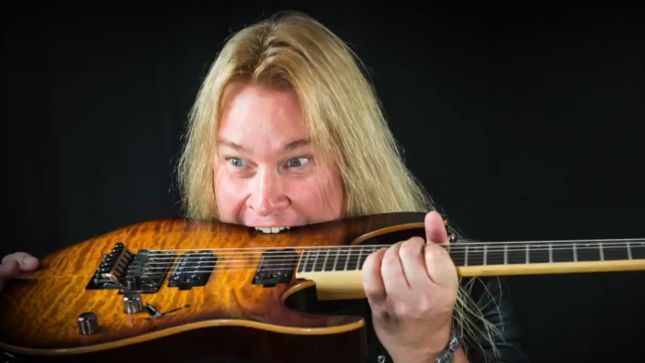 Back in September, former Megadeth / King Diamond guitarist Glen Drover ended several years away from the metal scene with a new song called "Discordia". It was an unexpected collaboration with Queensryche vocalist Todd La Torre showcasing Drover's return from his prog fusion Metalusion band/project and the more aggressive side of La Torre's talents. The vast majority of Drover fans loved it. And while he was already committed to releasing a second full-on metal bloodletting, the success of "Discordia" served to strengthen his already ironclad resolve. He made certain his return to metal was a strong one with "Discordia", and new song "Walls Of Blood" featuring Untimely Demise frontman Matt Cuthbertson is the face-ripping follow-up that stands to surpass its success.

"You know what? Not to sound 'whatever' about it, but I believe the same thing because of the strength of the song," says Drover. "I'm really happy with it and excited to see how the people respond to it. You have to believe in your work before anyone else does, and there was lots of confidence and belief in 'Walls Of Blood' when we put it together."
"I think it's just the new mindframe I have right now," he says of his full-on return to churning out his brand of metal mayhem. "Doing 'Discordia' with Todd gave me a clear picture of a path forward. It's a lot less work doing a single rather than an album, obviously, but you put more focus on that particular song. 'Discordia' kind of wrote itself and things came together, so we put it out for fun."


Drover says he could probably put out an album's worth of metal if he wanted to, but he's enjoying the single-by-single process at the moment.

"I think it's because of the industry at this point. As you know there's so much product coming out every five seconds, so between that and the low attention spans - and that's nobody's fault, really - it's a case of option anxiety. So, I decided that instead of doing a full length album that I'd do some singles. When I put out 'Discordia' with Todd and saw the results of that, like hitting #5 on Amazon, I realized this is a good way forward. I knew we had a good song with 'Discordia', so when me and Shawn (Drover) were putting 'Walls Of Blood' together and discussing who would be a good candidate to sing on it, one of the first guys I thought of was Chuck Billy (Testament) because we'd talked about doing a song together once before. Shawn suggested asking Matt, which was really easy to put together since I've worked with the band before producing their stuff."

Backing up a moment, you did read that correctly; Drover's brother Shawn and former Megadeth bandmate - and the other half of the Eidolon creative team - had a hand in writing "Walls Of Blood" even though he didn't play on the track.

"Shawn doesn't play on the song but he wrote the lyrics and the arrangement of where the vocals were going to go," Drover reveals. "Matt went in and did his thing, and it came out great. We looked at it as a trial and error situation, where if the vocals didn't work out with one person we'd try with someone else, but we hit it right off the bat with Matt. Shawn might have even refined a couple riffs on the song, too. I think he did, but that's a common thing between me and my brother. I'll do something and he'll feed off it, and vice versa. We've been doing that since we were kids. It's a natural communication."


Cuthbertson is understandably stoked to have his voice on a song written by the Drover brothers. He couldn't be more pleased with the end result.

"Like with everything that has happened with Untimely Demise, I'm blown away," Cuthbertson admits. "I love how everyday I wake up and there's the possibility of some crazy opportunity that I could have never dreamed up on my own. As far as what I wanted to do with the vocals on 'Walls Of Blood', I just wanted to do what I'd done before when Untimely Demise recorded with Glen. That's why Glen and Shawn picked me to do this in the first place."

And how does Cuthbertson respond to claims that he sings like a girl, specifically Angela Gossow?

"To anyone saying I sound like Gossow, I love it. Chuck Schuldiner and Angela Gossow are by far the biggest influence for me wanting put distorted vocals into my style. Any time my music can be correlated with Arch Enemy in any way, I take that as a huge compliment."


Ultimately, no matter how strong Drover's work is outside the metal realm, such as his Metalusion prog fusion project, the vast majority of fans will always want to hear Glen Drover the shredhead laying down the law.

"That's fine," he says, "and you know that I've always done things because I want to, not because I think I should or because it's going to gain me popularity. Those stupid plastic reasons don't exist in my world. It's all about music and how I feel at the time. The Metalusion thing was what I wanted to do then, because after being in Megadeth for years I wanted to do something that wasn't complete metal. My mindframe is more metal now. I always try to please myself first. I have my faults but I'm anything but fake."


Check out "Walls Of Blood" via the BraveWords audio player here.