GLENN HUGHES - “I Haven’t Done A Cycle Of Touring Like This Since DEEP PURPLE”; Audio 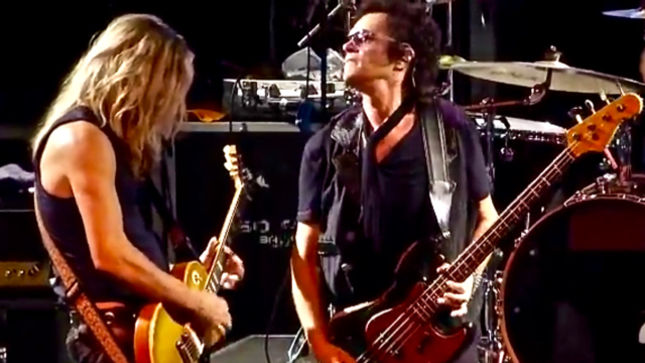 Speaking with Metal Shock Finland, Glenn Hughes discusses how he came to be doing his solo tour:

“I’ve got a lovely story to tell you – I’ve been coming from Black Country to California Breed and saying to myself earlier this year with my new management company, okay what do we do now? Do we form another band, do we make a record, do we film a documentary or do we go solo? My manager said ‘I think we should go solo’, then within a week we had so many offers coming in around the globe that we are now (which I haven’t really spoke to anyone about it yet), we’re now extending my tour through all of next year. I mean, I haven’t done a cycle of touring like this since Deep Purple. I think for me, if I had my choice right now to make a record or continue touring, I have to say that the appeal for me at this moment in time in my life, working with the people I’m working  with, behind the scenes and on stage, is the appropriate time for me to sing and play my music live.”

With recent sold out live shows in South America and Europe, Glenn Hughes is extending his Solo Tour throughout 2016, beginning with new spring shows in the US.

Joining Hughes for his US shows, will be Doug Aldrich (Revolution Saints, ex-Whitesnake, Dio) on guitar, and powerhouse Swedish drummer and longtime solo band member, Pontus Engborg rounding out the trio. The set will showcase highlights from Glenn's colourful career: Trapeze, Deep Purple, Hughes/Thrall, Black Country Communion along with his solo material.

Support for the tour are Joanne Shaw Taylor, plus Jared James Nichols.

On the announcement of his new shows in the US, Glenn comments: “I am thrilled to announce that I will be on tour in the USA. My first leg will start on March 2nd thru March 26th. On the agenda for the whole of 2016 is all about live shows, I have not done an extensive tour in quite some time and I feel now is the appropriate time, as my fan base is growing. We have completed a sold out South American tour, and now playing across Europe.

Happy to announce that Doug Aldrich, Ex Whitesnake and Dio guitarist will be by my side. On drums will be my drummer of 8 years, Pontus Engborg, a powerhouse. This is a rock show, my Power Trio, my career started in a trio, that band was Trapeze, who had success in the USA prior to my joining Deep Purple. Here we go... see you down the front.”

Hughes has the following UK dates lined up for October/November: