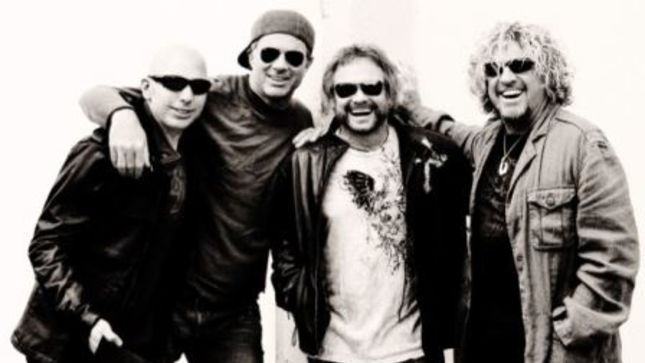 Satriani: "It looks like we’re going to do a show in the middle of May. I don’t think it’s public yet, but I don’t really care if you mention it. We’re getting together, just one show, the original band – I think it’s a Lake Tahoe show – we’re kinda working around the schedule of Chad, who’s got a rehearsal schedule at that point with the Chili Peppers, I’m in between my US and European tours, and I know there’s a Benioff Children’s Hospital benefit that I do with Sammy and James Hetfield, which comes up about a week before that.  And then we’ve got a track that’s pretty much done, it’s about 99% finished. We actually recorded a song; we’re the slowest working band in history, we take forever. But there is stuff happening, and we’re still laughing and communicating.”

Chickenfoot have been largely inactive since 2012 when they toured with Kenny Aronoff on drums due to Chad Smith's busy schedule with the Red Hot Chili Peppers. "Joe really keeps Chickenfoot's foot on the fire," said frontman Sammy Hagar in an October 2015 interview. "He really wants the band to stay together, and we have definitely not broken up."

Their 2011 LP Chickenfoot III was a commercial disappointment and Hagar has no interest in recording another one, but the group did come together recently to cut a new tune. The process began when Smith had an opening in his schedule and Satriani sent around some music he had put together. "I wrote the lyrics while on an airplane to Cabo," says Hagar. "It's a dark tune, but it's fucking cool. I'm thinking about calling it 'Divine Termination.' It's a really raw production and a giant step for the 'Foot." Hagar hopes to get the song to fans sometime next year, possibly by giving it away alongside a new Circle track when fans buy tickets for the proposed tour.