HAMMERFALL Back In The Studio; New Album Out Early 2022 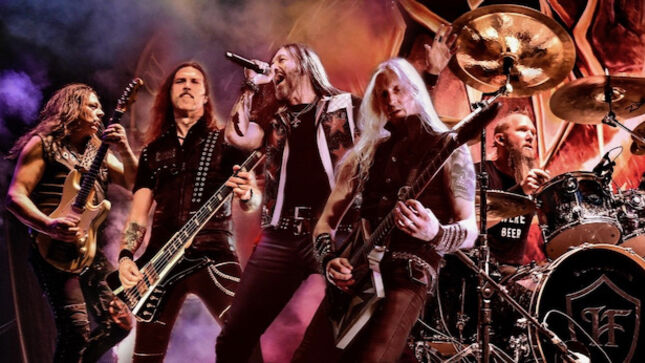 Swedish power metal brigade HammerFall are back in the studio working on the follow-up to 2019’s Dominion. The studio album will be released early next year through Napalm Records.

“Out of the five of us, Fredrik [Larsson, bassist] was probably the most excited about finally being back in the studio, and it really showed! He did a tremendous job recording, his bass lines creating the perfect foundation to build the rest upon.

“Special HammerFall TV [the band's YouTube channel] episode on Sunday, November 28, where we will talk a bit more in depth about the recording. Stay tuned for details!”

The result is Renegade 2.0, out now via Nuclear Blast Records in many beautiful formats and with a brand new album artwork made by famous cover artist Andreas Marshall, which makes every HammerFall fan heart beats faster.

In these new videos, Oscar and Joacim discusses how the success of Renegade changed the metal climate, and "The Way Of The Warrior" and how the Mandalorians stole the phrase.